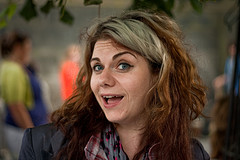 Moran was crucified, left, right and centre as if she was the new poster girl for the English Defence League. And all over an interview for The Times that Moran herself hardly touted as hard-hitting journalism when she plugged it in a tweet thus: "Girls starts in Britain this week, and I went to talk to Lena Dunahm about why I love her face so much."

There has already been plenty of criticism of Girls for the all-white lead characters. Would Moran asking the same question have added anything at all to the discourse? Was she under any obligation to ask a question that is already out there? It reminds me of the time, as a 21-year-old journalist, that I asked a recently separated politician in Australia about her break-up. She didn't want to talk about it. She was perfectly polite about not wanting to go into details and I felt like a bit of a dick for asking the question. It wasn't relevant to the interview and it was a topic that had already been given plenty of airplay in the media at the time.

Dunham telegraphed why she didn't include any women of colour among her main characters when she told NPR: "I am half-Jew, half-WASP, and I wrote two Jews and two WASPs."

It is not unusual for any writer, regardless of race or religion, to write fictional pieces about stuff they know about. If Dunham didn't feel qualified to write authentically about the experiences of people of colour, she could perhaps be accused of lack of imagination. Or accused of not getting in some ethnically diverse co-writers to help her out. But what if she did include a non-white character and it didn't ring true? Would this cause the same people who have jumped down Moran's throat this weekend to then accuse Dunham of tokenism?

I'm a journalist and an editor, I deal in non-fiction day in, day out. As such, I'd be perfectly confident in interviewing a woman of colour about her life experiences for a journalistic article, but I'm not so sure I'd be as confident writing a work of fiction from her point of view. I am not about to write a novel or a TV series about a woman of colour but that's no reason why anyone else, with a better imagination than I have, or with that particular life experience, or anyone more confident than I am, shouldn't give it a go.

Maeve Binchy, the late and lovely Irish writer, was frequently quoted as saying that her books didn't include explicit sex because it was something that was not part of her experience. She was worried that if she invented elaborate sex scenes, they would be unconvincing. That was a wise move and it saved her from winning The Literary Review's annual bad sex awards. There was no backlash from the bondage and discipline community, who felt Maeve ignored their experiences.

Of course, I am being churlish in comparing public misunderstanding of the B&D scene with the absence of ethnically diverse characters in a TV series. But while it is important for the media, for TV producers, film-makers and book publishers to be mindful of diversity and to try and give voice to as many people as possible, it is ridiculous to try and force every single writer to include every single group in the community in every work of fiction.

It is important for the people who commission TV series, who decide what books get published, who produce movies to think outside the square, to seek out stories that might not otherwise get told. Fear of bad box office stifles the diversity of movies and fear of poor ratings stifles the diversity of TV scripts. Saturday Night Live and The Daily Show have been criticised for not having a diverse enough bunch of people in their respective writing teams. Yet nobody ever really questions the lack of diversity in, say, the films of Judd Apatow. (And he is the executive producer of Girls...) Why do some writers get a free ride while others are put under scrutiny?

My mum would have said Moran could have been more polite in her response to the question. But the 140-character world of Twitter doesn't lend itself to nuanced responses on serious issues. It was an honest response and it doesn't make her an instant Klanswoman. Moran pointed out that other issues, such as sexuality and class diversity, are also poorly represented. Hell, perhaps she also should have asked Dunham about lack of a B&D storyline or why Girls doesn't feature regular outings to Cannery Row...

The situation, as these things tend to do in the online world, snowballed and suddenly people were criticising Moran for blocking people, for not apologising, for the tone of her responses (in a format where tone is often sadly lacking except for excessive use of exclamation marks and emoticons). Then there were the accusations of "privilege". It was odd that the "privileged!" accusation was levelled at someone who came from a poor background, worked hard to get to where she is today and writes extensively on the misconceptions of poverty in Britain based on her own experiences.

And what is truly sad is that this whole Twitter shitstorm has seen women, all of whom identify as feminists, turn on each other to the point where the original race issue has become secondary. That is always an unedifying spectacle. When that happens, it means plenty of people literally won't give a shit - about feminism.