Airline food: it sucks but it's not oppressive 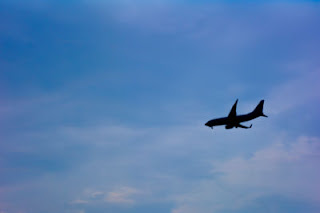 A hysterical press release has just landed in my inbox. The less-than-snappy headline is: AIRLINES TAKE NOTE! YOUR FULLY LOADED CARBOHYDRATE MEALS ARE NOT SUITABLE TO THE EVER INCREASING NUMBER OF WOMEN TRAVELLING IN YOUR PASSENGER CABINS!

Like most stupid press releases, this one is the result of a survey. According to maiden-voyage.com, "the business travel network for professional women" (who clearly don't care about the virginal undertones of the website's name) and inflightfeed.com "dedicated to highlighting pre order and buy on board airline meals" (whoever wrote this press release only has a passing relationship with punctuation), "76% of women surveyed feel that airlines are not doing enough to cater to their needs."

The survey of "professional women around the world" aimed to find out what women really want from airline meals. Personally, I'll take "edible and with free wine" but clearly I am a carb-guzzling, alcoholic failed female. The 76% of furious women surveyed felt that airline food is too carbohydrate-heavy and "suited more to male consumers". I travel a lot and I can honestly say I've never felt gender-oppressed by airline food. I have endured airline food that is tasteless, bland or boring, but I haven't sat there fuming about gender discrimination because the food sucks.

This whiny 76% (and I'll make an exception for anyone with special dietary needs because I'm not a complete bitch) win today's prize for Ultimate First World Pains Complaint. Crap airline food isn't a gender issue. Airline food pisses off people equally, regardless of gender. It's not just women freaking out at carbs, it's diabetics, coeliacs, vegans, Muslims who want halal meals, Jews who want kosher meals, people with allergies, parents of fussy eaters, grown-up fussy eaters, people with tastebuds...

Sure, there may be room for improvement with the food on many airlines, but some perspective is required. If you are travelling by air for business, you are probably well-paid, have a rewarding career and your standard of living is probably pretty good. You are probably aware that plenty of airlines allow you to pre-order meals and you surely must know that even if you don't have special dietary needs, you are perfectly entitled to ask for a special meal, such as a diabetic meal, if you think it might be healthier. Hell, I'm a committed carnivore but if my bowels are quaking at the prospect of an airline chicken salmonella festival, I just ask for the vegetarian option. I assume that if you are a professional woman who travels regularly for work, then you are not a complete idiot.

The airline food experience is usually no more than three meals, depending on how long the flight is. Indeed, in this inane press release, one Nikos Loukas from inflightfeed.com explains why airline food is not Michelin star cuisine: "Airlines tend to look at passenger demographics on each route to work out what will be offered on their buy on board menus."

Exactly, Nikos. And this demographic analysis would equally apply to food served by airlines as part of the cost of the ticket too. Airlines have to feed a large number of people, they want to do it in a cost-effective manner, they need to serve food that tries to appeal to a broad range of people. Airlines are not charities, they are not airborne detox retreats, they are not able to easily offer every single passenger exactly what they want to eat.

Worldwatch Institute estimates that only 5% of the world's population has travelled on an aircraft. So if you are part of the fortunate 5%, you might want to check your privilege next time you start feeling oppressed because the airline is serving too many bread rolls.