Exactly what is Jeremy Hunt's problem? 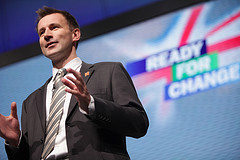 Sky News reporter, Joey Jones, looked a little hapless as he reported today from the Conservative Party conference in Birmingham. He said that a gaffe-free conference would be a good thing for the party. Except, too late, Jeremy Hunt has already happened.

After his colossally inept turn as Culture Secretary, British Prime Minister David Cameron rewarded Hunt's failure by giving him the Health Secretary position - and now he has shown his true colours on the issue of abortion, a hornet's nest that didn't need to be kicked when Britain has other things to worry about, like unemployment and a stagnant economy. To be fair to Hunt, he was put on the spot in an interview with The Times and asked for his opinion on abortion. It wasn't an official policy announcement. It was just his opinion, to which he is perfectly entitled.

This is what he said: "I voted to reduce the time to 12 weeks. I still have that view. There's an incredibly difficult question about the moment we should deem life to start." He went on to say there is a "fundamental moral issue" in wanting to halve the limit from 24 weeks to 12 and said the issue "cuts across morality." Which is true - there are left-leaning prolife people and there are prochoice conservatives - it is a polarising issue. Among my own diverse circle of friends, the full spectrum of abortion opinion is represented.

But what Hunt doesn't seem to realise is that, for the most part, his ideal 12-week limit is already happening without any change to the law. According to Department of Health statistics, 91% of all abortions in the UK happen within the first trimester. This indicates women are making timely decisions. There aren't queues of women at clinics demanding elective abortions on a whim at 24 weeks.

The abortions that happen around the 20-24-week mark are almost always the result of heartbreaking scan results. Just ask any woman who has been presented with an ultrasound showing a foetus with anencephaly how overjoyed she was upon realising this is a condition that is incompatible with life.

In any case, while Hunt made grand statements to The Times about morality, it was a remarkably un-nuanced statement of opinion. Does he mean dropping the 12-week limit to cover elective abortions only? Does he have any considered, science-based views on later terminations for medical reasons? What if the mother's life is in danger after the 12-week mark?

Furthermore, as Health Secretary, does Jeremy Hunt have any real solutions in regard to reducing unplanned pregnancies?

If he is so horrified at Britain's abortion rate, can he guarantee British women will continue to have access to free birth control as long as he is Health Secretary? Can he pledge to improve sex education, at school level, at a doctor-patient level, at abortion clinics, and, hell, even at crisis pregnancy centres (because surely they are serious about preventing future unplanned pregnancies, no?), so that women are armed with accurate information to not only make the best contraception choices for their individual circumstances but also to ensure they use birth control properly?

Across the world, low-income, poorly educated women have more unplanned pregnancies than more affluent women. Can Hunt challenge his party to find real solutions to poverty in Britain? Is Hunt committed to ensuring every child in Britain has equal access to good quality education? Improvement in both these areas would certainly help reduce unplanned pregnancies and subsequent abortions.

For women who choose to carry an unplanned pregnancy to term (for truly prochoice people support women who make this decision as much as they support women who choose to have an abortion), will Jeremy Hunt advocate for improved benefits for mothers? Improved child benefit perhaps? Is he as scandalised as I am that hospitals across the country are facing the prospect of losing maternity units despite a growing population? Is he in favour of less bureaucratic processes for women who would like to put their babies up for adoption and for prospective adoptive parents? Does he have any coherent thoughts on any of these issues?

Then there is the awful issue of sex-selective abortions, which overwhelmingly results in the abortion of female foetuses. Does Jeremy Hunt - or indeed his colleague and cheerleader, Minister for Women, Maria Miller - plan to call for cultural change in the UK, among all communities, and on a global level to ensure that every "It's a girl!" ultrasound is an occasion for joy, not shame or sorrow?

These are all big picture issues but they are all issues that need addressing by anyone serious about reducing the number of unplanned pregnancies and abortions. Addressing some of these issues may require even more U-turns in current ConDem policy. Jeremy Hunt's comments to The Times are heavy on rhetoric and light on detail. And, given most abortions in the UK already happen in the first trimester, his comments are pretty damn pointless.

(Photo courtesy of The Conservative Party)
Posted by Georgia Lewis at 07:57