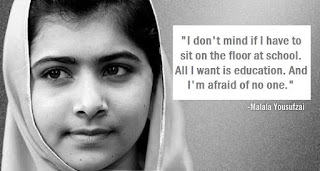 Malala Yousafzai has already achieved more than many of us ever will in a lifetime. In 14 years, she has become a globally recognised advocate for girls' education. In her home country of Pakistan, she has stood up to the Taliban, the warped, psychotic misogynists who believe that only people with a penis have a right to an education, a very narrow, theocratic education.

And now she has been shot in the head and neck by the cowardly Taliban, who have vowed to kill her if she recovers from her injuries. Fortunately, she is recovering from her injuries in Birmingham's Queen Elizabeth Hospital. Unfortunately, there are pond-scum idiots, chronic underachievers, intellectual bankrupts and tiny, little sad minds, out there who are critical of Malala being cared for in an NHS hospital. They hide behind the anonymity of the online world, devoid of courage or the ability to see past their own puny worldview.

Across assorted online forums, Malala was accused of being a health tourist, of using the British taxpayer-funded NHS for her own convenience. As if Malala deliberately got herself shot by the Taliban just so she could nab herself a free bed in Birmingham. Seriously, to compare her to people who deliberately make their way to Britain for the sole purpose of obtaining free healthcare is offensive and moronic.

And then there are the willfully ignorant purveyors of incorrect information. The Daily Mail, like every news website, stated quite clearly that the Pakistani government is footing the bill for Malala's transport and care costs. But this did not stem the relentless tide of idiocy as hundreds of kneejerking readers demanded to know why their taxes were paying for Malala's treatment.

A Special Stupidity Award goes to one Hannah of Sussex, someone who I am going to assume was able to exercise her right to an education without fear of a Taliban bullet. She wrote this under yesterday's story about Malala in the Daily Mail: "my hubby is not allowed an op on his leg for a varicose vein (he's in constant agony) because of funding. They will not carry out the op unless it ulcerates or he is is unable to walk (words directly from dgh consultant)! So, they would rather my hubby gets so bad that he would be unable to work and be on sickness benefits (we have always worked and have not claimed anything in our lives) before they will do anything?!!!"

Hannah, really? Obviously, your husband's condition is deeply unpleasant and your story does indeed expose a flaw within the NHS whereby people who cannot afford private cover may have to wait until a condition worsens significantly before they can have surgery. But Malala being in a specialist unit in Birmingham, at the expense of the Pakistani government, does not have any bearing on your husband not being able to have a varicose vein operation in Sussex.

Frankly, I don't mind if my taxes are helping Malala recover. It is the right thing to do and we are very lucky that in Britain there are great doctors on hand who will give her the best possible chance of surviving so she can continue to lead a healthy and productive life.

Other kneejerkers are up in arms because police at the hospital in Birmingham have had to prevent people claiming to be relatives of Malala from trying to visit her. The auto-pilot response to this has been along the lines of: "Well, clearly they are all members of the Taliban trying to break in and kill her! Sharia law is here in Britain!". Except that in this very special case, anyone who has not arrived with Malala from Pakistan needs to be carefully vetted because they may well be idiotic extremists. Or they may be misguided well-wishers who need to be told that the best thing for Malala right now is for her to rest and receive medical treatment, rather than turning her room into a concern troll sideshow.

Oh, and some fools are whining because our taxes are paying for the police officers protecting Malala. They are failing as human beings. I trust that if these pea-brained buffoons ever need the help of police in another country, they'll either turn it down or offer to pay for their time, right?

And straight from the "Clowns to the left of me, jokers to the right" files come howls that Malala being treated in Britain is just a US-appeasing propaganda stunt. So what if it is? If Malala can get the care she needs and Britain can send a stern message to the Taliban that this nation supports the right of girls to be educated, that's great. Yes, I know the Taliban doesn't care about any stern messages from Britain, but that doesn't mean the message shouldn't exist.

Can we please focus on the positives and be grateful and proud that we have NHS hospitals that are still capable of achieving amazing things. Instead of whining, I have provided some helpful links at the end of this blog post for anyone who wants to do something useful to try and improve the world.

Inspired and moved by Malala's story? Want to do something practical?

To send Malala a message of support: http://www.amnesty.org.uk/

To support the education of girls globally: http://www.plan-uk.org/what-we-do/campaigns/because-i-am-a-girl/