The Merton mosque and the manufactured outrage 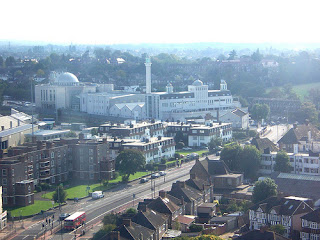 I try not to share links from the Daily Mail website because that is what they want - clicks galore to keep the advertisers happy, regardless of the nonsense the articles regularly peddle. But I am making an exception for a particularly bizarre article in Mail this week written by "leading liberal commentator" David Goodhart (although he identifies as "post-liberal" on his Twitter account). This is because it paints an absurd picture of the London borough of Merton, where I live, and the article needs serious analysis.

Just as Andrew Pierce, an openly gay man, regularly writes pieces for the Mail opposing such things as marriage equality, it would appear that Goodhart is a liberal whom the paper has decided is OK and therefore he can be used to further agendas. The pitiful "OMG, the Muslims are taking over and white people are becoming extinct!" agenda is the one Goodhart is helping push, whether he realises it or not. This becomes increasingly obvious as you read what Goodhart has to say about the Baitul Futuh mosque.

The Baitul Futuh mosque, the largest in Europe with a capacity to accommodate more than 10,000 people, is like a rage lighting rod for the average Daily Mail reader. As Goodhart tells us, the mosque "dominates the neighbourhood." Sure, it's a big building, but the edifice that truly dominates this neighbourhood is the unfeasibly ugly council building which looks like row upon row of broken, rotten teeth looming above the library. For those who are offended by the mosque, the very sight of it is blocked by repulsive council offices as you stand at the Morden tube station.

Goodhart then appeals to the Daily Mail reader's yearning for a bygone (read: whiter...) era when he tells us that mosque "replaced an Express Dairies bottling plant which provided a few hundred jobs for local people and lots of milk bottles - an icon of an earlier, more homogenised age."

In the mind of the Mail reader, this screams: "THE EVIL MUSLIMS CAME TO A NICE, BRITISH BOROUGH AND TOOK BRITISH JOBS AWAY!"

Except the dairy closed in 1992 and the mosque was inaugurated in 2003.

In an insult to anyone who suffered under apartheid in South Africa, Nazi Germany or segregated America, Goodhart says that in Merton "a polite apartheid reigns, an accommodation rather than an integration." He then goes on to tell us that "the white population has more or less reluctantly shuffled along the bench and allowed others to sit down." Honestly, he is making my innocuous middle-class neighbourhood sound like a place that requires the activism of a terrifying white equivalent of Rosa Parks.

The white rage continues as Goodhart tells us that Merton's minority population as risen from 10% in 1980 to more than 50% today and the primary schools "which were still majority white as recently as 2003 - are now 64% ethnic minority."

Except, according to the last census, this is crap. Of the 20 wards that make up Merton, all of them have white ethnic groups in the majority - ranging from 57.12% in Longthornton to 87.21% in Lower Morden. The overall average for all the wards is 75.23% of people in white ethnic groups.

There's no real explanation from Goodhart as to why a white majority (which exists even though he says it doesn't) is a good thing or how this awesome whiteness is defined. Ever the generous soul, Goodhart says that because there's no one dominant minority in Merton, this "helps to make the changes feel less threatening." Well, that's a relief then. We can't have the white people freaking out at all this multiculturalism.

And, like all good attempts to manufacture outrage, there is a paragraph to which any sane person would say: "So what?". Goodhart "reports" that at a park near the station, on a sunny day (not that we've had a sunny day for a while so God knows when he did this particular piece of stellar research...) "the place is usually full but divided along ethnic lines: large groups of Pakistani women picnicking with children, Polish guys drinking beer, young Indian men playing cricket, Africans playing basketball."

What would he prefer? If the Pakistani women and their kids had a beer with Poles before joining in a vigorous game of basketball with the Africans? Did he ask all these people how they felt about life in Merton? Is he certain all the cricket players were Indian, for cricket is very popular in Pakistan and Sri Lanka too? Hell, is he even sure all these people were born outside the UK?

Moving swiftly along, Goodhart inadvertently destroys one of the Daily Mail's favourite immigrant myths when he writes that "several of the more entrepreneurial communities, such as the Indians and Tamils and Iraqi Kurds, create jobs". So they create jobs, contribute tax revenue and aren't claiming benefits. Good to know!

But Goodhart concludes this line with the mournful "but they invariably go to members of their own community." Much like a lot of white people do, I would imagine.

Not content with passing off random observations in a park on a sunny day as fact, Goodhart plays another Daily Mail trump card - the fear of immigrant crime. He tells us that "some minorities import historic feuds." Instead of providing any real crime stats or interviewing anyone from the local police to back up this portrayal of Merton as a hotbed of racial tension, Goodhart tells us: "Orthodox Muslims in the area are suspicious of the Ahmadiyans [who worship at the Baitul Futuh mosque]; Tamil youths fight among themselves, as do Somalis; and the historic black (Caribbean and African) versus Asian antipathy is also played out on some streets."

Then Goodhart jumps off on another tangent and tells us that "economically, many minority Mertonites are doing pretty well in their enclaves." ("Enclaves  being Daily Mail-speak for "ghetto") He points out that it's the Indians and Chinese who are "doing best at school and in jobs, closely tracked by Koreans and Tamils" and, like the rest of the UK, "the white British are somewhere in the middle." I'm sorry if anyone is offended by people from ethnic minorities getting an education but this does not stop white kids from striving to do well at school. Are all white families failing to put a high value education for their kids? Surely that is a stupid stereotype on par with everything else Goodhart has spewed forth in this sad article.

Finally, Goodhart manages to quote someone, albeit anonymously, when a hairdresser tells him: "We don't like it, but we don't have much choice, do we?" of a "Muslim hair-cutter" who opened a shop two doors along. No, sweetheart, you don't have much choice - it's a free market economy. Offer your customers good service and good value and you'll probably stay in business. Would she say the same thing if a spate of Christian salons opened in Merton?

Then, after saying that the Ahmadiyans who worship at the big mosque are "model immigrants in many ways" and pointing out that they are grateful to live safely here and that they took out advertisements on London buses congratulating the Queen on her Diamond Jubilee, Goodhart goes on to quote another nameless resident. He describes him as "White Heritage Elder Male" and he was at a Merton council focus group when he said: "We've lost this place to other cultures. It's not English any more."

Is this gigantic mosque is causing the erosion of Christianity in Merton - that favourite measure of Britishness of the Mail? Probably not. Like the ethnicity question in the last census, the religion question revealed that a majority of residents in every ward identify as Christian. From a still-high low of 54.59% in Graveney to 74.36% in Lower Morden, it would appear that Merton is not on the verge of mass conversion to Islam.

Goodhart lectures us, saying that local political leaders "have no choice but to celebrate the new diversity." That'd be the diverse people who have has created jobs, opened businesses, paid taxes, not claimed nearly as much money in benefits as the Daily Mail would like us to believe and do such heinous things as have picnics, play cricket, drink a few beers and shoot hoops in the park on a sunny day.

The article then comes out with the usual argle-bargle about how we should be proud to be British. Goodhart, despite the earlier nonsense, even says that "very few British peoploe think you have to be white to be part of this." Good. Then why so much dishonest blather about white people being in a minority and losing their culture then?

Bizarrely, he concludes with the story of local Labour MP Siobhain McDonagh's father who arrived in Britain in the 1940s to work as a labourer. He married an Irish nurse, they had two daughters both did well with one becoming an MP and the other becoming General-Secretary of the Labour Party. Goodhart writes sentimentally as he tells of the father watching one of his daughters become a baroness and muttering under his breath: "Only in England... Only in England."

He says that he was "not technically correct - these things happen in other places, too - but they happen here far more than we admit and it's time our national story reflected them."

Right. So he concludes that our national story should reflect the achievements of immigrants? Or does he mean only white immigrants? It's hard to tell from such a flabby, directionless article what he is driving at with that conclusion. Is he trying to claw back some liberal credibility at the end? Is he trying to paint a completely false picture of the multicultural neighbourhood in which I love to live? Whatever the case, all this article has achieved is (at the time of writing) 571 reader comments, most of which indicate Goodhart succeeded in peddling more Daily Mail immigrant myths. Well played, sir.Well played...