A postscript to the manufactured Merton mosque outrage 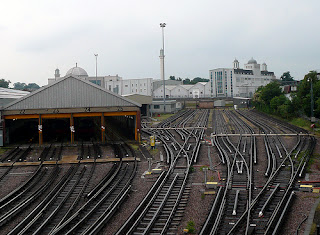 The response to my last blog post on a ridiculous Daily Mail story about the mosque in the London borough of Merton has been very heartening indeed. Multiple residents of Merton, the borough in which I have happily lived for the last two years, have told me how ridiculous they found the Mail's attempt to portray Merton as some sort of hotbed of racial tension. Nobody who communicated with me after my blog post recognised the Merton David Goodhart tried to sell us in an article cynically timed to coincide with news on immigration changes announced this week.

As well as an overwhelmingly generous response from people who attend the Baitul Futuh mosque, non-Muslims also shared with me their acceptance of the mosque and their complete rejection of the suggestions in the article that the mosque has somehow created what Goodhart appallingly called a "polite apartheid."

Goodhart wrote that the mosque - the largest in Europe so therefore an instant catalyst for ragefits by Daily Mail disciples - "replaced" a dairy that employed hundreds of local people. Except there was a seven-year gap between the dairy closing and the mosque building work commencing. Merton residents who have lived there for longer than I have told me that after the dairy closed, the abandoned site attracted drug-related crime. It was not a pleasant part of the borough and the mosque gave that end of Morden (for Morden is just one part of the borough - not that you'd know that from the article...) a new lease of life and a new and interesting community.

The worshippers of the Baitul Futuh mosque are from the Ahmadiyya Muslim Community and their slogan is "Love for all, hatred for none." The worshippers perform a wide variety of charity work in Merton. I have been visited by a mother and daughter from the mosque who were collecting for the Save The Children charity, a non-sectarian organisation. The mosque has also raised money for the Queen's Jubilee charities, they hold regular blood donation drives, hold clean-up days to remove rubbish from the streets and joined other community groups in 2005 in a campaign to save and sensitively redevelop a popular local park. This is not the work of a group that refuses to integrate with the wider community. Indeed, attempts to stir up anti-mosque feeling by the National Front in 2002 were rejected by local residents and it was peacefully inaugurated in 2003.

My blog post has been tweeted to David Goodhart and I welcome his response to my critique of his attempt at journalism. He has, at the time of writing, not responded. It could well be that the published article is the result of the original copy going through an extreme editing process, as happened to many people who have written for the Mail in good faith and not recognised the story that has been published. But even extreme editing with an obvious agenda does not excuse Goodhart describing Merton as a "polite apartheid."

It was also heartening to not get trolled by UKIP, EDL or BNP types as a result of my blog post. The closest I received to a negative response was a bizarre tweet with a link to a horrific "honour" killing that took place in a Muslim family in Mitcham. Yes, Mitcham is part of the borough of Merton and "honour" killings are completely inexcusable, but there is no evidence that the Baitul Futuh mosque supports such crimes or that the family involved even attended the mosque.

Since writing yesterday's blog post, I have met via Twitter some very friendly people from the mosque - it turns out that one of my new virtual friends uses the same butcher that I do. In a fine example of cross-cultural integration, this is the very friendly Muslim butcher who has joked with me about using wine with his meat - his lamb mince and my red wine-laden moussaka are a winning culinary combination.

Soon these Twitter friendships will move from the online world to the real world. On April 12, I have been invited to visit the mosque and I look forward to this opportunity.

Photo by Fin Fahey
Posted by Georgia Lewis at 06:06