You guessed it! It's another world of stupid! 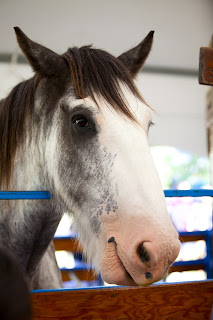 1. OK, so President Obama has signed a load of executive orders in favour of gun control and he did so surrounded by children. The US right, unsurprisingly, has called him out on this. It is gimmicky because good policy should stand up without using kids as props. Regardless of the issue, using kids for political gain has always been a tad unseemly, whether it's kissing babies, posing with photogenic offspring to appeal show off one's family values or whatever. Ugh. But then the NRA also called out Obama for having armed guards protect his own children. Yes. That is because as the children of the most powerful man in the world, Sasha and Malia are obvious targets. For people who may be getting their hands on guns a little too easily.

2. The great British horse meat debacle has resulted in a festival of equestrian puns - and a festival of absurd hysteria. There was a nationwide gross-out when it was revealed that Tesco's pre-made beef burgers contained horse meat. People who are perfectly happy to eat cows, sheep, pigs and chickens panicked and declared it was disgusting. Never mind that the addition of some nice, lean horse meat might actually improve a burger, and cheval is a damn sight better than the crap in the average hot dog - these people were not going to eat Seabiscuit! Then there were the sanctimonious vegetarians who used this as another excuse to be sanctimonious vegetarians.

The horsey beef burgers brouhaha wasn't a failure of food hygiene. It was merely a failure of food labelling. If the label tells the consumer there is horse in their burger, they can make the choice as to whether they find that appalling or if they simply decide that a horse is like a delicious, long-necked, more agile cow.

3. Stephen Marche has written a profile piece on Megan Fox for the US edition of Esquire magazine that is so embarrassingly awful, the only viable excuse for it is that he lost a bet. Marche's words were beyond parody. There was a long riff about ancient Aztec sacrifice, he slags off the physical attributes of Lena Dunham, Adele and Amy Adams in his defence of Fox, he writes without any apparent irony that her skin is "the colour the moon possesses in the thin air of northern winters."

Fox joins the irony vacuum by saying how she doesn't want to be famous anymore while posing for a magazine in her underwear.

But my favourite bit is Marche's description of Fox's lips: "The lip on the left curves exactly the same way as the lip on the right." Either Marche is confused by facial anatomy or he isn't describing the lips on her face...

4. Manti Te'o, a US college football star who plays for Notre Dame (which seems be inexplicably pronounced in the US as "Noter Dame" - I'd love an explanation of this), fabricated a story about a dead girlfriend. For months, the US sports media believed that Te'o's beloved, one Lennay Kekua, was in a serious car crash and was then diagnosed with leukaemia. The story became even more tragic when Te'o revealed that Kekua passed away on September 11, aged 22, within hours of his real-life grandmother dying. Except Kekua never existed and Deadspin.com was able to reveal that Kekua never existedand Te'o's story contained enough holes to make a tonne of Swiss cheese.

But here is a story from Notre Dame that is far more important and deserves far more airplay than the moronic Te'o.

5. Russian tennis player Maria Sharapova garnered 40,000 Twitter followers after her first tweet: "Your ultimate sugarmama has arrived. #myfirsttweet." I'm not sure what is more idiotic - the fact that such a banal tweet would be so popular or the fact that the tweet is promoting her new candy company, the awkwardly named Sugarpova. Actually, the biggest idiots are possibly the people who are now angry with her for starting a candy company when she is allegedly meant to be a role model promoting a healthy lifestyle. Or perhaps people could start taking responsibility for what they put in their mouths rather than looking to a shrieking tennis player for guidance.

6. The BBC accidentally repeated a Tweenies episode from 2001 featuring a spoof of Jimmy Savile as a puppet presenting Top of the Pops. It was a stupid blunder, someone should have checked et cetera, et cetera. But the outcry is simply today's excuse for the pearl-clutchers to get their knickers in a twist and slag off the BBC. Any kids who happened to catch the episode on Cbeebies yesterday morning wouldn't have a clue who he was and are blissfully unaware of the horrible news stories that keep erupting. Any offended parents who spotted it could simply turn the TV off and get on with their lives. Anyone whose kids were actually harmed by the puppet yesterday should call the police to have it arrested.

7. Lance Armstrong. That is all.