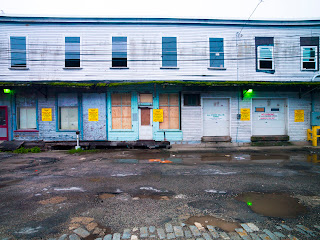 Jessops has closed its doors. The high street photographic retailer shut 187 stores and put 1,370 people out of work in a tough economic climate. Then, it was announced that HMV had gone into administration. There's another 4,500 jobs in jeopardy. And Blockbusters has gone into administration as well. That's another 4,190 people facing the fun of Workfare. Cue the inevitable outpouring of grief over more closed shops on Britain's high streets and the plight of the suddenly unemployed.

And cue a big pile of hypocrisy. Unless you diligently bought all your camera gear at Jessops, have never tried to pass off your groundbreaking Instagram work as bona fide photography, and eschew online shopping, you're not really in a great position to bemoan the demise of Jessops. We're all part of the problem. So many of us have becomes accustomed to shopping from home in our pyjamas, from smartphones and tablets, from work PCs in our lunchbreaks.

Stores like Jessops become free showrooms where people will try out all the products and then go home, jump online and scour the internet for the best deal. In the case of Jessops, their online price would seldom be as competitive as Amazon. So they are part of the problem too. Likewise, HMV struggled in an era where people seldom buy CDs anymore. And a colleague of mine wisely pointed out that Blockbuster could have survived if they invented the equivalent of Lovefilm as part of their drive to go online. After all, people are still watching films at home, just as they are still taking photos and listening to music.

As far as we can tell, all three businesses met their tax obligations but whether government tax breaks - or ensuring competitors such as Amazon paid their fair share of tax - would have saved the day for either one is uncertain.

The simple fact is that retailers who don't adapt to the drive towards online shopping are going to fall by the wayside.

Inevitably, stories from staff and suppliers to both Jessops and HMV have come out, offering insider perspectives on the human cost and reasons for the downfall that we may not have thought about. And, no doubt, ignorant customers with vouchers they can't redeem are probably being rude today to HMV staff who are facing unemployment.

Cue the moans about the death of the high street. Cue Mary Portas appearing on the news to repeat her mantra about how she hates that high streets are full of pound shops, charity shops and betting shops. Cue the opening of the No Shit, Sherlock files as she states the bleeding obvious - that these three types of shops typically attract business in recessions.

Yes, it'd be simply spiffing if every high street in Britain was a charming melange of tea shops, independent purveyors of cashmere knitwear and fair trade homewares stores. But struggling people need charity shops, they don't want to pay any more than a quid for a large bottle of bleach and, regardless of what you think about the morality of gambling, the notion of a big payout is always attractive when times are tough.

When parking on the high street is impossible, expensive or a constant game of parking ticket roulette, is it any wonder shoppers with cars prefer to drive to malls with gigantic free carparks? They're not pretty but they're convenient and they're warm. People like convenience and warmth. As long as councils continue to make it difficult for motorists to park and there is insufficient investment in public transport, this will continue to happen.

And if high streets die what happens then? How about repurposing buildings for social housing, or for schools and universities, or for medical centres? Maybe unattractive buildings of no historic significance can be knocked down and parks created in their place?

Whatever the case, few of us are keen to give up shopping online. And as such, we must deal with the inevitable consequences.