Today I shall talk about cervical cancer... 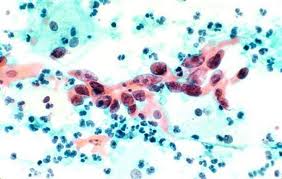 This week is Cervical Cancer Awareness Week. But for any awareness week to actually be effective, all the awareness-raising has to translate into action.

The good news is that with early detection, cervical cancer does not have to be a death sentence. But pap smears are essential for early detection and subsequent early treatment.

It is important for all sexually active women to know about pap smears, to know why they are important and to not be afraid of them. It is a few moments of slight discomfort and pants-off mortification in front of a doctor or nurse who has probably seen more vaginas than all of Motley Crue combined and, as such, will not find yours to be horrible or weird. But the discomfort and mortification could save your life. I'm not even being melodramatic - a pap smear probably did save my life.

I was very lucky. I was 21, living in Sydney, when I had an abnormal smear test. In Australia, the rule of thumb for pap smears is to start having them from the time you turn 18 or a year after you become sexually active, whatever comes first. Pap smears are generally covered by Medicare, just as they are by the NHS. But the NHS rule is that you should start having them every three years at the age of 25. This is too late for many women who have died tragically young.

My abnormal smear revealed CIN 1 cell changes - the lowest level abnormality - and it was sorted out very easily. By a gynaecologist I rather embarrassingly ran into at a party a year later when it turned out he was a friend of my landlord. To my eternal shame, I pointed to my face and asked him if he recognised me from that end. To his eternal credit, he laughed. Ahem...

For the next two years, I had a smear test every six months, and now I have one every year. Imagine if I had to wait another four years after I was 21 before my first smear test - that would have been plenty of time for the cells to develop into something far more sinister.

In Britain, Dr Chris Steele has been a leading advocate for women under 25 to receive smear tests. His Too Young To Die campaign needs more support - you can start here. And here is a link to the Facebook page for the Mercedes Curnow Foundation, which campaigns to lower the age of pap smears in the UK from 25 to 20.

But we also need to lobby the man in charge, Health Secretary, Jeremy Hunt. If you go to his webpage, whoever put it together has included a link to click on if you are not one of his constituents but you do want to contact him in his capacity as Health Secretary. Unfortunately, this will take you here, to a rather soulless online form. It only gives you the option of receiving a reply by email or post but not by telephone. How do we know Hunt will read any of the feedback that comes via this link? How do we know if anybody reads it at all? Still, if we all bombard this link with our questions about the availability of smear tests to women under 25, who knows? Maybe something will happen?

Hurrah! Medical science has advanced to the point where cervical cancer has the potential to become a thing of the past! There is now a vaccine against many forms of the Human Pappiloma Virus (HPV) but here's the thing - it has to be administered before the young woman becomes sexually active. It is too late for me but it is not too late for our daughters. The UK National HPV Immunisation Programme takes place when girls are in Year 8 of high school.

Naturally, there are people out there who panic at the thought of girls aged around 13 being given a such a shot. The moronic mentality seems to be that giving girls a vaccination that will help them when they become sexually active will cause them to automatically become sexually active. Yes. And having more fire extinguishers around will cause more fires. Anti-vaccination people generally make my piss boil. As such, I suggest everybody educate themselves here before they troll me.

More ways to take action regardless of whether you have a cervix or not...

Everyone should watch this segment from ITV's This Morning to hear Dr Dawn Harper explain more about cervical cancer and hear these real-life stories.

Making a donation to Jo's Cervical Cancer Trust is another great thing to do this week - they support women who have the disease as well as their families, and advocate for early screening and prevention.

And while you're at it, make a donation to Inspirational Friends - two women, Hannah Lawton and Jessie VanBeck, are planning to row across the Atlantic in the Talisker Whiskey Atlantic Rowing Race to raise money for Jo's Cervical Cancer Trust and Myton Hospice. This is in memory of a friend who lost her battle with cervical cancer in May last year.