Another world of stupid because there's just so much of it... 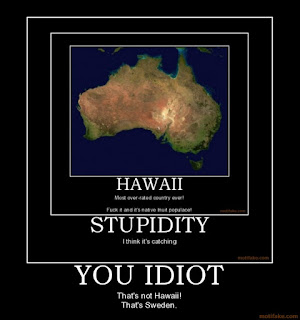 My Zero Tolerance of Idiocy policy is already taking a hammering this year. Here's a summary of the latest tidal wave of stupidity to come my way. Honestly, stemming this tide is like trying to stop a tsunami with a tampon...

1. Shadow Health Secretary Andy Burnham has wondered out loud if sugary breakfast cereals, such as Frosties, should be banned.* No, they shouldn't. This is a free market economy and there is clearly a market for Frosties. Yes, sugary cereals are gross - but the responsibility for what goes into the mouths of British kids lies with parents. How about education, awareness and parents taking the time to read the nutritional information on food packages? It is all there on the box where anyone can see it.

If reading labels on stuff you are going to feed your children is too hard for you, you're not going to win a Parent of the Year prize any time soon. Assuming the parents of Britain are that stupid and lazy, perhaps a clear, brightly coloured label should be introduced for foods high in sugar, salt and fat. To make it really clear that Sugar Puffs contain sugar. Frankly, there should be a stigma associated with feeding your kids nothing but Sugar Puffs for breakfast, when healthy cereals are just as affordable. But if you're an adult, you have every right to eat whatever the hell cereal you like.

And there's nothing to stop you putting sugar on your kids' All-Bran when you get home. Or perhaps we just need to ban sugar as well. And The Great British Bake-Off...

2. Ann Coulter, queen of non-sequiturs and false equivalencies, says that if the names and addresses of gun owners are made public, as suggested by some Democrats, then it is only fair that the names and addresses of women who've had abortions should be made public too. There's idiocy all round here. Publicly naming gun owners could backfire, if you'll pardon the pun - burglars may target houses of people they know to be unarmed, or if an intruder wants to target the house of someone they know to be armed, they'll probably just rock up with a gun of their own. Guns should be registered**, but it isn't terribly productive to have the list easily available via, say, a Google search.

Equally, the details of women who have had abortions should not be available for all the world to see because, just like records for any other medical procedure, it's nobody's damn business.

3. Prince Charles has stuck his head over the parapet and said he is concerned for the future of the planet, especially as he has a grandchild on the way. That's great, Chuck. How about you start by telling your mother she probably doesn't need to drive a Range Rover. And you could always set an example by flying economy class when you travel internationally and insisting your family does likewise.

4. And while we're on the topic of royal ridiculousness, Prince Charles is apparently*** also concerned that the consequences of allowing a firstborn daughter of the Duke and Duchess of Cambridge to ascend to the throne or allowing heirs to the throne to marry Roman Catholics haven't been properly thought through. Good grief. The fact that this is still being discussed in 2013 is beyond absurd. Republic, anyone?

5. And while we're on the topic of non-news invented by the Daily Mail, that excuse for a newspaper is still trying to create a controversy where none exists over Jack Whitehall's jokes on The Big Fat Quiz of the Year. Not content with reprinting the allegedly offensive gags and trying to imply that Gabby Logan and Richard Ayoade were uncomfortable with it all, the Mail published a bizarre article about the price of houses in the Whitehall family, ex-girlfriends of Jack Whitehall's father and other such stalker-like material. Did Jack Whitehall spurn the advances of someone in the Dacre family?

6. And speaking of pearl-clutchers, there has been a predictably hysterical reaction to an excellent article about paedophilia in the Guardian by Jon Henley. The charge of poor reading comprehension was led by ex-MP Louise Mensch who started a Twitter storm over it all. Except the article doesn't actually condone paedophilia or say it's acceptable. Henley has instead offered a balanced, even-handed account of how there is still much disagreement among experts on paedophilia, its definition and its consequences - and why understanding paedophilia is important when finding ways to protect children. Read it here and judge for yourself.

7. I've received a press release for wedding chests. Wedding chests that cost £2,600, to be precise. The press release, spruiking on behalf of Tom Aylwyn, claims this is a modern take on the wedding chests of old. Except it's not. It's still a box in which to put housewifely stuff. This seems a bit insane if you've already moved in together. And even if you haven't shacked up, surely you'd rather spend £2,600 on useful stuff for the house rather than a goddamn box.

Here is one of the chests. You can't even sit on it without getting a weird pattern on your bum... 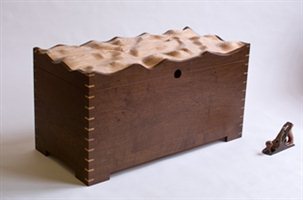 * Despite this idiocy, I'd prefer Andy Burnham to be Health Secretary instead of Jeremy Hunt. Yes, Jeremy Hunt really is that unsuitable for the job. Or for Parliament.

** Yes, I know criminals will always get their hands on guns, but that is not actually a reason to give up on registration.

*** This is according to "friends" of Prince Charles who told the Daily Mail. So it could be a total load of bollocks. But my point still stands that such discussions should have ended some time in the 16th Century.