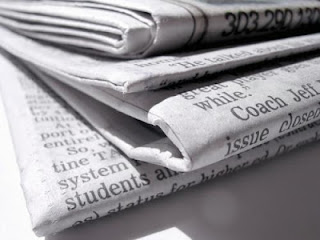 It's strange to be writing about the Leveson report from Qatar, a country that currently sits at a dismal 114 on the World Press Freedom Index, two rankings down from the United Arab Emirates, where I worked as a journalist for five years. The UK is currently ranked at a could-do-better 28. But at least I have the freedom to criticise the report, and the responses to the report without fear of ending up in a British prison. This is a stark contrast to Qatar where this week a poet has been sentenced to life imprisonment for criticising the Emir-led government.

I don't think Britain is on a track that will end up with similarly outrageous prison terms for things that should never be a crime anywhere in the world. And the Leveson report does not represent a move towards full government control of the media - but legislative change has been recommended to give an independent panel legal footing.

The report itself makes for some bizarre, and often wishy-washy, reading (he went way too easy on Jeremy Hunt for example. Cameron should be thrilled about that...). Despite ongoing controversies about people being arrested over stupid tweets and Facebook posts and David Cameron calling for a social media clampdown in the wake of last year's riots, the report only devotes a page to the internet. It is as if it was all too much for Lord Leveson to think too hard about the implications of this newfangled internet on a free press and freedom of speech. Indeed, he seems to be harking back to the original definition of a free press, which was literally the freedom to use printing presses. How quaint.

But what about phone hacking? Phone hacking is indeed an invasion of privacy and the Dowlers should never have gone through what they did when their daughter was missing. Equally, hacking celebrity phones for gossip about private lives is completely out of line. And phone hacking is illegal. If someone hacks a phone, there are already criminal sanctions available in courts of law to punish the perpetrators.

The Leveson inquiry testimonies exposed phone hacking as a practice that was largely used to collate celebrity gossip stories, the kind of stuff that is simply not in the public interest and serves the greater good in no way at all. But what if a phone hack revealed government corruption or exposed a terrorism plot? Should a public interest test be applied if such cases went to court?

All the celeb goss crap does is generate website clicks and copy sales. Should Hugh Grant's sex life be in the public interest, for example? No. He is an actor, he is a man with a penis, he is not a saint and he has never spoken out about the evils of fornication. What he gets up to in his personal life these days is his business. He did indeed break the law with the Divine Brown incident in LA, but that was a story that had an element of public interest and it was not obtained through hacking.

Tabloid journalism can be incredibly awful but in a free society with a free press and free market capitalism, they are businesses that are entitled to operate. It is also important to remember that even if a media outlet was run as a non-profit organisation, it still needs cover costs, such as ensuring staff are paid. While it is generally cheaper to run a website than a print or broadcast operation, it's a rare media outlet that can be successful, not pay anyone and not have to generate any revenue. As consumers of media, we have a responsibility to be educated consumers, to be aware that such media businesses may be beholden to advertisers and to read and watch smartly. Similarly, political bias is generally pretty obvious in newspapers, whether it is from the left or the right.

As consumers of media, we have the power to choose where we spend money on media. If you don't like the Daily Mail, don't buy it and don't give its website hits. And you have the right to do the same if you don't like the Guardian. There are plenty of good things being written by good journalists but they are not always commercially successful. Seek them out, spread the word, don't just rely on one newspaper or one news channel for all your information. You have choices. And you have the freedom to call out bad journalism through all manner of mediums - social media, letters to the editor, online comments, talkback radios, hell, start your own blog if you feel that strongly about it...

Then there is the issue of libel and defamation. In theory, you have the right to sue if you have been libelled or defamed by a media outlet. But the cost of litigation means that this has become a privilege for the wealthy. And this is where David Cameron's criticism of Leveson is hypocritical. Is he about to announce reforms whereby ordinary citizens could access legal aid if they wanted to pursue libel or defamation lawsuits but cannot afford to legal fees? Of course not. Is it in Cameron's interests to urge a private citizen who has been libelled or defamed in the Daily Mail? The constant and unbalanced exposure of "benefits scroungers" springs to mind, but would David Cameron make it easier for people on benefits to sue newspapers? Of course not.

And Cameron knows he cannot afford to lose the support of newspapers that have spoken out against the Leveson recommendations. But perhaps this is a time for newspapers to re-examine their support of politicians and parties. As an Australian, I have always been baffled about the way British papers will come out in public support of one political party or another at every election. How is that the role of a newspaper? Where is the balance or the independence?

As I write this from Qatar and reflect on the often frustrating realities my colleagues and I encountered while working in the UAE, 112 on the Press Freedom Index, I am very grateful that I can criticise without fear of getting arrested when I land back in London tomorrow night. I fully expect that I will not lose that right in post-Leveson Britain.

I had a very different experience in the years 2006 to 2011. Now that I no longer live and work in the UAE, I can now freely say that Hassan Fattah, the Editor-in-Chief at The National, where I worked in Abu Dhabi, told me to "tone down" an opinion piece about whether the seven sheikhs of the emirates had the will to cooperate to improve the nation's transport. And I can tell you about a story of mine that was spiked by Fattah. I worked on it in my own time and I planned to expose a man wanted by the Cypriot courts who was (and, as far as I know, still is...) hiding from the law in Dubai - but Fattah told me the story was "legally fraught." It is the kind of story that I would have no problem convincing an editor to run in Britain.

Instead, we used to get excited about pathetic victories, such as the time the section of the newspaper on which I worked got away with running a picture of a trophy featuring a naked man. It is probably the only time The National has ever run a picture of a penis. "Getting away with it" was something we'd do to feel like we had a small win over the system and for our own amusement.

I expect that Britain will not end up with a highly restricted and regulated media like that of the UAE or Qatar - and I expect that current laws regarding illegal activities of journalists be upheld so that the whole profession is not brought into disrepute. And I include tabloid journalists in the profession because not all tabloid journalists are hacking phones and tabloids have as much of a right to exist in a free society as the Guardian. Deal with it.

Image courtesy of www.kozzi.com
Posted by Georgia Lewis at 04:22