Women bishops - or, as I like to call them, bishops... 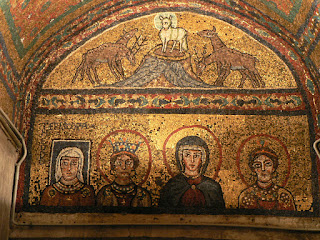 A mosaic in Rome's St Praxedis church features the image of a woman. Beside her, it says "Theodora Episcopa" - this is a depiction of a woman who was also a bishop. The mosaic is from the ninth century. The ninth century. Yet in the 21st century, the General Synod of the Church of England has failed to allow woman who have already been ordained as priests to become bishops. The clergy voted overwhelmingly in favour but no majority was achieved among the laity  - there was more than 50% support but not the 138 out of 206 votes required for it to pass.

So it would appear the progress of the entire church is being held to ransom by a vocal, conservative minority. There was even a clause to allow parishes opposed to women bishops to be ministered to by a substitute male bishop if they really felt that owning a vagina was incompatible with episcopal leadership. Imagine a private company trying to impose such rules: "I'm sorry, Ms Jones, but while you are indeed a competent and fully trained accountant, the fact that you're a woman precludes you from being a partner in this firm. If, however, we do allow women to become partners sometime in the dim and distant future, we will give our clients the option of not dealing with you if they are opposed to women as partners in accountancy firms."

This has caused much outrage and the outrage is not restricted to observant Anglicans but it crosses over to people of other faiths and of no faith. And rightly so - the Anglican church is still the state religion of Britain and, as such, people should be allowed to question this and the actions of the church, regardless of their beliefs.

There is an openly atheist Deputy Prime Minister, an atheist Leader of the Opposition with Jewish heritage, and a Prime Minister who professes to be a Christian but seems to have bypassed the compassion bit, yet still a state religion remains. There is no compulsion to be Anglican or attend church, other religions are welcome here and anyone is free to be an atheist, yet still a state religion remains.

And with yesterday's vote against women bishops, it is now a state religion that breaks the anti-discrimination laws of the very country it purports to represent. Even the royal family, also compulsorily Anglican, has made a few strides towards progressiveness by allowing firstborn daughters to inherit the throne.

All this vote does is further alienate the church from the mainstream and makes calls for a proper separation of church and state in Britain more relevant. This, in turn, could lead to further examination of the role of religion in the royal family and whether it is right for the head of state to only ever represent a shrinking demographic in an increasingly diverse country.

It is a discussion that the whole country needs to be involved in and, given that the outrage over this bishop decision is widespread and crosses faith, political and gender boundaries, could this usher in a new era of political engagement in Britain? After the farce of the low turnout in the PCC elections and a culture whereby more people are more interested in voting for X Factor winners than parliamentary representatives, if this particular outrage gets people interested in matters more important than TV talent shows, that would actually be a good thing.*

* This e-petition is a good place to start your stepped-up political engagement in the wake of the General Synod's decision yesterday: https://submissions.epetitions.direct.gov.uk/petitions/42117