Why I'm still a feminist: Part 2 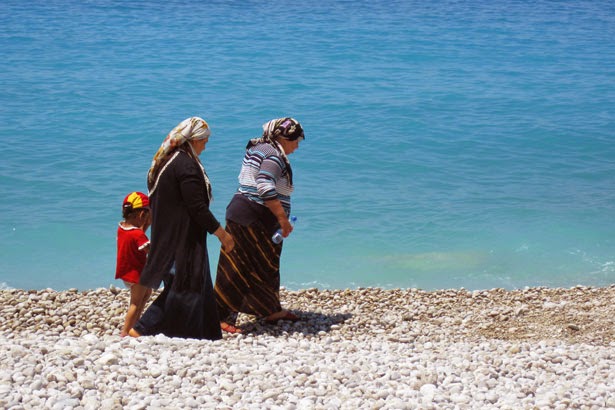 "My feminism is better than your feminism" reflected on how women harm each other by turning feminism into a competition. Sometimes some of us will have to agree to disagree on certain issues. This does not mean healthy discussion should be shut down. It does mean that more will be achieved when there is mutual respect.

January 2013 was also about pap smears and cervical cancer - this is an issue very close to my heart, among other parts, as early detection of pre-cancerous cells back in 1997 probably saved my life. This is where Australia is leading the way - pap smears are advised 18 months after you first have sex or once you turn 18, whatever comes first. But the UK lags behind with early detection and, as a result, women under 25 are dying unnecessarily. More still needs to be done here, I am sorry to report.

I joined in the feminist fun of writing the terrible Nadine Dorries a letter from my uterus. I am quite sure she never read it but the good news is that she seems to have piped down, at least on the issue of reproductive rights. She has, however, made a fool of herself in many other ways since then.

Welfare reform and sexism intersected with my piece on the "woman with a womb like a clown car", representing as she does a tiny minority of benefits claimants. It remains to be seen with the General Election looming in May as to whether whatever damn government we end up with examines the benefits system with the right mix of commonsense and compassion.

And I probably alienated myself from some women with my dismissing of Seth McFarlane's "I saw your boobs!" song at the 2013 Oscars as a fauxrage. There is now at least one fauxrage a week as people become more and more determined to find things by which they can be offended and have less and less consideration for what true freedom of speech really means.

Additonally, I mocked Cosmopolitan magazine because its sex tips remain stupid. It is trying very hard at the moment to be the "acceptable" face of feminism. Sometimes it makes good points, sometimes I roll my eyes hard.

There were plenty of stupid things said about rape in 2012 and this has not really changed. As such, we had the unedifying spectacle of Ashley Judd being shot down in flames for daring to discuss rape. This led to idiots quoting her out of context and any intelligent discussion on rape fell by the wayside. I attempted commonsense on the thorny issue of false rape accusations but I am not sure anyone noticed.

April was a weird old month in the feminist rant department. I wasn't exactly tackling the big issues with a piece on marketing chocolate Special K to women (although I remain so tired of food being referred to as "naughty" or "wicked"...) and another piece on why shoe shopping sucks. But then Margaret Thatcher died and while the people who commented on my reflections on Thatcher as a feminist icon, I am quite sure many disagree with me wholeheartedly. Her legacy remains a topic of debate and I expect this to continue for decades.

And then there was another piece on lads' mags and Page 3 which resulted in some interesting comments indeed. I encountered a tiresome woman who used her "I'm a mother, you're not!" reasoning to try and shut down debate on censorship of lads' mags. That is a surefire way to quell any hope of intelligent discussion and it happens all the time. Nuts magazine announced more modest covers, possibly in the wake of the Lose The Lads' Mags campaign but I doubt campaigners will rest until these magazines are eliminated.

A century after Emily Davidson's untimely death elevated her to suffragette martyr status, I shared a few thoughts on things that would probably appall her in 2013. And looking over the points I made, not much has improved for women's voices in Parliamant. There is still tedious Daily Mail slut-shaming, and G4S still getting government contracts despite being inept and unscrupulous.

Nigella Lawson's personal life hit the headlines in 2013 after awful pictures of her now ex-husband throttling her at a London restaurant were published. She seems to have happily moved on. If only the same could be said for everyone who has suffered at the hands of an abusive partner. Domestic violence remains a problem.

I took a look at Australia, my country of birth after Julia Gillard stopped being the Prime Minister. I maintain that a lot of the vitriol directed at her was sexism pure and simple.

2013 also marked the year I could have been released from a UAE prison had I not acted my way out of a farcical adultery trial. It was a shocking and sad story but I do mot regret living in the UAE nor do I think it's the worst place on the planet for women. Indeed, a later rant on the niqab showed that my time in the Middle East led me to views on Islamic dress that may not be popular in certain circles. When it comes to how much flesh a woman should show, she simply cannot win.

Despite being a long-term Cosmo and Grazia magazine snarker, I defended writing about beauty because, basically, lipstick is not the enemy. Hell, some days I wear it myself. More seriously, there was a censorship row at Sydney University over a magazine cover featuring a range of vulvas. It would appear this is just one of many incidents in universities around the world where free speech is being stifled. This has become an alarming trend in recent years and it has to stop. Universities will no longer be bastions of free speech and thought if the rot is not stopped.

Sex workers' rights is always a tricky one. But I don't think anyone can deny that the current laws help anyone, especially women, whether they are brilliantly unrepentant sex workers by choice or whether they are true victims. In any case, a moral panic over women selling sex is never helpful.

And as the sun set on 2013's blogging, I reflected on the role of first ladies. Again, they can't win. It doesn't matter what political stripe they belong to, or what causes they choose to champion, they will be slagged off by someone. It is an awful job and I do wonder how much relief is felt by first ladies when their husbands are no longer in office. Whatever the case, it'd be good to see more bright women leading countries - not that this will be the outcome of the 2013 British General Election...