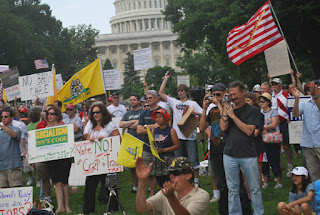 See that photo above? I am pretty sure I have very little in common politically with the people in the photo but I support their right to peacefully protest in Washington DC. In a free society, they have every right to express their views without inflicting violence on others or having violence inflicted upon them.

But it has become abundantly clear that the right to peaceful protest is misunderstood.

The protest at the Conservative party conference was, objectively, by any reasonable person's measure, a peaceful one. It was estimated that at least 60,000 people marched in Manchester - with four arrests made, that means that, at worst, 0.00666666666% of all the people who protested were arrested. But the tiny and unconstructive minority ensured that anything but the nation-changing issues raised by the protestors got airplay in the next day's papers.

The newspapers have the right to run whatever the hell they want on their front pages. That is how a free press works. But sadly, a few buffoons gave the press a leave pass to run stories that were not related to any of the motivations behind the protest?

Journalists were spat it, which is obviously completely revolting. I understand the frustrations with the media that might lead to spitting but that does not make spitting on someone trying to do their job in any way acceptable. Pitifully though, when I tweeted that I "understand the frustrations", I was jumped on by a Tory apologist hate mob who accused me of condoning spitting. Which I did not do. Never mind that I am the person who dry-retches if I overhear someone spitting across the other side of the road. Apparently, understanding why people are frustrated with the media made me the patron saint of expectoration.

Someone threw an egg at a young Conservative who was trying to get a rise out of the crowd by brandishing a photo of Margaret Thatcher, even though he was probably still in nappies - or possibly not yet conceived - when Thatcher was ousted in 1990. The "egg-throwing yobs" became front page news rather than the issues that are a legacy of Thatcher's Britain.

And some people used their freedom of speech to yell "Tory scum!" at Boris Johnson as he entered the Conservative Party Conference. He punned his way into the headlines by claiming he was warmly welcomed with cries of "Tories, come!". Oh, the hilarity. And, thus, the fact that Boris Johnson only had the cojones to criticise the impact of his party's welfare cuts on Londoners after he voted for the bill that includes the welfare cuts, went unnoticed.

Then there was the sickening, dreadful report of street sexual harassment and a rape threat made to a woman attending the Conservative Party conference. This story was broken with minimal detail by Guido Fawkes. It is not known whether the accused was affiliated to any groups at the protest or whether he was just some random dickhead who decided to join in and allegedly behave like a sexist douchebag. I can only say "allegedly" because it is unclear if the incident was reported to the police. After all, police officers were not in short supply at the protest. Or was the woman concerned happy to just let Guido Fawkes use the story to further his political agenda and equally as happy to let a man who thinks sexual harassment and rape threats are OK to walk freely around Manchester?

And look at that, I've just spent four paragraphs of this blog post doing exactly what the establishment wants. I've talked about the minute minority rather than the real concerns of the 59,994 or more people who managed to march on the Conservative Party conference last Sunday without being arrested.

And just this weekend in Ankara, the Turkish capital, more than 100 people were killed in a bomb blast at a peace rally. Many are holding the government responsible, either directly or indirectly, and, at the time of writing, nobody has claimed responsibility.

Anybody, regardless of their politics, should be horrified at this infringement on the right to peaceful protest in Turkey. But, if you are also part of the brigade that judged the entire march on the Conservative party on the actions of a few, if you seriously think Boris Johnson's beloved water cannon should be used for events like this, I have to ask you: Why do you hate freedom of speech, freedom of assembly and democracy so much?

Democracy does not begin and end at the ballot box. It is a continuous process that includes the right to protest. It is not about people who didn't vote Conservative being "sore losers" unless your political thinking has not evolved past that of a six-year-old. Peaceful protest is one way to challenge the government, hold them to account, and suggest alternatives.

It does not matter if the protest comes from the left, the right or the middle. The right to do so peacefully must be upheld if we are serious about living in a democracy. Whether it is the 250,000 who marched against TTIP in Berlin this week or a handful of Britain First types brandishing inarticulate signs and yelling inarticulate slogans about immigration, it is a right we should all cherish.


Photography by Peter Griffin
Posted by Georgia Lewis at 10:54