Cut the crap on Chinese and Saudi human rights! 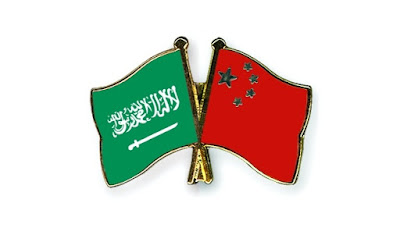 Come on, David Cameron. Come on. If you're going to kowtow to China and Saudi Arabia, at least have the honesty to admit that it has sod-all to do with human rights and everything to do with money.

This really has been the week of unedifying spectacles in Britain. The state dinner to honour Xi Jinping served bottles of wine worth £1,450 each - that's one month's rent on a one-bedroom flat in Clapham or a figure not too far above the drop in annual household income that will be experienced by an estimated 20% of British households if the House of Lords can't fend off the planned changes to tax credits. There was the Duchess of Cambridge looking demurely bored, resplendent and obsequious in the red of the Chinese flag. The blokes looked either dapper or awkward in white tie. It was all rather obscene.

Then there was the press conference that wasn't really a press conference. Not if Britain is trying to be a democracy with a free press anyway. Cameron kicked things off by announcing there would only be two questions. Two! One from a British journalist and one from a Chinese journalist. Sorry, Dave, that does not a press conference maketh. But I'm sure you know that. But God forbid we do anything to offend Xi with anything resembling a media holding governments to account. That's not how they do things in China.

And it sure as hell shouldn't be the way things are done here.

Laura Kuenssberg, the BBC political editor, crammed a lot into her one question (she had no choice, really...), calling out the Cameron and Xi on the steel industry job losses, the lavishness of the state visit and China's human rights in one fell swoop. And both men gave glib politician's answers that promised nothing and said nothing worthwhile or courageous.

Xi can slyly grin his way through a monologue about human rights being important to China and how changes are happening all he likes because he knows he will not get voted out of office any time soon, nobody will hold him to account to make any changes and he leaves the UK safe in the knowledge the moneymaking deals are safe.

Britain and China have been trading for a while now. Historically, we've done business with China since the Ming Dynasty and more recently, we've lapped up the deals as China became open to making money (largely for state-owned companies and with very little of the new wealth trickling down to the cheap labour force...). China is now a massive market for luxury goods and has the world's highest number of women billionaires at 49. Way to go, Red China!

But despite all these yummy deals, human rights have not improved in China. Exact statistics are almost impossible to obtain but it is estimated that China alone executes more people than the rest of the world combined - at least 607 executions took place in China last year and 778 in 2013. There is no free press and journalists are arrested with alarming frequency - just last month, Wang Xiaolu was arrested for "spreading false information" when he reported on the stock market crash. The one-child policy leads to forced abortions and forced insertion of IUDs. Freedom of religion is restricted. Chinese democracy is nothing but a fairly terrible Guns N' Roses album.

Limiting a press conference to two questions, both from government media outlets, is just the sort of thing one would expect from China. And yet that happened here in Britain this week.

Let us not pretend that China is anywhere near being a freedom-loving democracy. But, more than that, let us quit pretending that doing business with them will stop the human rights abuses any time soon. By "us", in particular, I mean you, David Cameron.

And the same goes for Saudi Arabia. It is probably the worst place on the planet to be a woman. And it is pretty damn horrific if you're an atheist, a Christian, a Hindu, gay, bisexual, transgender, unmarried and sexually active, a republican, a Wiccan, or you are at all interested in a free press, freedom of assembly or universal suffrage.

This didn't stop Cameron giving the same apologist answers for human rights abuses in China when he was asked by Channel 4's Jon Snow about his part in the ridiculous election of Saudi Arabia to the UN Human Rights Council. As well as stammering around the issue of whether he'd personally intervene to try and save the life of Ali Mohammed al-Nimr, the teenager sentenced to be beheaded and crucified for encouraging pro-democracy protests, he again peddled the lie that all these trade deals we do with Saudi help improve human rights.

Nothing much is improving in Saudi Arabia when it comes to human rights. Saudi has executed at least 175 people in the past year, including 102 in the first six months of 2015 alone. Nearly half of these people were foreign nationals and the mentally disabled and those accused of crimes committed while under the age of 18 are not safe from the sword or firing squad either.

It took the lobbying by Jeremy Corbyn and the ensuing mass outrage at the sentencing of British expat, Karl Andree, to 350 lashes for being caught with home-made wine in his car for David Cameron to do anything constructive. He cancelled a training contract with Saudi prisons worth £6 million to the UK and now, it seems, Karl Andree may be spared the lashes.

Obviously, this is great news for the Andree family and anyone who is appalled at such a violent punishment for a victimless crime but it was also a case of affordable principles.

In the big scheme of things, a £6 million pound contract to train staff who work in one of the world's most repugnant justice systems is small potatoes.

David Cameron was never going to risk the lucrative arms trade with Saudi Arabia to spare a British citizen from being lashed. The UK-Saudi arms relationship goes back a long way. Between 1992 and 1994, 75% of the UK's total arms sales were to Saudi Arabia. In 2013, Saudi was the world's biggest buyer of British arms, spending £1.6b. Since March this year, the government granted 37 export licences for military goods to Saudi Arabia. We will never know how many of these weapons will end up in the hands of IS but it would be naive to suggest that does not happen.

If David Cameron just admitted that the deals with China and Saudi Arabia were all about the money and really won't have any impact on improving human rights in either country, at least I'd appreciate his honesty. Right now, there's nothing honest about pretending these trade deals will help the people of either country and everything about a supposed democracy where a two-question press conference is allowed by the Prime Minister stinks.