Because I could have been released from prison today... 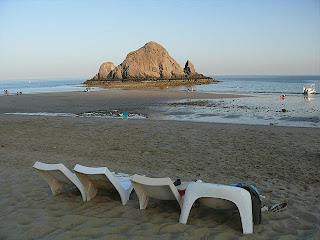 I am writing this from my dining room table in my house in London. The sun is trying to shine, I can see fat pigeons pecking away at the lawn, the cricket is on the telly in the next room and my husband is chatting with my parents, who are visiting from Australia.

But if, on this day, six years ago, things didn't go so well for me, I could have been spending today being released from a jail in the pretty but sleepy UAE emirate of Fujairah.

On August 4, 2007, my boyfriend, a lovely British man called Stuart, died in a swimming accident. A happy weekend away for a group of 10 friends turned into a tragedy culminating in nine of us at the police station in absolute shock while the police checked all our passports. For some reason, Stuart's passport was in my handbag and I handed it over along with mine. And then the officer refused to hand it back. I threw a tantrum and told him it was not his to keep as it was the property of the Australian government. I became increasingly angry and hysterical and then I was handed a document to sign, all in Arabic.

If I had a bit more presence of mind, I would have demanded a translation. As it was, I just wanted to get out of there so I signed it, asked if I could now get my passport back, and they laughed at me. It turned out I'd signed a document agreeing to stand trial for adultery but nobody bothered to tell me this. Any sex that takes places outside of wedlock in the UAE is considered to be adulterous.

Not realising what I'd signed, I was summoned back to Fujairah on August 9 for what I thought would be some routine, if tedious, paperwork to get my passport back. Instead, I ended up at the court-house, ushered past a man in a cell, to the judge's office. He was an enormous man who sat behind a giant desk with an interpreter to help him out. I was sat on a plastic chair in the middle of the room, interrogation-style. The sun was in my eyes and there were photographs of Stuart's body and autopsy diagrams all over the desk.

For about half an hour, I was quizzed about the circumstances of Stuart's death and we all agreed it was a tragic accident, a 38-year-old man gone before his time. And then came the questions about how we met, whether we were having sex or living in sin, whether I was a Christian, whether I drank alcohol or not and whether I believed in heaven and hell. I was even asked if I believed Stuart had gone to heaven after he died.

After two excruciating hours, I'd managed to convince the judge I was a 31-year-old, God-fearing virgin teetotaller and I was finally free to go. Some latent acting skills, the ability to think on my feet, and a pretty good knowledge of UAE laws about sex and alcohol saved me. Given I didn't see a single computer anywhere in the court-house, I was pretty confident the authorities wouldn't have had the technology to do DNA tests on hotel bedlinen.

Honestly, if Stuart, an avowed atheist, could have seen the farcical proceedings, he would have shaken his head and laughed. That blackly comical thought may have kept me from completely breaking down in front of a judge who clearly thought I was a slut.

I knew I was breaking the law by having sex out of wedlock, as thousands of expats do every day in the UAE. But as long as you keep it discreet and don't do it on a beach or get pregnant, the police are wise enough to turn a blind eye. For the unmarried and pregnant , the choices are basically a shotgun wedding, to leave the UAE permanently, an abortion in a country where it is legal, or to procure an illegal, possibly fatal, backstreet abortion in the UAE.

If I was found guilty of adultery, I could have faced a maximum sentence of six years in prison. Six years. All because the authorities were more concerned with my personal life than properly investigating the circumstances of a terrible accident.

Of course, the six-year scenario is possibly a little melodramatic. If I was sent down for the full six years (or for any period of time), I would have contacted every media friend I have in Australia and Britain, an international media outcry with plenty of bad PR for the UAE would have been likely and I probably would have either received a Ramadan pardon or a shorter sentence and a swift deportation.

I ended up staying in the UAE for another four years. In 2009, I met my husband in Abu Dhabi and we left together for London in 2011. Despite the horrific circumstances of August 2007, I had a great group of friends from all over the world, I knew wonderful Emiratis who were stunned at what happened to me after Stuart died, I still felt I had more career options left to explore there, I was enjoying the travel opportunities that are expensive and impossible from Australia, and I wanted to leave the UAE on my own terms.

My time in the UAE was the very best and very worst times of my life and I do not regret living and working there for five years. As I reflect on how today could have been the day I was let out of a Fujairah prison, I appreciate the freedoms I have here in Britain. Despite idiotic censorship campaigns currently happening here, it is still a great place for freedom of expression and a free press. And my experience in Fujairah gave me first-hand experience about the importance of due process and a fair and open justice system.

People who are still whining that it took so long to deport Abu Qatada, for example, are missing the bigger picture - due process is important, no matter who you are. Just as it was important for Britain to follow due process with Abu Qatada, British (and Australian) citizens can be victims of a lack of due process elsewhere. Due process is boring but it is an essential part of any fair and civilised society.

Six years on from being tried as a whore, I am truly grateful that today, I am not emerging from a Fujairah prison. After writing this without fear of the Met knocking on my door to arrest me for writing mischievous things, I will be able to enjoy a pub lunch today, I will be able to drink a glass of wine in full view of the street, I will be among friends, I will raise a glass to freedom and to Stuart.

Photo by Imre Solt
Posted by Georgia Lewis at 03:50