Fannying about in Sydney 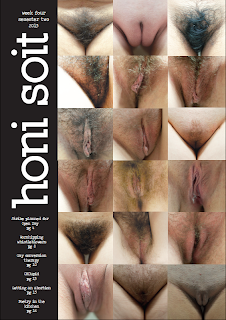 While Honi Soit is pretty hard to come by outside of Sydney University, the Student Representative Council feared that such a cover may break Australian media laws. They would be the same media laws that led to the now-defunct Australian edition of FHM requiring a very busy band of re-touch artists to ensure that errant pubes or vulva outlines were eradicated from covers and inside pages back when I worked there. I recall seeing an advance copy of a mag and marvelling at a model's crotch - her white bikini was indecently damp and the result was a smoothed-out PhotoShop vulva. It looked like she was wearing a crash helmet down there.

Fear turned to farce for Honi Soit when black bars were placed over the visible labia and clitoris. Except the bars weren't entirely opaque and the SRC absurdly called for all copies to be removed from the stands, returned to the Honi Soit office and locked up.

Good grief. Student newspapers exist to challenge the status quo, to take risks, to give voice to opinions that will often be sadly silenced when students graduate and find themselves in the self-censoring corporate world. Honi Soit editor, Hannah Ryan, was not afraid of breaking the law but the SRC panicked. Inevitably, the uncensored cover has been shared far and wide thanks to the internet making a joke of Australian media laws. It is probably the most widely viewed Honi Soit cover in the newspaper's long history.

According to the Sydney Morning Herald, the university's vice-chancellor Dr Michael Spence "defended the paper's editorial freedom but criticised the cover."

He said: "Personally my view is the cover is demeaning to women but I do realise I'm not the target audience for Honi Soit. However, the student body at the University of Sydney has a long and proud tradition of independence and it's a tradition we will continue to uphold."

Er, so he didn't really defend any freedoms at all then. The 18 women involved in the cover all posed willingly and it was created with the support of the university's Women's Collective. It was shot in the university's Women's Room. These women are not ashamed and nor should they be. But thank you, Dr Spence, for telling us these women have demeaned themselves and all women. Where would we all be without this man to tell us what to think?

On the upside, thanks to the power of the internet, a selection of real women's vulvas have been shared globally. If this means that even one young man or teenage boy learns that not every woman has a denuded symmetrical crotch that looks like a plastic taco shell, that is a good thing.  No, I am not a mother. Yes, I would happily let any future teenage son of mine see the Honi Soit cover. What are you going to do, Moral Panic Merchants? Call Social Services in advance lest I end up being a bad mother sometime in about 2030?

Fear of pubes is nothing new, despite what anti-porn campaigners might think. We have a worldwide archive of centuries of art where pubic hair has been diligently eliminated and the pudenda is always neat and tucked away.

A sense of shame, fear and revulsion surrounding real female bodies is nothing new. This, in turn, breeds some awful attitudes towards women's bodies by men and distressingly negative attitudes in women about themselves. The ongoing existence of ridiculous media laws and the resulting panic, such as that exhibited by the SRC, demonstrates exactly why we need to see more images that challenge our collective fear and prudery, not less.

Click here to read the blog post from Lily Patchett, one of the 18 women who featured on the cover.

Image courtesy of Honi Soit
Posted by Georgia Lewis at 07:18