Waking up to Brexit Britain... 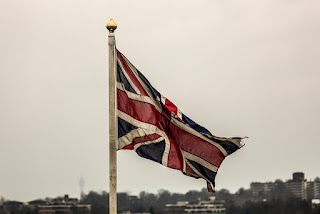 It was like that awkward moment when you wake up and realise you've shagged the office creep. You remember him at the party, saying things you wanted to hear, and you believed them, whether they were true or not. And then the alarm goes off on a new day, you look across the bed and there he is, in your bed, and you can't quite believe that you went there.

He may be the owner of a radioactively blonde barnet and a drooling leer. Or, possibly, he reeks of beer and fags and is gazing at you with a rictus grin. Either way, he is now refusing to leave and you start to worry that he may take up permanent residence at your flat.

This is how it felt to wake up to a Vote Leave win in the referendum.

And the pound crashed, and the FTSE crashed, wobbled back up again like a drunk kitten and flatlined, exactly as the experts predicted. They were the experts people ignored in favour of wanting a "victory for commonsense". Whatever the hell that means today.

Then Nigel Farage, fresh from despicably trying to claim victim status after Jo Cox was murdered, showed all the sensitivity of a hessian condom, by gloating that "we won it without a single bullet being fired". And then he shut the gate after the horse had bolted by helpfully telling us the pledge that a vote to leave would mean £350m a week for the NHS was "a mistake". Never mind that a cornerstone of the catastrophically dishonest leave campaign was that a Brexit would somehow mean a massive infusion of funds for healthcare.

Another cornerstone of the leave campaign was that "taking back control" of our borders and deciding who we let into the UK would relieve pressures on public services. Plenty of people called bullshit on this before the referendum - we will have to agree to freedom of movement to trade with the EU, same as Norway and Switzerland, and the Vienna Convention means there won't be an instant exodus of EU citizens - but this was ignored by every voter who cited immigration as their main concern.

Daniel Hannan, a Tory Eurosceptic MEP, has essentially told the "piss off, we're full" brigade to prepare to be disappointed. "All we're asking for is some control over roughly who comes in," he said this morning, watering down the tough border control rhetoric of the last few weeks.

In short, the British public has been sold a massive lemon with the leave campaign. The desire to ignore experts has been especially depressing. It is typical of an increasing race-to-the-bottom mentality that seems to be growing like a pitiful fungus. There is a disdain for the educated, as if getting an education and developing experience and expertise in a field is something on which to look down. Would these same anti-experts submit to a tailor for major surgery? After all, it's just a bit of cutting and stitching. Who needs years of medical training for that?

Educated people are being criticised for voting remain on the basis of analysing evidence and reading widely and considering a range of views. This apparently amounts to hatred of the working class. For some, voting with your heart rather than your head was a better methodology for the biggest political decision of our lifetimes.

Nigel Farage was arrogant enough to say that GDP doesn't matter if quality of life improves, except that the two concepts are connected. But nobody really challenged him on that or any of the nonsense he spouted during what was an appalling, unedifying campaign.

Areas of low immigration and high unemployment voted heavily to leave. The leave campaign was obsessed with the job-stealing ways of Polish car washers, as if they were all desperate to wash cars for a living, or somehow felt that in a free market economy, they would be unable to start their own car-washing business in competition. Never mind that there are so many educated EU citizens making amazing contributions to the country or that educated Brits work in professional jobs across Europe. Schrodinger's Immigrant was stealing all our jobs while claiming jobseekers' allowance.

And then there are the cries of "Sore loser!". With all due respect, grow up. This is not some kids' football game where a wailing six-year-old refuses to accept the offside rule. This is extremely bloody serious and the implications deserve serious discussion and analysis. If we are to come out of this unnecessarily divisive period of British political history equipped with the information and a credible plan to minimise the inevitable hit the economy will take, we need to break it down, to work out how we can find a way to move forward and prosper.

How will we make up the shortfall from losing EU funding and a possibly reduced tax and consumer-spending base? There will be job losses? Do we have a plan to create more jobs? Will the welfare state be an effective safety net in the meantime? What will the role of the public and private sectors be in this vague new world in which we now live? What will our trade relationship with the EU look like? These are all serious economic questions that need to be discussed as a matter of urgency and constructive solutions need to be found.

We also need to discuss racism. Not every Brexiter is a racist. There are people I am proud to call friends and family who voted out. But it is naive to say that racism didn't motivate some voters. We need to be prepared to look into that grim underbelly of British society and deal with the bile and hatred before it eats society alive.

All this because David Cameron was scared of losing voters to UKIP in the last general election.

The campaign turned into Boris Johnson's personal crusade to become Prime Minister. His speeches, while generally bollocks if anyone bothered to analyse them, were carefully designed to set him up as looking more statesmanlike. He made promises he had no business making about what post-Brexit Britain will look like. Right now, he is not the party leader, he is merely the Member of Parliament for Uxbridge and South Ruislip. Bad luck if any of his constituents want a surgery any time soon. Pish tosh! He is way too busy for such trifles of democracy!

I genuinely thought I'd wake up this morning with a sense of relief, with the realisation that the country didn't metaphorically shag the office creep. I was hoping we would have thought better of being seduced by one-liners and lame Facebook memes and outright lies about everything from Turkey to how laws are made, and decided to give the creep the number of a taxi company instead.

Thanks, Dave. You bet the house on this referendum and the whole debacle has been a lesson in unintended consequences that defies parody. Next time you want to pander to UKIP, meet Nigel down the pub, buy him a few pints and give him a light. After all, you have plenty in common. You are both the establishment that in no way has been defeated.

Photo by Davide D'Amico
Posted by Georgia Lewis at 09:43