Tories versus Labour: The battle of the imploding parties 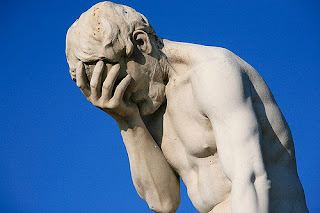 As the wheels fall off the Conservative and Labour Party clown cars after the referendum, it is too close to call as to which of the two major parties will come out of this debacle stronger. Let's take a look at both teams, shall we?

In the blue corner...

The Conservatives have been caught with their pants down. Nobody seriously expected the Vote Leave campaign to actually succeed. Hell, there were people who voted for Brexit who are surprised that the thing they voted for actually happened.

As such, there is precisely no plan for what to do next. David Cameron should have called an emergency Cobra meeting and there should be an emergency sitting of parliament tomorrow but instead, Dave resigned and hasn't been seen since. What a leader! What a statesman! He looked distraught as he resigned with Samantha tearfully looking on but this is a crisis that he created himself.

Boris Johnson, meanwhile, not only has his pants down but he has probably done a panic-poo in them too. Since the referendum, he hasn't been quite the public gloater everyone thought he'd be if Brexit happened. I'm pretty sure things didn't go according to plan.

For Johnson, a narrow Remain win would have served him well. He could still claim to speak for the "silent majority" and, knowing that David Cameron was going to step aside before the 2020 election, he could make his bid for leadership without being distracted by all that pesky work that needs to be done to extricate Britain from the EU. He shamelessly used the referendum campaign as the start of his leadership bid and was making promises about how Britain would be a land of unicorns for all if we voted to leave and even combing his hair once in a while. Of course, all his promises were smoke and mirrors because he never thought he'd need to come up with a plan to implement them.

Now the man, who as an incompetent mayor couldn't negotiate with tube drivers, is the favourite to be the next Prime Minister and thus, he's meant to lead the way as we negotiate with an entire continent that he has spent the last couple of months slagging off. That can only go well...

The other leadership contended is probably going to be Theresa May, the current Home Secretary. She was pro-remain, she certainly has more gravitas than Boris Johnson and she is largely seen as moderate and sensible. In April, she did call for Britain to leave the European Convention on Human Rights regardless of the referendum result but this is what passes for moderation in the modern Conservative Party. With that in mind, she may be keener to invoke Article 50, which is what the British government needs to do to kickstart divorce proceedings with the EU.

Johnson probably never planned to release the hounds of Article 50 and under his drunk-uncle-trying-to-walk-the-dog-after-Christmas-dinner guidance, he is bound to stall and faff and blunder about. This will only extend the uncertainty and instability and endear us less and less to the EU. Hey presto, we'll have a trade deal with the EU so pathetic, the British export market will be reduced to some obscure Welsh cheese and stuff left over from car boot sales.

In the hour, the BBC has reported that Johnson has said the UK will "intensify" cooperation with the EU (does the EU know this?) and said the 52%-48% result was "not entirely overwhelming". Jesus, Boris, don't bowl us over with your enthusiasm.

He also said that "the only change" will be to free Britain from the EU's "extraordinary and opaque" law (but doesn't seem to have specified which law) and says this "will not come in any great rush".

They are the words of a man who cannot be arsed to negotiate hard with the EU any time soon. Hell, nobody should be surprised if Johnson decides to outsource the negotiations to G4S after the stellar job they did with the 2012 Olympics security.

The one thing the Tories are good at, even when they are in utter disarray behind the scenes, is give the impression that everything is fine. Hence, as soon as the referendum results were in, 84 Conservative MPs, some Brexiters, some remainers, signed the "save Dave" letter. Dave decided to fall on his sword instead, but the letter, as cynical and self-serving as the signatories may have been, is a great way to tell the world they're not going to carve each other up with bitter factional in-fighting.

Which brings us to Labour.

In the red corner...

In the time that I've been writing this post, I've heard the news from the telly downstairs that yet another Labour cabinet minister has resigned from Jeremy Corbyn's front bench. Corbyn is refusing to step down as Opposition Leader and Shadow Chancellor, John McDonnell has vowed to manage his campaign to keep his job.

On one hand, we have calls for Jeremy Corbyn to step down in the wake of the referendum results, blaming him for an unenthusiastic campaign for Remain. Given that his Euroscepticism is hardly a state secret, at every campaign event he looked like he'd rather be having root canal work, and with a BBC report that he may have deliberately sabotaged the campaign, this seems like a fair assessment. Of course, it can also be said that there was a lack of passion among many leading Labour Remainers, with the notable exceptions of London Mayor, Sadiq Khan and Ben Bradshaw, the MP for Exeter, but there was an overwhelming feeling that voters didn't really know what Labour stood for on the referendum.

And it is hard to ignore the numbers, as much as the most devoted Corbynistas try. In the referendum and in the local elections, Labour has lost Scotland. Labour took Scotland for granted for too long and the SNP swooped in. The local elections should have been a gift for Labour but the best that can be said about the results is that they were not as bad as they could have been. In a climate of economic austerity with an unpopular Tory government, that isn't enough.

The mandate for Corbyn's leadership is based largely on the new members of the Labour Party, those who paid their three quid to join up after Ed Miliband stepped down. But the problem is that most of these members don't live in the areas where Labour needs to regain ground. In January, the Guardian received internal Labour Party data which revealed that a disproportionate number of new members are city dwellers, many with high paying jobs.

The party is struggling to attract new members among the elderly, in rural areas, in deprived areas, and among the working class. These are the people the Labour Party needs to connect with if they are ever to form government again. And these are the groups who voted overwhelmingly to leave the EU. The issue of immigration is the elephant in the room - Labour needs to have intelligent conversations without patronising people if they are going break through here. All the rise in Labour Party membership proves is that people who would probably vote Labour anyway, and are not struggling financially, can spare £3.

I predict that out of a Boris Johnson-Theresa May leadership race, Boris will win it to become the next PM.

I predict that in the inevitable general election that will happen before Christmas, the Tories will win but with a reduced majority. Therefore, it would be political suicide for Labour to ditch whomever their new leader will be. If they are to have a hope in 2020, they need to sail a steady ship, work really hard in Scotland and not be afraid of doing a deal with the SNP and possibly a resurgent Liberal Democrat party to form a coalition government.

And if nobody has invoked Article 50 by the time we have this year's next trip to the ballot box, the election will basically be a referendum do-over.

I'll check back on these tips and see just how wrong I was...


Photo by Alex Proimos
Posted by Georgia Lewis at 15:47