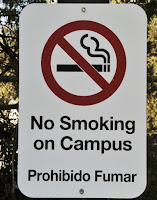 Old Dominion University, in Norfolk, Virginia, has been in the news this week after some douchey signs were hung up outside a frat house.

"Rowdy and fun, hope your baby girl is ready for a good time."

(Frankly, guys, if you're referring to your female classmates as "baby girls", you haven't grown up enough to be trusted with your own erect penis near other people. And "rowdy"? Really? That's the kind of cute-but-lame word your mother uses when you're being a little boisterous on the front lawn as in: "Enough with the rowdy shenanigans, you little scamps!".)

(Young women: Just another delivery along with the beer and pizza!)

"Go ahead and drop off Mom too".

(Yeah! What grown-ass woman wouldn't want to indulge in some MILFy fun with these fine, young men!)

The fraternity has been suspended pending an investigation before classes even start for the year.

If I saw these signs on my own university campus back in 1994, my initial reaction would be an eyeroll so hard that I'd be able to see out of my own ears. Perhaps the young women at this university should thank the members of the Sigma Nu fraternity for advertising themselves as weapons grade dickheads who should be avoided at all costs. That's what I'd tell any daughter of mine if that was the warm welcome she received on her first day of higher education.

And, hey, this is America! Land of the free! And that includes freedom of speech. If these crazy kids want to exercise that right by outing themselves as cretins, so be it.

But let's not be naive. Anyone who has ever gone to university knows that sex will happen. And not all sex that happens on college campuses is consensual. Statistics on rape in colleges are never going to be 100% accurate and this is partly down to under-reporting and poor notions of consent among young men and women.

For example, the young woman who wakes up after passing our drunk to discover a fellow student having sex with her is being raped but she might be unsure, just as her rapist might think his behaviour is perfectly acceptable and that her passing out in his room is the same as consent. Hint: It's not.

This is not a problem unique to the US. In the UK, Cambridge University introduced talks and workshops on consent in response to a survey of 2,100 female students in which almost half the respondents reported being "pinched, groped or grabbed" and more than 100 reported experiencing "serious sexual assault".

Just because someone was accepted into one of the world's best universities, that does not necessarily mean they are equipped with the life skills to be sexually responsible and respectful adults. Education about consent is important and, ideally, it should start when the kids are still at school. Because that is when people start to have sex. If we can set "enthusiastic consent" as a benchmark for sexual activity, we might start seeing campus sexual assault statistics fall and entertaining the notion of consent forms for sex at universities would become absurd.

If you seriously believe that all the kids responsible for the idiotic Sigma Nu frat house signs have sophisticated notions of consent, I've got a bridge to sell you. Given the fragmented nature of sex education across the US, any campus is going to have students joining the party with different levels of comprehension about everything from consent to homosexuality to birth control. The members of Sigma Nu won't necessarily all end up raping their classmates but it's naive to think that they're all on track to graduating as men who respect women if those signs are their idea of a welcoming gesture.

Sure, let the douchebros of Sigma Nu have their freedom of speech with their signs. And ensuring the freedom of people to go about their lives, especially at institutions of education, without being sexually assaulted is essential if we are as civilised as we claim to be.

Photography by Linnea Mallette
Posted by Georgia Lewis at 05:35