Donald Trump, Boris Johnson, a buffoon for each side of the pond 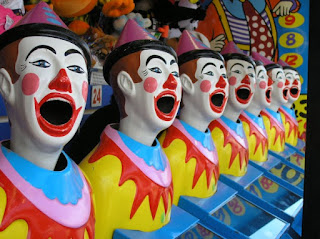 Could Donald Trump and Boris Johnson be the same person? Evil clown twins separated at birth perhaps? Whatever the case, they are two sides of the same awful coin and if we end up with President Trump and Prime Minister Johnson in five years time, two nations will be ruled by two spiteful, fiscally irresponsible men who are not nearly as funny as they want you to believe.

Superficially, both men are known for amusing hair. But in the pantheon of comedy, the hair on these two men is about as funny as burning orphans. Trump's flammable nylon skull pet and Johnson's deliberately unkempt head of straw serve as distractions from their real agendas, from them being properly scrutinised for the policies, for what they really stand for.

Both enjoy playing up their clownish personae. If you really think Boris Johnson's stammering, eye-popping schtick and his constant use of swallow-the-thesaurus words is spontaneous and genuine, you've been fooled. As you giggle while his head lolls about like a bladder on a stick, he wants you to think of him as a loveable buffoon. He loves it if you to think he is "good comedy value" because he'd rather you didn't question him on his abject failure to be the eco-friendly Tory mayor we were apparently all crying out for, on ever-increasing public transport fares, on the contractually dubious white elephant that is the Emirates cable car, on his vanity projects, on the money has has wasted on useless buses, on gluing pollution to roads, on trying to convince us his airport idea was a good one, on his complete failure to be present for TFL-union night tube negotiations despite happily plastering "Mayor of London" on TFL propaganda posters...

Likewise, Trump knows full well the internet contains more jokes about his hair, his orange face, his marriages and his tacky ostentation than any real scrutiny about policy. This week, he was placed under scrutiny by Megyn Kelly - I am no fan of Fox News but she did well at the debate this week. Trump's response to her perfectly reasonable questioning was to make a grotesque menstruation analogy. He knew the outrage would dominate the news cycle. His apologists won't care that he is a sexist and once the news cycle moves on, any policy-related questions Kelly asked will be largely forgotten.

Johnson and Trump use these idiot personae as distractions and we let ourselves get distracted. They are both as fiscally sensible as a spoilt teenager let loose with Daddy's credit card but that doesn't seem to stop people from hoping they achieve the highest office in their respective countries.

Both men love a vanity project. Trump Tower stands as a phallic edifice to Donald Trump's supposed throbbing, masculine success. He puts his name on everything he touches. Likewise, Boris Johnson loves that London has Boris bikes, Boris buses (even though they are crap) and he is most likely tickled that people still refer to his dead-in-the-water Thames Estuary airport idea as "Boris Island". And while bikes, daft buses and a failed airport idea seem lame in comparison to Trump's tower, plane and golf courses, it means that we all refer to Mr Johnson as "Boris". As if he is a man of the people, one of us, the kind of chap we'd go down the pub with for a night of top banter.

Both men have advocated policies that would not be out of place under the Stasi's awful regime. Trump is mad about a great big damn wall to keep Mexicans out while Johnson would simply love to see the secondhand German water cannon available for use on the streets of London. Kudos to Home Secretary, Theresa May, for not letting Johnson have his toys, even though he already wasted our money on them. Zero respect to Johnson for his complete lack of grace in the face of what he sees as a personal disappointment, as the act of a colleague who is out to get him, to stop the BoJo juggernaut.

If you seriously think either one of these men would be a good president/prime minister, you have been conned.
Posted by Georgia Lewis at 04:53