Australia! Land of the kitty killers! 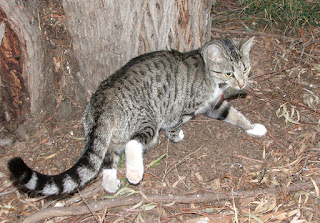 The Australian government did something this week that actually makes sense. Plans to cull two million feral cats over the next five years were announced. The internet, predictably, reacted with a barrage of uneducated horror. The way people were carrying on, one could be forgiven for thinking Australia was about to morph into a nation of psychotic kitty killers, with gangs of rogue marksmen taking pot shots at pet shops and beheading much-loved house cats as they slept peacefully on their owners' beds.

People who'd never been to Australia, much less seen an Australian feral cat in real life, were typing in capital letters, such was their fury. And naturally the arguments against the cull were, overall, daft and ill-informed.

Ironically, there were calls for a tourism boycott of Australia. That was particularly idiotic because Australia's amazing natural environment, including native wildlife, is one of the main reasons tourists visit my home country. Feral cats have been linked to the extinction of 28 native species and are threatening at least 100 more. These cats do not belong in Australia. Along with foxes and rabbits, they should never have been introduced by the British in the 1800s. The problem is being dealt with more than 100 years too late - but at least it is being dealt with.

"But humans are the worst destroyers of the planet! Leave the cats alone!" was another wail from the peanut gallery. True. We humans are doing a pretty good job of polluting the place when we're not busy killing each other for stupid reasons. But because we humans have the ability to think rationally and examine scientific evidence, we are best placed to solve our problems, including what the hell to do about a country that is overrun with an estimated 18-20 million feral cats.

The calls for a trap-neuter-release programme are well-intentioned but still misguided. The size of such a task with so many cats in a country the size of Australia would be gargantuan - and completely and utterly ineffective. The neutered, released cats would still kill native wildlife. And when they're not killing native wildlife, they are killing and injuring domestic cats and contributing to the spread of Feline Immunodeficiency Virus as well as diseases among livestock.

To support the cull is to support the survival of native Australian wildlife and responsible cat ownership. Feral cats have been breeding rampantly for generations in the wild and sometimes domestic cats end up going feral too. Cat owners need to get their pets neutered and microchipped and bring them inside at night to be part of the solution.

But if you don't want to take my word for it, click here to get the views of scientists on this issue. Feral cats are not cute kitties. The cull has to happen.

Photo courtesy of the government of the state of Victoria
Posted by Georgia Lewis at 12:40