OK, so what has gone on with the UK general election? 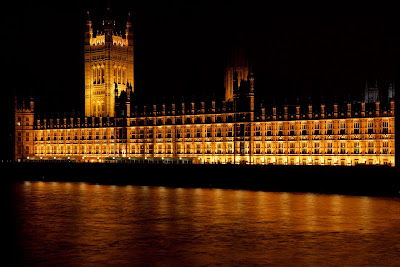 The polls predicted a close election. Britain was braced for a hung parliament and the possibility of voting again to break the deadlock. But the deadlock never happened and the Conservative Party won a majority. There will be no deals with the Liberal Democrats. With only eight LibDem MPs left in the House of Commons, they'll be able to hold their meetings in a booth at Pizza Hut. UKIP only won one seat. Labour members are in shock. And the SNP took almost every constituency in Scotland, which was about the only thing anyone predicted.

So why did vast swathes of Britain turn blue? I suspect UKIP helped the Conservatives enormously. It does not take a great leap of imagination to picture right-leaning, undecided voters across the country who were contemplating voting UKIP thinking better of it in the privacy of the ballot box. The Conservatives may have seemed a safer choice than a largely untested, gaffe-prone party that cannot quite shake its reputation for racism or sexism or being stuck in the 1950s or blaming floods on gay people getting married.

It is ironic that UKIP, the party that claims to be anti-establishment, helped to ensure the establishment retained power. Then again, this is the same party that all at once says it is in favour of free speech, constantly whines about "BBC lefty bias, appears on the BBC with alarming regularity, and called the police after Camilla Long had the temerity to make a joke about Nigel Farage on Have I Got News For You. We cannot expect any consistency from UKIP, the party that once had uniforms for taxi drivers as a policy despite claiming to be the party of minimal government interference.

The UKIP factor is more of a worry for the Labour party. In many seats, UKIP polled strongly against Labour candidates, eating into their majorities. This will mean some serious soul-searching for Labour. Ed Miliband attempted tough talk on immigration. Indeed, his bizarre stone monument named "Controlled immigration" as a promise.

For Labour, myriad questions have emerged. Will Labour need to try and out-UKIP UKIP to win back traditional working class Labour voters? Is it fair to tar all working class Labour voters as susceptible to UKIP policy? Should Labour instead try to educate voters in order to counteract UKIP's fear-mongering about immigrants? Or will Labour instead assume there will always be an element of the working class who will vote for them no matter what and try instead to appeal more to their liberal middle class supporters? Was Labour not radical enough on the NHS? Can Labour win over Green and Liberal Democrat voters in 2020 and would that be enough to dredge up a majority in five years' time? And what about being annihilated in Scotland?

Which brings us to the SNP. The Tories don't need the SNP to form a government, Labour is in no position to ask the SNP to help them take charge. The SNP rode high on a wave of Scottish nationalism but in England, English nationalism and a fear of being run by the SNP in a coalition, did not help Labour's cause. In the end, it didn't matter how many times Ed Miliband said there wouldn't be a Labour-SNP coalition. People were not convinced. As a result the SNP goal of ridding the UK of the Tories failed despite winning 56 seats.

Of course, there was also the rank hypocrisy of politicians who not so long ago were begging Scotland to stay in the union now encouraging everyone outside of Scotland to panic-vote a possible coalition away, neutering the influence of the very people they were courting during last year's referendum.

Given the SNP campaign was a strongly anti-austerity, let's-get-rid-of-the-Tories campaign, we can only assume their MPs will vote against any planned Conservative cuts in the new parliament. But even if they vote as a bloc with Labour, the Green MP and the smattering of LibDems, the Conservatives won't have any trouble getting things passed through the House of Commons. Whether the House of Lords is compliant, however, is another matter. And the Conservatives could easily face divisions, especially on issues such as Europe, if rebel MPs refuse to vote with the whip. We shall see...

And then there was the LibDems' obliteration across the whole country. London is left with just one LibDem, the cadaverously insincere Tom Brake, who has managed to convince people he is keeping the local hospital open on the strength of an e-petition so out of date it is addressed to the wrong body.

But were the LibDems punished for becoming yellow Tories? Given the number of yellow seats that turned blue, possibly not. Either there was a curiously apathetic attitude in polling booths of "Oh well, we may as well just vote Conservative, same difference" going on or perhaps there are more natural conservatives among us than we realised. With seats such as Twickenham, Sutton & Cheam and Kingston & Surbiton going from LibDem to Tory, were the more affluent and elderly voters, those more likely to vote and vote blue, coming out in force in these areas?

Oh well, maybe it is time for some good old electoral reform, eh? Remember way back in 2011 when we had the AV referendum? AV? Alternative vote? Anyone? Given that about three people turned out to vote, nobody seemed to understand what AV was, and the asinine Louise Mensch drearily sneered from the US that AV was bad because Australia and Papua New Guinea have it, it came as no surprise when the referendum failed. Now, all of a sudden, people who couldn't give a damn about electoral reform in 2011 are suddenly crying out for proportional representation instead of first-past-the-post.

In particular, losing parties are crying out for a spot of proportional representation - the Liberal Democrats and UKIP would have both done a whole lot better under that system. And maybe it isn't a fair reflection of the national mood if UKIP only gets one seat despite getting more than four million votes across the country. They are four million people the major parties will try to win over in 2020 if they are serious about governing with a comfortable majority.

But ultimately, UKIP may not matter at all in the long run. The purple pound-sign warriors can talk up their success-despite-only-having-one-seat all they like tonight. David Cameron has promised an in-out referendum on Europe in 2017. If he keeps his promise, UKIP will slink further into irrelevancy regardless of the result.

If the UK votes to leave the EU, that sucks the life out of pretty much every UKIP policy so they'd be instantly beside the point. If the UK votes to stay in the EU, the people will have spoken out against UKIP's obsession, life will go on and the UKIP MEPs will continue to be ineffective in Brussels at everything except riding the gravy train.

And as the night falls on the first day of the Conservative majority government, there will be a lot of pollsters, as well as Labour supporters, NHS campaigners, LibDems and people who'd sooner hammer rusty nails into their eardrums than vote Tory who are wondering what the hell to do now. Next up, we will have the inevitably unedifying spectacle of parties choosing new leaders as they lick their wounds. You might not like the result of this election but, chances are, you cannot look away. If you want change, however, you will have to do stuff as well as look, tweet and bleat.