Marriage equality, Germaine Greer, and those who think of the children... 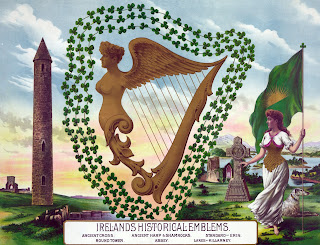 Ireland voted in favour of marriage equality for gay couples. Excellent news. Here's hoping my home country of Australia follows suit very soon. Many thought the power of the Roman Catholic church would be too strong but, given that just over 61% voted in favour, plenty of people who most likely identify as Roman Catholic also believe that if gay people want to get married, there should be no problem. Plenty of gay Roman Catholics will no doubt take advantage of this wonderful, historic change.

No Roman Catholic church in Ireland will be forced to conduct same-sex marriages. Nobody's religious freedoms will be impinged upon. Contrary to popular mythology, the Republic of Ireland does not have a state religion. It is known as a "Catholic country" because a lot of Catholics live there. Similarly, Turkey is a secular country that happens to have a lot of people who are Muslim, either observant or nominally so. The current government over there is doing all it can to piss on Ataturk's secular dream but, at the time of writing, Islam is not the state religion of Turkey.

The way in which the church will not be affected by same-sex marriage is a good example of why the further apart church and state are, the better it is for all concerned. Compare this to the absolute dog's breakfast that happened to the Church of England when the UK legalised same-sex marriage in 2012, except for the special snowflake that is Northern Ireland.

In hindsight, marriage equality was inevitable for Ireland. In 1993, homosexuality was decriminalised and the age of consent for heterosexual and homosexual sex became equal. In 2009, same-sex civil partnerships were introduced. The sky didn't fall. Perhaps now Northern Ireland might consider going down the same path instead of being given absurd religion-based privileges despite being part of an allegedly united country.

The "No" vote campaigners in the marriage equality referendum's main argument (aside from the fringe-dwelling loons who used the irrational "Next, people will marry dogs and toasters!" non-sequitur...) was that to legalise same-sex marriage would spell a decline in the traditional family, that all children need a mother and a father.

However, since 2000, lesbians in Ireland have had access to IVF and now gay couples can jointly adopt both non-biological children and step-children. There are, no doubt, plenty of people in Ireland who are horrified by this. In general, these are the same people who are horrified by abortion and want to preserve the ban in Irish law.

If a lesbian in Ireland falls pregnant, either by accident or design, these religious conservatives would not give her the right to have an abortion and they do not want her to be happily married to her partner either. I guess the only thing that would make these people happy is to force such women to give up their babies for adoption. Because that worked so well in the era of the Magdalene Laundries. Yeah. You'll have to forgive me for not being entirely convinced by their concern for keeping families together.

There is now talk that this new era of progressiveness for Ireland could lead to legalising abortion, or at least loosening some of the restrictions. If this happened, again it should be a clarion call to Northern Ireland to change abortion laws so they're in line with the rest of the UK. Of course, this would lead to the inevitable cries from the conservatives about how gay marriage leads to abortion when, for obvious reasons, gay people are not particularly responsible for causing too many abortions anywhere in the world. Indeed, when gay couples decide to become parents by whatever means they choose, it is usually a spectacularly well-planned process resulting in much-loved, much-wanted children.

Which brings me to Germaine Greer, bless her. This week at the Hay Festival, she became the accidental hero of religious conservatives when she used the example of Elton John and David Furnish and their children as an example of the "deconstruction" of motherhood. Really, Germaine? The cult of motherhood is bloody everywhere, especially if you manage to look hot while you're doing it. That is where the deconstruction is going on, where mothers are being insulted and degraded on a daily basis. It's not being deconstructed because some gay men are now parents. And it won't be deconstructed because gay people can now get married in Ireland. Get a grip.

Motherhood is still considered by many to be the pinnacle of female achievement, as if women without kids have somehow not fulfilled their full potential until they have bred. I remember a time when that was the kind of attitude that would appall Germaine Greer. Did she not notice the unseemly womb-watching of the Duchess of Cambridge? Did she somehow miss the endless media fawning as Kate and William emerged from the hospital with Princess Charlotte in an idealised, heavily styled tableau of heterosexual family values?

For good measure, Germaine criticised IVF, the very process which helps gay and straight couples become parents. She had the makings of a good point when she said that in some places, women don't know what happens to all the eggs that are produced by IVF and this is something women tend to care about. This is not the case in the UK where it is made perfectly clear what will happen to each and every egg harvested in the IVF process and this should be the global standard.

But then she went on to claim that the 1967 Abortion Act was only introduced because of lobbying by the fertility industry. Did she not notice the women marching in the 1960s to demand the right to choose? Does she think they were all there because they were getting kickbacks from the fertility industry? There may well have been lobbying by the burgeoning fertility industry at the time but that does not change the fact that a lot of women wanted the law to change and are glad that it did. Apart from a failed attempt to tighten abortion law by Nadine Dorries in 2012, abortion in the UK is not a hot button political issue as it is in Ireland and the US.

The sting has been taken out of the tail of the anti-marriage equality movement in Ireland. Maybe the sting will one day be taken out of the tail of the Irish anti-abortion lobby too. But in the meantime, we have a curious world indeed where Ireland is doing better on gay rights than Australia and Germaine Greer is echoing the sentiments of groups who have spent decades being horrified by the loudest voices of feminism. In the midst of it all, the kids will probably be all right.