Could the election ever have been all about the NHS, stupid? 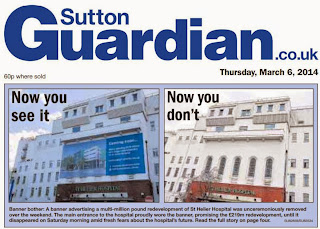 "It's the economy, stupid!" is a frequent, if cliched, explanation for why elections are won. It's so obvious. The winning party was either strong on economic policy or, as is more likely in the case of this month's UK General Election, was strong on giving a good impersonation of being strong on the economy.

If the only payrise you've received of late is down to tax cuts, if you're not struggling on a zero hours contract, if you have never seen inside a food bank, if you really don't know what the difference is between the debt and the deficit and don't particularly care to find out, if you're genuinely happy with supermarket prices and the economy's current rate of growth, then yes, it is pretty obvious why the Conservative Party came out as looking like they might be strong on the economy. Whatever. It doesn't matter what your politics are, you can probably find figures to support your argument or you might genuinely believe George Osborne is doing a sterling job as Chancellor of the Exchequer.

For the beleaguered Labour Party, the polls (Ha! Remember those wacky polls before the election?), suggested the public thought Team Red rather than Team Blue was stronger and more trustworthy on the NHS. But this didn't translate into nearly enough votes for Labour to come close to a majority. The wheels fell off for Labour on the NHS long before Ed Miliband unveiled his stone tablet inscribed with the meaningless platitude of "An NHS with time to care".

While there certainly are people in Britain who would support the NHS moving towards a user-pays system and an increased take-up of private health insurance, the overwhelming feeling I get is that "free at the point of use" remains an important pillar of the NHS for many people from across the political spectrum. People understand that we pay for the NHS via our taxes and people expect in return to not receive a bill or have to file for bankruptcy as a result of receiving NHS treatment.

I remember debating UKIP's NHS policy with a Kipper on Twitter who was desperate to reassure me that UKIP is committed the NHS remaining free at the point of use (except immigrants like me, who have not yet lived here for five years, would have to take out private health insurance...). I found that UKIP, Tory, LibDem and Labour supporters all push the "free at the point of use" line but few seem too concerned with whether NHS services are publicly or privately provided.

And so the missed opportunities for Labour to show true strength on the NHS began.

Why didn't Labour promise to look into the billions of pounds the NHS internal market costs taxpayers in administration costs alone?

When we have situations across the country such as Virgin Care running essential urgent care services at Croydon University Hospital so poorly that quality standards are simply not being met, G4S being allowed anywhere near a hospital, Serco misuing public funds in relation to NHS contracts, we have a problem. The problem is compounded by private companies being exempt from FOI laws?

At the very least, Labour could have pledged to overturn the FOI exemption for private companies in relation to NHS contracts. Why did this not happen?

A promise to cap profits of private providers in the NHS did not resonate with voters.

The National Health Action Party, the Greens and UKIP all had policies on rolling back expensive PFI contracts, which are costing us billions in repayments, meaning we frequently get one hospital for the price of nine. Why was Labour afraid of a mea culpa on PFI? PFI may have been started by the Conservatives but it went nuclear under Tony Blair and Gordon Brown. A humble admission that this was a massively expensive SNAFU and a pledge to do something about it could have been a vote-winner.

The cost of the NHS internal market and PFI contracts represent cost pressures on the NHS that make the Daily Mail's constant wail of "health tourism" pale into insignificance. They would be pledges that would not fit nicely on a ridiculous stone or have the snappy insta-appeal of the mansion tax, even though that would not come close to helping plug the NHS funding gap.

Why couldn't the Labour Party found a way to get the message out there that internal market costs and PFI are crippling the NHS financially way more than immigrants ever will?

Instead, we have much NHS fun and games already with the all-new, all-singing, all-dancing Conservative majority government. Health Secretary Jeremy Hunt is now bashing nurses over anti-social hours pay in his quest to make what is already a 24-hour service an unachievable 24-hour service. There are unrealistic promises of hordes of new GPs despite there not being enough GPs in training to achieve this, and despite Britain struggling to attract foreign GPs to make up the shortfall. It all smacks of setting the system up for inevitable failure, ably assisted by a compliant NHS-bashing media, thus whetting the public appetite for selling off more services.

Whether Labour, under the election manifesto's NHS promises, would have done any better is a moot point. Whether the new Labour leader will be able to offer a genuine, cost-effective, patient outcomes-focused alternative remains to be seen. All I will say is that if one of the "modernisers" wins the leadership contest (I'm looking at you, Liz Kendall...), I predict more of the same for years to come.
Posted by Georgia Lewis at 08:40