After the Charlie Hebdo murders, what now? 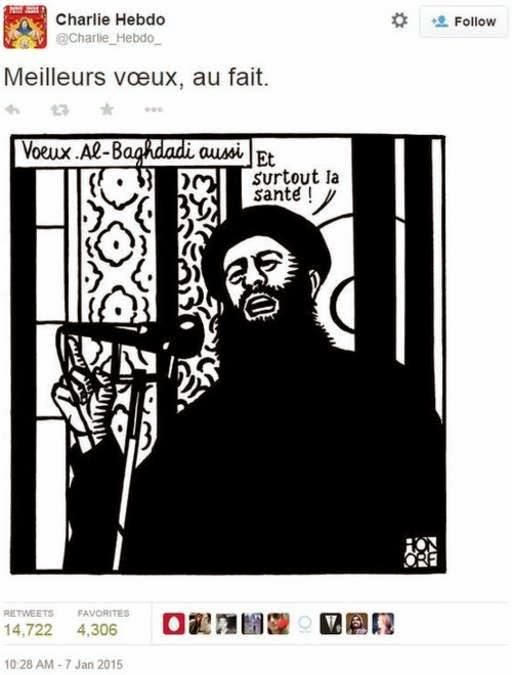 There it is. One of the cartoons that has caused at least 12 people in the office of Charlie Hebdo to lose their lives today.

For those who can't read French, it is a cartoon of the leader of IS, Abu Bakr al-Baghdadi and the words simply say: "Best wishes, by the way. To you, al Baghdadi," and he says: "Especially to your health!". One wonders how weak one's beliefs are if they feel the need to shoot 12 people over such a statement.

Yet for this and other similar cartoons, two cowardly murderers who didn't have the balls to show their moronic faces stormed the offices of Charlie Hebdo magazine and opened fire.

And the response to this latest act of terrorism, this latest attack on free speech, is the same old, same old. There's the usual blaming of every Muslim on the planet, the usual calls for moderate Muslims to speak out (which every moderate Muslim/agnostic Muslim/lapsed Muslim I know, and plenty I don't know, do all the time, over and over again, and I really do not know how much more they can do...), the usual plaintive calls for better understanding among all people of the world, the usual pointing out of violence by non-Muslims...

In short, we really don't know what to do.

You don't have to dig too deeply in the comments section of an online news story about, say, burqas to find people saying that France has the right idea on this issue, even those who may otherwise think France is a seething den of sinful socialism. The European Court of Human Rights upheld France's right to ban the burqa last year, a law that has been in place since 2010. France also bans all outward signs of any religion in all government schools. None of this stopped today's disgusting, terrifying events. Equally, Australia, the UK, Spain and the US do not ban the burqa and do allow outward symbols of religion to be worn in state schools and these countries have all experienced the deadly evils of warped Islamic extremism as well.

On top of all this, reports abound of French Jews are leaving their country because of a rise in anti-semitism, including violent attacks on people and synagogues. In 2013, a record 3,270 French Jews immigrated to Israel, a 63% increase from 2012.

Fighting poverty and ensuring everyone has access to education are important actions in the fight against extremism. But plenty of educated, affluent people have gone on to be jihadis.

We really don't know what to do.

I will share the Charlie Hebdo cartoon, although this isn't some heroic act of courage on my part. I fully expect to make it home safely tonight without being targeted by a lunatic over this blog as I anonymously walk to the tube station. I will continue to support the right to freedom of speech, freedom of expression and a free press. But I've always done this, as have so many people everywhere, and still this shit happens.

But we cannot go on censoring ourselves, censoring those with whom we disagree, wanting to ban all the things that might offend us, deliberately trying to be offended instead of ignoring that which one might find offensive, seeking to police humour, and squashing satire along the way.

I am not going to pretend I have all the answers to this one. I don't. I am not sure who does or if anyone does.But I have just seen scenes from Paris appear in my newsfeed. It's a large gathering in France's gorgeous capital city of a diverse group of people gathering in solidarity with Charlie Hebdo and, as a result, with journalists everywhere. A similar gathering is about to start in London. This is moving, important stuff and to scoff at such gatherings is to be, quite frankly, a bit of a dick.

I will end this blog post with an abridged version of my friend Luke Thornhill's Facebook status. As a sports journalist, he is thankful that the only backlash he gets in his line of work is the odd accusation of bias against a sporting team or a tweet from an angry fan, but that does not make him any less of a champion for a free press.

In a world where we really don't know what to do, Luke's resolution and subsequent actions in response to today's events sure as hell beat doing nothing at all.

I have decided to be a bit more Muslim-like and give more of what would loosely be termed as zakat. The Big Issue seller in Hull was the first beneficiary, with a cuppa and sandwich to go with his tip in return for his wares, I hope that the perpetrators of this attack die a little bit more inside on the coals of hell when they realise they're helping turn me into a better person, and that today I did it by adopting a pillar of Islam and supporting a magazine which exercises its freedom of speech in such a brilliant way. Peace be upon you.