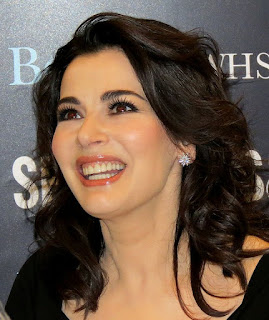 The reaction to the Nigella Lawson-Charles Saatchi assault story reminds me of the armchair heroes who come out of the woodwork every time there is another horrific shooting in America. They are the people who claim with absolute certainty that if only they were on hand in Aurora/Sandy Hook/Santa Monica, they would have saved the day and shot the bad guy dead.

Ever since the jarring pictures of the Lawson-Saatchi argument were released, there has been a similar spate of heroes-after-the-fact. People who were not at the restaurant are sticking their heads over the parapet to claim they would have done something to help Nigella. The claims of "doing something" have ranged from asking if she was OK to calling her a taxi to calling the police to embedding a shattered glass in Saatchi's skull.

And now that Nigella has apparently moved out of the marital home, she is being called upon by people who have never met her to speak out about domestic violence. In Australia, the improbably named Dee Dee Dunleavy, a radio DJ, wrote a particularly stupid blog post in which she concluded: "Nigella, like it or not, you're a beacon for women from all walks of life. If you want us to buy your books and watch your shows on how to run our kitchens, then we need you to make a stand on domestic violence."

I've written before on why the idea of celebrity role models is ridiculous and I maintain this is still the case.

Dunleavy hastily issued a ridiculous clarification and claimed she wasn't victim-blaming or calling for a Nigella boycott despite her chronically patronising last sentence. That'd be the sentence where she advocated not helping Lawson to earn a living until she "make[s] a stand on domestic violence". Uh, yeah, because encouraging the reduction of a woman's earning power is, er, so empowering, right?

But Dunleavy is not alone in telling Nigella what she must do now. Globally, she is being ordered to speak out against domestic violence, to press charges against her husband and to divorce him.

In the meantime, Saatchi has accepted a caution from the police telling the media: ""Although Nigella made no complaint I volunteered to go to Charing Cross station and take a police caution after a discussion with my lawyer because I thought it was better than the alternative, of this hanging over all of us for months."

Given the extensive photographic evidence as well as accounts from people who were at the restaurant at the time, it would not have been unexpected if the CPS decided to charge Saatchi, even if Lawson chose not to co-operate. The CPS can prosecute in domestic violence cases without the alleged victim pressing charges, although I have been told by a police officer that this usually only happens if the "injuries are worthy of Section 47 Assault or above" - or in other words, at least an assault under the legal definition of actual bodily harm, which carries a maximum sentence of five years in prison.

So what now? Whatever Lawson decides to do next is up to her.  That's the thing about choice - sometimes people will make choices that we might not find acceptable or would not make for ourselves, but that doesn't mean the choices are invalid. Nor does it mean that it is always easy for a woman, even one with all the advantages of Nigella Lawson, to simply leave an abusive man.

In the court of public opinion, an idiotic peanut gallery if ever there was one, she is damned no matter what.

If she speaks out against domestic violence, some will say she is pandering to the busybodies and that private lives should stay private, even if that life spills out onto a public street.

If she stays with Saatchi, she will be portrayed as an object of pity, a middle-class, apron-clad version of Rihanna who can't seem to break up with notorious abuser Chris Brown.

If she breaks up with Saatchi, the likes of Cristina Odone, who seemingly can't bear to see a marriage break up for any reason at all, will blame media pressure. While writing about the marriage in the media.

The media circus has now dragged on for days - Saatchi has been spotted at a restaurant without Lawson and sources are saying they hosted dinner parties after the awful incident and they seemed happy. There seems to be much consternation that Lawson has not confirmed via her spokesperson whether her move out of the marital home is permanent or not.

Seriously, this is getting ridiculous. Nigella Lawson cannot be blamed for lying low for a while and she is under no obligation to tell the media anything about her private life. Can you imagine what it must be like to open pretty much any given newspaper and see photos of yourself as your husband grabs your neck or read opinion pieces by people who presume to know what is best for you and profess to know more about your relationship than you do?

Meanehile, the Evening Standard has run a series of pro-Saatchi pieces every day since the story broke - he is a columnist for the ES after all. Is this their bizarre way of telling the world it's all fine, he is a top bloke, it was just a "playful tiff" (ugh...), and he will continue to write for them.  Still, it's a change from their daily pro-Boris Johnson nonsense, I suppose.

It's one thing to raise awareness of domestic violence via the media, to use the Lawson-Saatchi story as an example of how domestic violence can happen to anyone - but it is quite another to use the media to tell a grown woman how to live her life. Nigella Lawson is an intelligent, successful woman - we can only hope and assume those closest to her are offering her all the support she needs at the moment. And we can only trust that she will make whatever choices are best for her without blaming her, patronising her, talking about her as if she is a stupid child, disapproving of her or judging her.

Instead of stalking Mayfair restaurants and getting columnists to dole out unsolicited marriage guidance counselling, it would behoove the newspapers of Britain to report on some other news. There's plenty of it about at the moment.

Here is a rare articulate piece of writing on the whole sorry story: http://sarahpinborough.com/2013/06/19/i-dont-know-where-to-put-my-feet/