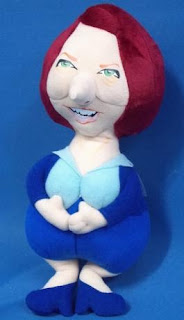 I have not lived in Australia for almost eight years. Hell, why do I even care what goes on politically back home? But I do. Aside from the fact I still pay tax in Australia, I have friends and family there and I don't want them to suffer any government idiocy, regardless of who is in power.

And then Julia Gillard was deposed. In favour of Kevin Rudd. The man Gillard deposed before narrowly winning an election. Whatever you think of Gillard, it took some serious guts to call a leadership spill knowing it would almost certainly mean the end of her time in office. After much Murdoch press-led speculation, the time came to cut the shit and end the nonsense.

So Gillard's gone, Rudd is the Prime Minister again, the dust has settled, will anything change?

I get why Gillard was binned. The polls indicated electoral catastrophe for her against Tony Abbott, the leader of the Liberal party (which is actually Australia's conservative party and Abbott is the king of saying stupid things that are far from liberal, but I digress...). Kevin Rudd was polling way better than Gillard and it looks like he has a chance of, if not winning the next election, then at least ensuring the Labor party's representation isn't reduced to a few people and a dog.

And speaking of dogs, a company called Paddington Pups have released a Julia Gillard chew toy. See the picture at the top of this post. It's ever so clever. For $33.70, a little piece of Aussie sexism and cognitive dissonance can be yours.

We can argue until we're blue in the face as to whether Gillard was a victim of sexism. I don't think it was the only factor in her downfall but it certainly played a role. Why was she so unpopular in the polls in comparison to Rudd?

Growing up in a very politically minded household, I have been observing Australian politics for close to three decades. I was encouraged to take an interest in politics from a very early age (although, aged four, my summation of former Prime Minister, Malcolm Fraser, as a "bum face" was possibly not my most nuanced moment).

In that time, I can safely say I have never seen the level of vitriol thrown at Gillard thrown at any other Prime Minister. And when I say vitriol, I mean personal attacks, stupid questions and irrelevant comments about everything from the size of her arse (yeah, well-played, Germaine Greer. Way to carry the torch for the sisterhood!) to her hair colour to her accent (Australian Prime Minister has Australian accent. SHOCK!) to the contents of her uterus or lack thereof. Endless rivers of venom spewed forth, most of which had precisely nothing to do with any policies.

The context of her famous misogyny rant at Tony Abbott was unfortunate (Google "Peter Slipper"...) but the content was spot-on. Abbott had no qualms about using the sexist hatred of Gillard for his own ends.

But it's OK, everyone. She has gone now. And in her wake are the usual "well, this will put off women running for office" comments. When Rudd was originally deposed, nobody said that'd put men off running for office. Nor did Paddington Pups launch a Kevin Rudd chew toy, complete with a stupid sales pitch that showed a lack of understanding about Australian politics.

Now we have Rudd back, and as a bonus, he has some some wishy-washy rhetoric on asylum seeker policy. Hell, when you can't be sexist, you can always try and pander to the racists, I guess. Although if Rudd was so offended by asylum seeker policy under Gillard and, especially while he was the Minister for Foreign Affairs, why didn't he speak out about it then? Or cross the floor with the carbon tax vote? Or do anything to dissent against Gillard on a policy level?

Congratulations, Australia. You can look forward to another Cyanide versus Arsenic election.