So, I visited my friendly local mosque... 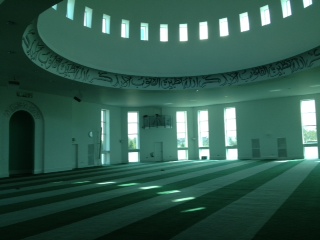 A few weeks ago, I wrote about a ridiculous piece in the Daily Mail, where David Goodhart, a writer with a book to peddle, portrayed Merton, the borough where I live, as some sort of hateful war zone where immigrants, especially Muslim immigrants, were not integrating. I did not recognise the Merton Goodhart wrote about and I was appalled - although not especially surprised - that the Daily Mail readily published something with rubbery use of stats and blatant lies.

As a result of this original blog post, I wrote a follow-up post and another post when David Goodhart responded over Twitter. And then I was invited to visit the mosque which formed the central theme of Goodhart's disgust for the "polite apartheid" that he claimed was going on in Merton. The Baitul Futuh mosque was not, as Goodhart claimed, built to replace a dairy and steal local jobs. There was a seven-year gap between the dairy closing down and mosque construction starting. In the seven-year gap, the old dairy site became a magnet for drug-related crime. Now there is a mosque on the site, this is no longer the case.

On my visit to the mosque, I learnt about its construction - part of the old dairy was used to build the minaret , the building is clad in elegant, self-cleaning marble, light enters the part of the mosque where women pray via walls created from the same material used at Chelsea's home ground - oh, and it didn't cost British taxpayers a penny to build.

The mosque shares its car park with a nearby college and the college uses large rooms in the mosque to hold exams. This is not just an example of the mosque integrating with the community, but an example of the mosque actually helping save the taxpayers money - allowing use of the mosque for exams means the college does not have to fork out for expensive building works. Why anyone would disapprove of this is a mystery to me. There are no reports of students leaving the mosque after an exam as extremists or under pressure to convert to Islam. It is a lovely, quiet building - I can see why it'd be a more pleasant place to do an exam than a cold school hall.

Bushra, a woman I consider to be my newest friend, showed me around the mosque. Having visited mosques in the Middle East and Turkey, I was mindful of dressing respectfully and wore a long top over loose jeans and I had a scarf draped around my shoulders. I asked if I should cover my hair with the scarf when I entered the mosque but was told this was not necessary. If I had've been asked to cover my hair, I would have done so without complaint. Equally, I wouldn't walk into a church wearing a bikini and I'd ask someone to leave my house if they turned up wearing a "Keep calm and carry on raping" T-shirt - it's about showing respect to your hosts.

As we entered the main part of the mosque, we removed our shoes and Bushra talked animatedly about Islam and in particular about the Ahmadiyya Muslim Community. It is the 73rd sect of the Islamic world and many adherents of this sect have sought safety in Britain because of persecution by other sects, especially in Pakistan. Unlike other sects, the Ahmadiyya community believes the messiah was Mirza Ghulam Ahmed, who lived from 1835-1908. Bushra explained that Ahmad was dismayed by fanatical Islamic beliefs and championed a religion of peace and justice. He spoke against religious bloodshed and recognised the nobility of teachings by Abraham, Zoroaster, Moses, Jesus, Krishna, Buddha, Confucius, Lao Tzu and Guru Nanak.

It would appear Ahmad was a man ahead of his time - he did not like the drive towards fanatical Islam in the 19th Century and it is hard to imagine he'd be thrilled by events such as the 9/11 and 7/7 terror attacks, the current Israel-Palestine situation or the fighting that has gone on between Catholics and Protestants in Ireland for that matter.

As Bushra told me, the concept of "jihad" is rooted in one's personal struggles rather than a desire to destroy other people. Suicide bombers should not be considered true Muslims as the Islamic view of suicide is much the same as that of many Christian faiths.

As such, I am quite sure that when I visited the Baitul Futuh mosque, I was not entering a dark and terrifying den of extremism. I am confident that there is no secret south London branch of al Qaeda operating from this mosque. I did not feel any pressure to become radicalised or to convert to Islam. Instead, Bushra and I drank tea, ate cake and samosas, and chatted for hours about the mosque's work, especially with secular charities, about the role of women and about life in general.

It was easy to relate to the reluctance of women at the mosque to pray alongside the men, given the head-down-bottom-up position for prayer - it's not a position I'd be thrilled to do in front of a group of men either. And while the men of the mosque have a group for the over-40 age group, the women do not because, quite simply, plenty of women were not keen to admit to being over 40.

Bushra told me about how her marriage was arranged, but not forced. Consent by all parties is important and, having met her husband at the mosque, it is clear that their marriage was not a case of forcing two people together with little in common. Arranged marriage was a way to meet someone with whom she could build a life - it is all too easy to judge this concept from the outside looking in. But Bushra pointed out that online dating isn't really any different - it is just another way to try and match yourself up with someone with whom you have stuff in common. Which makes sense. You can be very specific when you go trawling dating websites, right down to height and eye colour, just as an arrangement is about meeting certain criteria. Having a future husband/wife checklist is as universal as women not wanting to point their bums in the air around men or admit they are older than 40.

It reminded me of a conversation I had with Zara, the wonderful Muslim woman who used to clean my apartment when I was a spoiled expat living in Abu Dhabi. She told me that all most people want is peace and to live a peaceful life with their families. While families can take many forms, including your circle of friends in many cases, Zara's point was that underneath it all, people are not that different wherever you go.

The Baitul Futuh mosque is open to everyone. You don't need to make an appointment, you can simply turn up and someone will happily show you around without judgement. I said that it was similar to being able to walk into an open church and it was interesting that Bushra said she wasn't sure if she would simply enter a church. I'd never considered it from that perspective before - just as non-Muslims may be unsure about whether they can walk into a mosque and take a look around, plenty of Muslims are probably equally uncertain about whether they can walk into a church.

If you scoff at the idea of visiting a mosque, if you still believe that all Muslims are terrorists and simply believe every word in the Daily Mail, you are part of the problem. And if you are peddling the "Britain is a Christian country!" line, you'd better be as willing to show Muslims around your church (you do go to church, don't you?) as Bushra was to show me around her mosque.