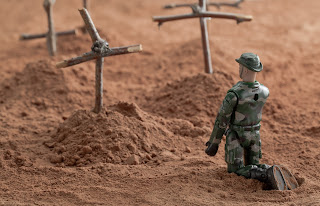 April 25 is Anzac Day. This is the day when Australians and New Zealanders remember those who have died in war. As with Remembrance Day on November 11, it is important to not only honour those who have died but to look ahead, to try and forge a world where war is always the last resort, where better solutions might be found. But in a world where nations have a stunning inability to learn from history, I grow evermore cynical that this ideal may ever be achieved.

My maternal grandfather, Lindsay Gordon Wright, served in Papua New Guinea and Japan during WWII. Over the years, he was quick to share funny stories about condoms ("passion rations") being used to keep water out of rifles, practical jokes played by mischievous Australian soldiers on British officers, and his disdain for military police. But it really wasn't until the last decade of his life - he passed away in 2010 aged 89 - that he really spoke of the horrors he witnessed.

"War is just old men sending young men to die," was his succinct summation of it all.

Serving in WWII changed Lindsay. He was among an incredible group of Australian soldiers who set an amazing example by spending two years in Nagasaki after the war to help rebuild a city devastated by the dropping of an atomic bomb. He learned to speak Japanese, he came home with a deep respect for Japan and its people, which was unusual in his generation, and he refused to pick up a gun again. This was also unusual as he was a farmer and one of the ongoing arguments of the Australian gun lobby is that farmers "need" guns.

True to his word, Lindsay never touched a gun again, he was a strong advocate of gun control ("I've seen what a gun can do to a man," he'd often say) and he never spoke ill of the Japanese. And every time another war started, he'd shake his head in despair.

The invasion of Iraq over WMDs that were never found made him particularly angry. Iraq is a major buyer of Australian wheat and my grandfather was a wheat farmer While it's easy to dismiss his objections as being motivated by vested interests, that misses the bigger picture. War destroys economies as well as lives. Unless you're an arms dealer.

Meanwhile, every year there is a pilgrimage by Australians and New Zealanders to Turkey for an Anzac Day dawn service among the war graves. April 25 marks the anniversary of the landing of Anzac forces at Gallipoli - an event that was to start months of futile fighting over not much territory at all. It was disastrous with lives lost not only through fighting but also disease and suicide.

Over the years, there have been news reports on Anzac Day about the disrespectful behaviour of young visitors to Gallipoli with footage and photographs of drunkenness, empty bottles and cans left behind, people having sex in war cemeteries not uncommon. Thankfully, that doesn't seem to have happened this year - the reports in years gone by offered an awful mix of jingoism and ugly Australian behaviour that made me glad I visited Gallipoli in October 2003 instead. It was peaceful, there was time and space to contemplate it all in the war cemetries for Anzac troops as well as Turks, and the whole place is a lesson in the futility of war.

At a museum, there is a heartbreaking monument to an entire class of Turkish medical students all killed in Gallipoli in 1915. We will never know what world-changing potential was lost from that particular slaughter. There are graves aplenty of teenagers. It is horrific.

Amid all this, there was a moment of bonding between my father and our Turkish taxi driver. They hugged and they agreed that the soldiers on both sides were all victims while British generals removed from the action made life-altering decisions. "British generals with their gin-and-tonics!" was the insult levelled at soldiers' superiors by the taxi driver. But it was still a moving moment.

There is a more nuanced memorial at Gallipoli with the words of Ataturk, the founder of modern Turkey:

"Those heroes that shed their blood and lost their lives...
You are now living in the soil of a friendly country. Therefore rest in peace. There is no difference between the Johnnies and the Mehmets to us where they lie side by side here in this country of ours...
You, the mothers, who sent their sons from faraway countries wipe away your tears; your sons are now lying in our bosom and are in peace, after having lost their lives on this land they have become our sons as well."

They were Ataturk's words from 1934. They still resonate today as we refuse to embrace each other, to accept differences and to rejoice in what we have in common . As too many of our sons (and daughters) return in coffins from war zones, blind patriotism does not behoove any of us. Solutions that do not involve guns, bombs, drones, tanks, landmines, grenades, mortars and so on and so forth are still, it would tragically appear, to be light years away. Lindsay would shake his head.

Lest we forget. But may we also learn.