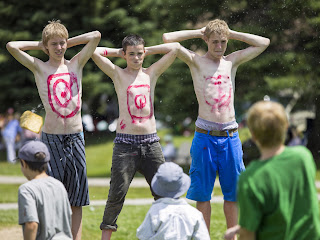 It's easy to get annoyed at young people. God, don't they just talk bollocks on public transport, listen to awful music that can still be heard even when they have earphones in, they spend all their time texting and sexting, they seldom form proper sentences, they have no idea how good they have it, bring back National Service and so on and so forth et cetera et cetera et cetera...

And in the light of this week's two big news stories -17-year-old Paris Brown quitting her post as Britain's first Youth Crimine Commissioner in Kent after a Twitter scandal; and the death of Margaret Thatcher - it has not been a great week for opinionated young people or their right to freedom of speech.

Sure, there are plenty of ill-informed young people out there who come out with half-baked opinions, especially when it comes to politics - but I'd rather young people express their views, whatever they may be, and for others to engage in discussion, than for young people to be silenced when speaking up or to be completely apathetic and have no opinions at all.

Regardless of what our political views are as adults, it's a rare person who doesn't look back on their teenaged self and laugh or cringe at some of the things they said or wrote.

It makes me a little bit relieved that there was no Twitter when I was a sometimes sanctimonious 15-year-old. But I stand by things I wrote for the school newspaper on topics such as abortion, smoking in restaurants and wearing school uniform. I was lucky to have that platform in the pre-internet era, where we would produce the Kelso Kronicle with Apple IIe computers and save stories on floppy disks. If 15-year-old me in 1991 had a Twitter account, there is every chance I might have tweeted something that would have bitten me on the bum as an adult.

And so we have the sorry situation of Paris Brown slammed without a trace of irony by the Daily Mail for "vile" racist and homophobic tweets as well as tweets about getting drunk, having sex and taking drugs (by "taking drugs", the pearl-clutchers are horrified at a tweet about how she wanted to bake hash brownies, it's not as if she was the Pablo Escobar of Kent...). The offending tweets were sent when she was aged between 14 and 16.

Naturally the Mail buried the bit about tweets where she complained about Direct Pizza phone staff having poor English skills and said that everyone on Made In Chelsea looks like a "fucking fag". These are the kind of sentiments that would result in the inevitable "Red arrow me all you like but she is only saying what the rest of are thinking" comments.

And so after a week in the £15,000-a-year job, Brown has quit her post. What a farce it all was. The post struck me as an attempt by the Kent police to appear all cool and down with da kidz. But nobody had the wit to check Brown's Twitter feed, something that has, for better or worse, become a pretty standard practice among many potential employers these days. The embarrassment was avoidable and now those stupid tweets will probably haunt her for years to come. At the time of writing, the police were looking into whether her tweets constitute a criminal offence. It's getting completely stupid now.

The whole "youth police czar" smacks of gimmickry which seems especially unnecessary give that Kent Police also has a youth panel made of up people aged 11 and over to give feedback to the police from an under-18s point of view.

Meanwhile, in the wake of the death of Margaret Thatcher, plenty of people who weren't born, or were very young when she was in power, have spoken out. Some young people are Thatcher fans, some are not, but the last 24 hours has been open season on anyone young having opinions on this defining period of British history. Instead of lazily saying: "What would you know? You weren't even born then!", it is surely more constructive to have discussions with young people who are clearly interested in politics.

If you start telling people their opinions are not valid and try to silence them, you're a hypocrite if you then bemoan low voter turnout and political apathy among young people.

Do you have opinions on Hitler or Stalin or Mao Tse Tung despite not living through any of their regimes? Most people do. This is because we can all research and learn from history (or simply watch the History Channel...). Give young people who are interested in politics a bit of credit. Bullying people off Twitter because you think they're too young to have an opinion is mindless. If you do that, you're the one who needs to grow up.