Before tonight's broadcast, after the awful events in Manchester 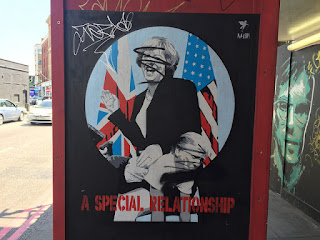 Tonight, Theresa May and Jeremy Corbyn will be interviewed separately by Jeremy Paxman on Sky News and Channel 4. The interviews will take place in front of a live studio audience and the party leaders will take questions.

Will tonight be the real turning point, one way or another, in this sorry excuse for an election campaign?

During the TV debate before last year's EU referendum, the turning point was Boris Johnson's barn-storming pro-Brexit speech. It was reckless, it was dishonest, and he probably didn't believe half of what he was saying, but it worked. When the massive cheer went up at the end of his disingenuous word salad, when he yelled: "INDEPENDENCE DAY!" like he was leading a feral pep rally, I got that sinking feeling that he'd convinced enough people to vote leave. As a militant and unrepentant remainer, I felt a bit ill when I woke up after four hours' sleep on 24 June 2016 and discovered I'd been proven right.

On Monday night, the election campaign was suspended in the wake of the hideous, vile murders of innocent people in Manchester. To take a day off campaigning was the right and respectful thing to do. However, as long as Theresa May upheld the suspension, a vacuum was created and this was filled with stupidity from across the board.

There were the inevitable false flag-obsessed conspiracy theories. People actually thought Theresa May somehow orchestrated the terror attack because Labour was creeping up in the polls. That is a thoroughly despicable accusation to make, especially without any evidence of any sort to back it up. I still think Theresa May is a terrible, incompetent Prime Minister who arrogantly thought she could run a seamless campaign, but I do not for a second believe she is behind the attack.

But her suspension of the campaign for more than a day caused this vicious nonsense to grow a life of its own.

That said, there should be a constructive, national conversation on whether police cuts, which started in 2010, and continued apace ever since, might contribute to terror attacks not being foiled or the spread of radicalisation. Theresa May needs to be pressed on this tonight by Jeremy Paxman.

When Theresa May announced that the terror threat was upgraded to "critical" and that we could expect to see more armed police officers as well as more soldiers on the streets of the UK, the election campaign was still suspended. This did not strike me as reassuring. It struck me as authoritarian. The sight of a spectre-like Mother Theresa commanding the podium to tell us what was best for us - and during a suspended campaign in which debate was therefore stifled - was chilling.

When the terror alert was dropped back from "critical" to "severe" just a few days later, the whole sorry situation became a dark farce.

It is not inappropriate to ask if police cuts are hampering anti-terror and anti-radicalisation efforts. When reports are emerging of British Muslims doing the right and patriotic thing by reporting their suspicions to the police, but then nothing is really done about it, it is proper that we examine whether we have enough police officers and whether resources are being deployed in the best way possible.

When Amber Rudd, the useless Home Secretary, was interviewed by Andrew Marr yesterday, she appeared to have no idea whether the Manchester murderer was on a watchlist.

And that brings me to the second form of idiocy that filled the void. Even before members of the Manchester murderer's family were arrested in connection with terror-related offences, there were calls for entire families of terrorists or suspected terrorists to be deported.

On Facebook, a post by Tam Khan, in which he pleads with his fellow Muslims to integrate in Britain, went viral. Overall, it was not an unreasonable post. His frustration with "uneducated" people who kill innocents is shared by any decent human being.

However, the call to deport not just the criminals but their families too was ridiculous. Aside from the obvious injustice of deporting people who have committed no crime because they happen to be related to some arsehole, the whole idea is unworkable and raises more questions than it answers. To what country would you deport people who were born here? Where would the "deport the whole family" policy end? Immediate family only? Cousins? People related by marriage? Innocent children? A senile grandparent? Wouldn't deporting entire families en masse simply lead to further resentment and radicalisation? What if a family member who was guilty of no crime was going to be sent back to a place where they'd be in danger? For example, what if a terrorist had a gay sibling and homosexuality was illegal in their country of origin?

Surely such a policy only serves to move problems elsewhere rather than solve them?

"But it'd be a deterrent to someone thinking of committing terrorism!" come the howls from the peanut gallery. No. It's not a deterrent. Does anyone seriously believe that someone so vile and twisted, someone who is prepared to not just kill children but to blow themselves up with a nail bomb, gives a damn about any family members they would leave behind?

There are now five-and-a-half hours to go before Theresa May and Jeremy Corbyn are grilled by Jeremy Paxman and audience members on live TV. I do not expect Paxman to give either party leader an easy ride and nor should he. I do not expect either party leader to come out with any truly courageous or effective solutions to any of the issues outlined in this blog post.

However, I would not be surprised if one of the leaders has their Boris Johnson TV moment this evening. It just remains to be seen which one it will be.


Photography by Matt Brown/Flickr
Posted by Georgia Lewis at 06:57