General Election 2017: What a load of rubbish 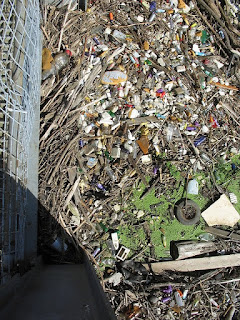 My husband worked for many years on regional newspapers in Britain and he said that whenever he had to cover a council meeting, the debate would always boil down to a dispute about the bins.

There is no shortage of rubbish-related issues for British people to get angry about. Letters pages in regional newspapers are home to missives that run the garbage gauntlet from the grumpy old bugger who feels genuinely oppressed by having to separate the recyclables right through to the smug eco-warrior who boasts that last year, their household only produced enough waste to fill an empty jam jar. In the city of Bath right now, people are raging over unsightly wheelie bins. Oh, the humanity.

Hell, every Tuesday morning when I walk to the tube station, I find myself joining in the national chorus of harrumphing about rubbish. Monday night is bin night in my neighbourhood and this means that on Tuesday morning, I find out which people in my street are pathetically lazy when it comes to rubbish disposal.

My ire is particularly fierce for the residents of the mid-terrace houses who, I assume, either cannot be arsed to take a bin out to the footpath via the back lane, won't carry a bin through their precious house, or refuse to store a bin in their front garden as if it's the home design equivalent of having one's genitals out in public. These people instead put their rubbish out the front of their houses in black plastic bags and never seem to use the food waste bins or recycle anything. Unsurprisingly, the urban foxes love to rip open these bags so leftover dinners and pooey nappies are strewn over the footpath. Delightful.

I tut loudly as I accidentally step in someone's abandoned vindaloo.

Now rubbish has become an election issue in multiple constituencies. The local Conservatives sent out a letter a few weeks ago complaining about the prospect of Labour-controlled Merton Council changing from weekly to fortnightly bin collections and whining about providing residents with more bins for rubbish and recycling. Frankly, if these means we only have to take the bins in and out every two weeks rather than every week, I'm all for it. It's the worst job of the week. I hate it. And if it means people are more responsible with their waste and take the time to rinse out empty jars and yoghurt pots for recycling, that's even better.

Such is the local obsession with rubbish, Stephen Hammond, the Conservative MP for Wimbledon, gave the issue more prominence on his leaflet than Brexit. 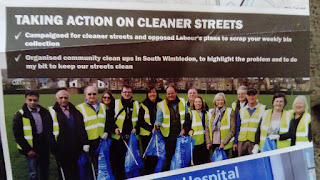 Local Conservatives have managed to convince people to put posters up in their windows featuring a picture of an overflowing wheelie bin and the fuming words: "NOT ON OUR STREETS!". Of course, this is an easy PR win for them. It's easier for them to campaign on bins than cuts to health and social care in the neighbourhood because those cuts can be traced to central government and that's currently run by, you guessed it, the Conservatives. Awkward. And not something they want to talk about in the lead-up to a general election.

Just up the road from Wimbledon, in the constituency of Carshalton and Wallington, the Tory challenger to Tom Brake, the incumbent Liberal Democrat MP is one Matthew Maxwell Scott.

Like Hammond, Maxwell Scott would sooner amble naked along the Southbank at high noon than make too big a deal about Brexit on the campaign trail. Like Hammond, he is trying to fool people that the local hospital will keep all its services under a Conservative government. He even had the hide to pose outside St Helier Hospital with Jeremy Hunt.

And like Hammond, he is all about campaigning on the bins.

Maxwell Scott even tweeted a link to a Spectator column entitled "Forget Brexit. What really matters is rubbish" in which he features prominently. This is literally what he wants people to think about as they cast their votes on 8 June in Carshalton and Wallington. Rubbish. He wants people to vote with rubbish foremost in their minds, not the biggest political, social and economic upheaval of our lifetimes.

And he could well take the seat from the Lib Dems, despite Brake's apparent if often baffling popularity. The constituency falls in the borough of Sutton, which voted heavily to leave the EU, unlike the borough of Merton next door, which was strongly pro-remain. It would appear the Daily Mail's "London metropolitan liberal elite" bubble ends in Merton.

As long as the people of Carshalton and Wallington remain convinced by Maxwell Scott that Theresa May is the best person to lead Brexit negotiations, even though she will be as effective as homeopathic brain surgery, he can win it.

And he will really win big if he campaigns hard on the bins and waste management - the LibDem-controlled Sutton Council is inept and scandal-prone, especially in relation to a waste incinerator and the cosy relationship between local LibDems and Viridor, the company planning to build said incinerator.

On top of all this, Maxwell Scott, like Stephen Hammond with Merton Council, is making a big deal out of Sutton Council's unpopular changes to bin collection. #SuttonBinShame is a local trend on Twitter.

Now, don't get me wrong. Waste management is important. Of course, for any waste management system to be truly effective there comes a point where local government moves back and personal responsibility moves forward - people cannot expect the council to separate their recyclables for them, hire a skip after building work or drive them to the tip to dispose of a raddled old mattress. Despite claiming to be the party of personal responsibility, there is very little talk of this radical concept whenever Conservatives bang on about bins. They are firmly on the side of those who think separating one's own rubbish and thinking about what they throw away are enormous, politically correct burdens.

Yep, that is where we're at with 17 days to go before the election. We are reduced to witnessing candidates campaigning about bins. Never mind that bins are a local government responsibility rather than a Westminster responsibility. The local Tories don't want people to think about separation of powers when they vote. They want us to think about bins, not Brexit.

Photography by James Grimwood/Flickr
Posted by Georgia Lewis at 11:01