In defence of anger 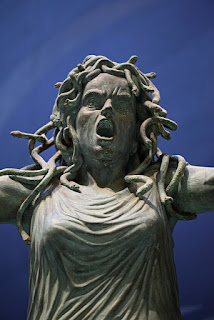 People across the world are angry. They are rising up in response to the actions of President Donald Trump. And they are told that American politics are none of their business unless they are actually in America. Never mind that American foreign policy affects the whole world and we are part of the world, as much as we'd like to get off it some days. That sort of global view doesn't wash with the current tribe of Trump apologists.

Angry women in particular are being told to calm down, especially if they have the temerity to be angry while living in a western country instead of being angry in Saudi Arabia.

Apparently, women can only be angry if they live in repressive shitholes and therefore women have absolutely nothing to be angry about if they live in anything resembling a democracy. This always seems to come back to some intellectual bankrupt yelling "BUT SAUDI WOMEN CAN'T DRIVE!" as if western feminists think this is OK and as if none of us have ever spoken out about this, or countless other oppressions against women in Saudi Arabia and other restrictive states.

Apparently, women are not allowed to care about issues that affect the lives of women in countries other than the one they live in.

Apparently, women who lead comfortable lives should just shut the fuck up and not speak out on behalf of our sisters in countries where they may not have a voice.

Frankly, I've had enough. Mansplaining has reached Everest-like heights. In recent weeks, more than one man has tried to tell me I should hail Kelly Conway as a feminist heroine because she successfully managed a presidential campaign. Yeah, get back to me when you can tell me why helping a self-confessed sex pest win high office is some sort of victory for women. Equally, I am not about to get my blue stockings out in support of Theresa May's embarrassing sycophancy to Trump, something that could have been replaced by diplomatic caution if only we'd voted to stay in the EU.

Then there was the genius-with-a-penis who told me women were already equal where he comes from (Turns out he comes from India... Yeah, sure, honey. That is another column for another time as I'm sure my Indian female friends would agree.) and that we should wait and see what happens with Trump's reinstatement of the global gag rule and then we can "discuss" whether women should be angry about it. Never mind that there is plenty of evidence that girls and women in developing countries have suffered when funds that are used for essential healthcare are taken away for ideological reasons.

Today, some twat on Twitter told me that because I am a feminist, surely I must be a student, a vegan and unable to cook, Er, no, no and no.

And another bloke had a pop at me because I pointed out that it was poor media strategy for Jeremy Corbyn's Labour to do a public protest on the NHS on the same day as the women's march. Cue further explanations on how feminism should be done along with accusations that I - and by implication, other women - don't care about healthcare. Again, we are capable of caring about more than one thing.

I'm the first to agree that I am not personally the victim of horrific oppression. I am nobody's sex slave. I can drive. I have a management job. I have access to every women's health service I need without cost. I don't need to ask my husband's permission to do anything. I married a man of my own choosing. I have money of my own. I dress how I please. I have an excellent life.

But why should I, or countless women like me, stay silent? Why shouldn't we speak out? Why shouldn't we use whatever platforms we can access to shine a light on issues we think are important? What is wrong with speaking out, especially if it is on behalf of women who are held back from doing so?

Of course, mass movements are always messy, not always coherent, and can be perceived as lacking focus. The women's marches which happened around the world in response to Trump's elevation to the office of POTUS were not always perfect. There were events where sex workers, trans women and women of colour felt excluded - these are issues that feminists need to deal with if they are to be successful about changing the world. But it is no surprise that there were conflicting views - that is the inevitable result of intersectionality.

And there was a very real sense among the women marching globally that this was not just about an obvious sexist ascending to power. It was a chance for more localised women's issues to come to the fore, for women to have a chance to speak out against multiple bees in multiple bonnets. There were women who took to the streets having never marched before.

The real challenge now is for people to take real action beyond the marches to happen. It is all too easy for people to look back on marches over the years and ask what was achieved. Wars still happened, it looks like the UK is still leaving the EU, last night's marches won't on their own bring down the Trump presidency.

But everyone who marched last night and the day after the inauguration showed the world that there are places where we have the freedom to publicly protest, to see where the power of free speech might lead, to set an example for countries such as Saudi Arabia where there is no freedom of assembly, to quite simply be heard. Hell, I'm a militant pro-choicer but I'll even throw the recent March for Life into the mix here - not because I am anti-abortion, quite the opposite, but because I believe that even those with whom I disagree have the right to peaceful protest.

And that is what is happening - protests are making headlines, the pictures will live on in years to come, this will be taught in history classes in the coming decades. Actions are just as important as marches but, regardless of your politics, if you live in a country where angry people can march, where peaceful protest is a right, you should be proud and grateful.

Photography by Chris Brown/Flickr
Posted by Georgia Lewis at 11:29