NEWSFLASH! BRITISH TAXPAYERS ARE NOT FUNDING THE ETHIOPIAN SPICE GIRLS! 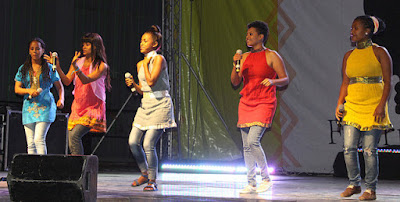 This week's right-wing fauxrage was all about British foreign aid funding Yegna, "the Ethiopian Spice Girls". Unsurprisingly. the hate-fuelled, ill-informed charge was led by the Daily Mail and The Sun, with much smug crowing after Priti Patel, the hard right populist excuse for an International Development Secretary, a woman now leading a department she wanted to abolish, announced the £5.2m grant would be withdrawn.

1. The only thing Yegna has in common with the Spice Girls is that it is a five-member, all-female group. The Spice Girls was set up to as a moneymaking venture. Sure, the "girl power" message may well have inspired plenty of girls and women to take an interest in their own empowerment, and it'd be churlish of me to dismiss that, but the "girl power" slogan was a marketing tool, first and foremost.

2. Yegna is part of a bigger project called Girl Effect. Girl Effect works in multiple ways to empower girls and young women in Ethiopia as well as other parts of Africa. Since 2013, Yegna has reached millions of girls through music, drama, a radio talk show and online platforms, discussing issues such as child marriage, forced marriage, violence against girls and women, female genital mutilation and ensuring girls complete their education. Ending child marriage, forced marriage, violence, FGM and girls not completing their education are all essential not only for their own safety and empowerment, but to fight poverty.

3. As well as Yegna, the Girl Effect projects include Ni Nyampinga, which educates girls and their communities on education, sexual health and violence prevention, online youth clubs and mobile platforms allowing girls to communicate with each other and share ideas, job creation in the fields of research and data collection, and a programme to encourage girls to study in the field of technology in Nigeria, soon to expand to Rwanda, Ethiopia, India and Indonesia.

4. Sadly, "UK foreign aid helps a broad-based project that empowers girls and women to finish their education, not marry as children and not be subjected to FGM, all of which helps fight the root causes of poverty in Africa" does not make for as snappy a headline as "ETHIOPIAN SPICE GIRLS AND YOU'RE PAYING FOR IT!".

5. A common howl from the outraged right was "FOREIGN AID SHOULD BE FOOD DROPS!". The problem with limiting aid to food drops is that food gets eaten. And then more food is required. But with food drops, nothing is done to create jobs that enable people to buy food, or to improve agricultural methods so food can be successfully grown, or to ensure kids are going to school so they can go on to work in skilled and professional jobs, or to stop girls from marrying young and never reaching their full potential. Food drops are like putting a sticking plaster on a compound fracture.

6. Anyone who watched TV in the 1980s saw the harrowing scenes of famine in countries such as Ethiopia and this helped create two false narratives. The first was an inaccurate image of Africa as a homogenous blur of parched landscapes full of starving children, when it is a diverse continent of varied landscapes and climates and differing levels of poverty in different nations, many of which have a growing middle class. The second was a mentality that food drops equal effective aid. As per my fifth point, it is not effective in addressing the root causes of poverty. Creative ways to bring people out of poverty need to be explored and supported.

7. It is naive to think all aid funding goes to projects that help people and that none of it ends up in the coffers of corrupt governments. But by directly funding projects such as Girl Effect and Yegna, the money has a much better chance of being used constructively rather than funding some dictator's new Bentley, again another stereotype when democracy is becoming widespread across African countries.

8. There was the additional fauxrage in the last couple of weeks about, according to the increasingly parodic Daily Express, "UK foreign aid spews out of cash machines in Pakistan". This created inaccurate images of every Pakistani simply rocking up to their nearest ATM to greedily hoover up thousands of our British pounds. Again, it was hateful, inaccurate reporting on the Benazir Income Support Programme which helps people living on less than a dollar per day - it has enabled children to stay in school, empowered marginalised women to earn a living, improved healthcare and enabled people to start saving money. Educated, empowered people who are earning an income are less likely to be radicalised. It is a hand-up rather than a hand-out and it is working effectively. The aid is distributed via ATMs as this is a cost-effective, ensures it goes to the people who need it, and prevents fraud.

9. It is also naive to think that the motive for spending money on foreign aid is entirely altruistic. In the long term, there are additional trade and investment benefits for countries that get involved in aid projects. Indeed, foreign investment, when done properly is a win for all parties and often more effective than traditional forms of foreign aid. Multiple African countries, for example, benefit from foreign investment in energy, construction and infrastructure projects, especially in countries such as Nigeria and Ghana where local content laws require employers to hire local people and use local companies and suppliers wherever possible.

10. The UK spends 0.7 per cent of GDP on foreign aid. We can afford this and we should continue to ensure our money is being spent responsibly on projects that address the root causes of poverty across the world. Unfortunately, Priti Patel is the wrong person to be in charge of this budget as she demonstrated this week by letting inaccurate, hateful headlines that pander to racists sway her decision-making. She has thrown girls and young women in poverty under a bus with her latest hard right populist stunt. Yes, this is where we are in 2017 and it is shameful.


Photography: US Embassy Addis Ababa/Flickr
Posted by Georgia Lewis at 06:06