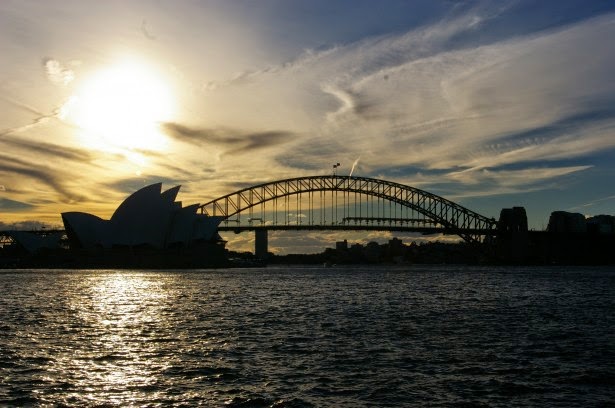 The gunman is dead. Two hostages are dead. The idiocy started up within minutes of the story breaking. It was horrible to watch it unfold from my sofa in London, the unthinkable happening in the city where I spent almost a decade misspending my twenties, the city where my father grew up, and where we spent school holidays with much-loved grandparents.

There was a heart-stopping moment when the news channels announced that hostages were taken in a cafe in Sydney's Martin Place. My sister works in Sydney's equivalent of London's Square Mile. Was she one of the people who decided to have a coffee at that particular awful moment? The relief when she texted me to say she was safely in her locked down office was safe was only trumped by the text she sent to let me know that she and her colleagues were safely evacuated with a police escort and she was on her way to pick up her kids.

But when the world is gripped by a siege that went on for hours, you soon realise it's not just about you and yours, no matter how personally affected you feel by the day's events.

Inevitably, there was misreporting, rampant speculation and general bullfuckery. Was that an IS flag being held up in the window by terrified hostages? Was the gunman a member of IS? Had he planted a bomb? Had he threatened to behead anyone? The ridiculous Daily Telegraph newspaper outdid itself in fanning the flames of hysteria by rushing out a 2pm edition with the moronic "DEATH CULT CBD ATTACK" front page headline with a picture of the gunman.

Prime Minister Tony Abbott wasn't doing too badly at his press conference until he felt the need to mention the budget. It is one thing to urge people to carry on as normal, to not let extremist fools dictate how we live our lives. It is quite another to use the press conference about a genuine matter of life and death to chuck in some propaganda about the economy.

And then plenty more people shared the photo of the gunman, giving whatever the hell he was trying to represent the oxygen of publicity. Or they took selfies, gurning away, as close to the cafe as the police would allow them to be. Instead of simply going home. Or they blamed every Muslim on the planet for what was unfolding on TV and online.

The best possible outcome would have been for none of the hostages to have lost their lives and for the gunman, Man Haron Monis, to be arrested  and properly questioned. It looks as if he was a lone wolf rather than a member of some highly organised terror cell. We may never know the full story because he is now dead and whatever information he had has died with him.

What we do know is that Man Haron Monis was disorganised, his demands were incoherent, and hostages were able to escape. He was ham-fisted terrorist. A fool. A deeply disturbed individual who wrote revolting letters to the families of dead soldiers. Last year, he pleaded guilty to harassment charges and was sentenced to 300 hours community service.

Man Haron Monis had been indicted as an accessory to the murder of his ex-wife and as of yesterday, he was on bail after being charged with sexual assault relating to an allegation from 2002. Between 2000 and 2002, he had been charged multiple times with similar offences. If any good is to come out of the horrific events of the past 24 hours, it may behoove NSW Police to look into how they handle sexual assault cases. Is a lack of resources affecting prevention? It could well be that this hate-filled bellend should have been off the streets years ago. Again, we will never know. Changes to the bail law in the state of New South Wales may also come under review as this appears to have led to Monis not being remanded in custody before trial despite his record.

It may also be that he had untreated mental health issues. This is not about making excuses for a killer. It is about creating a place where mental health issues are addressed in a timely manner, regardless of who you are and what your illness might drive you to do.

And in the midst of this, a hashtag emerged - #illridewithyou - a means of reaching out to Sydney's Muslim community, to break down the culture of fear, for people to not panic on public transport just because someone who might be a Muslim gets on board, to make it known that people are not blaming a complex religion made up of 72 sects.

It is a reminder for us not to be brutes.


Photography by Sean Riley
Posted by Georgia Lewis at 11:20