We just don't know what to do with boobs... 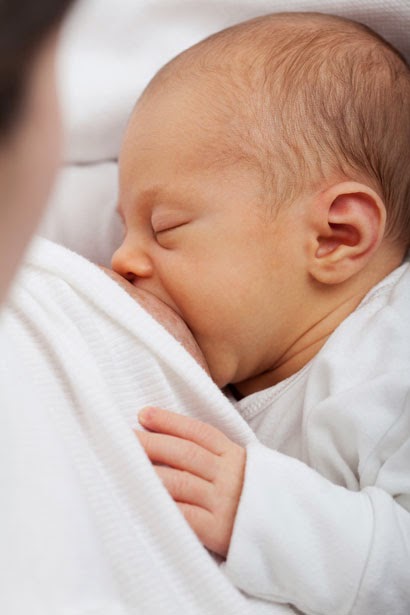 Once again, women cannot win. I have no idea if Louise Burns was "attention-seeking" when she pointed out Claridge's bizarre attempt to make her breastfeed more "discreetly" by suggesting that a napkin wigwam should be draped over her baby. And, frankly, I really don't care.

Dressed demurely while having a meal in one of London's most expensive hotels, she was never going to be a poster girl for oppressed women of the world, but I doubt that was her aim. The napkin situation is hardly on par with FGM or a Boko Haram mass kidnapping, but just because far more horrendous things are happening to women elsewhere, that doesn't mean we can't have an intelligent conversation about breastfeeding in public or exposed breasts in general.

Except that hasn't happened, has it?

Seriously, she was not being "ostentatious" (nice one, Nigel...), there was no visible nipple, rivers of milk weren't gushing all over the table and leaving puddles on the floor. Has anyone bothered to ask whether any diners were so offended by the sight of Ms Burns unobtrusively feeding her child that it put them right off their cream tea?

Then the idiots came out in full force.

"Why can't she breastfeed in the toilets?" they ask. Er, because eating in a toilet, even a posh one at Claridges, is unhygienic.

"If she can breastfeed in public, I should be able to take a dump/urinate/masturbate in public!". No. Not even remotely comparable. Go away.

"Why can't she express milk into bottles?". Why can't people stop dictating to women what they do with their breasts?

Then there are the people who are fine with Page 3 girls but not OK with public breastfeeding. For what it's worth, I have no issue with either use of boobs because, as I've just written, WHY CAN'T PEOPLE STOP DICTATING TO OTHER WOMEN WHAT THEY DO WITH THEIR BREASTS? Offended by a nursing mother? Don't look! Offended by Page 3? Don't buy The Sun! I realise this makes me some sort of minority feminist. I don't care.

This ludicrous brouhaha came in the same week that additional idiots experienced a mass gross-out because Madonna, at the age of 56, had the temerity to get her boobs out. Then there were some who are opposed to Page 3 but found a bare-breasted Madonna to be empowering for older women. At what age do bare boobs stop being exploitative and start being empowering? Christ, this is confusing.

And let's not forget the poor, muddled people who are fine with Page 3, not fine with public breastfeeding, and also want to ban the burkha. I ranted on this a while back - the niqab and the Plimsoll line of modesty - women's modesty is something that every dickhead has an opinion on even though it's nobody's damn business. Get your boobs out and you might be a slut or a bimbo without a brain or you're a cause of sexual assault. Cover them up and you'll probably be OK, unless you cover them up in something Islamic, in which case, you are causing sharia to creep in. Get them out to breastfeed and you're an attention-seeking exhibitionist Earth mother who knits her own lentils. Get them out on a beach in Spain by all means - but only if your boobs meet a certain standard of perkiness. We've all seen how the media treats a woman if her "bikini body" is not up to scratch. If you didn't attain the perfect bikini body before your holiday, obviously you must not go topless, you grotesque cow. But don't cover those chest puppies up too much... It's a fine line between a muu-muu and an abaya.

And there was the inevitable disappointment of a woman coming out in full support of the pearl-clutchers, such as Melissa Kite writing a dizzying spew of overreaching bile for The Spectator about the "frenzied glorification of motherhood". That headline was posted, apparently without irony, above the pictures of Ms Burns looking about as far from a frenzy as choir practice, but nothing could stop Ms Kite's irrational barrage of hate. Still, we've come to expect this sort of woman-slagging-off-another-woman nonsense on a regular basis. Behold Sarah Vine's awful riff about Jack Monroe's sex life in the Daily Mail. She could have disagreed with Monroe's politics without coming across as a nasty homophobic prude, but that would not satisfy the awful appetite out there for pieces where women say horrible things about other women and, thus, the death knell of feminism can be sounded yet again.

So, in this catfight context, it was inevitable that another woman was going to come out and put Ms Burns, the scandalous breastfeeder, in her place.

Every time there is a breastfeeding debate, someone always points out that the disproportionate outrage turns women off breastfeeding. Quite. Condemning nursing mothers as exhibitionist hippies who just feed their kids the way nature intended because they are brazen attention-seekers is ridiculous and unconstructive. Equally, shaming mothers who bottle-feed as abusive or lazy is just as pathetic.

Finally, on a dark and tragic note, the Claridges saga coincided with the death of Charlotte Bevan and her four-day-old daughter Zaani. They were found dead on a cliff face at Avon Gorge, two miles from St Michael's maternity unit, where Zaani was born. The noise surrounding Claridges has driven this story out of the news cycle. While this is most likely a blessing for Charlotte Bevan's grieving family, the outcomes of the hospital inquiry into these deaths will be worth attention. A line of inquiry relates to Charlotte Bevan stopping her anti-depressant medication so she could breastfeed as a possible contributing factor. It is possible that a troubled woman has paid the ultimate price for her desire to choose breastfeeding.

As such, if you're making a mindless racket about women who choose to breastfeed in public or do anything with their breasts of their own free will, you might want to take a long, hard look at yourself and work out why these women make you so angry. The problem is with you, not the owners of the breasts.


Photography by Petr Kratochvil
Posted by Georgia Lewis at 08:57