What is the point of a first lady? 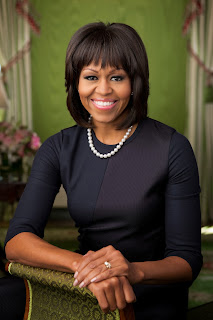 Michelle Obama has been condemned for promoting healthy eating for kids, Laura Bush was criticised for not being enough of a feminist, Barbara Bush's weight was mocked, Nancy Reagan's lack of weight and astrologer habit was laughed at, Samantha Cameron and Michelle Obama's fashion choices are put under constant scrutiny, Hillary Clinton endured absurd scrutiny about the state of her marriage while Bill was in the White House, Justine Milliband can only be considered as a respectable potential Prime Minister's wife because she and Ed finally got legally married. And so on...

These women are often high achievers in their own right but they are mostly famous because of who they married. The expectations put on these women is frequently ridiculous. People whine that they are "disappointed" with Michelle Obama as a first lady because she hasn't shaken things up enough. But if she did let loose with, say, a pro-choice campaign or whatever was stirring the bees in her bonnet, she'd still get slammed by others for being too political.

Ugh. Even the term "first lady" implies an absurd ideal of femininity that few of us will ever reach.

But it is different for "first men". For starters, the term "first man" sounds ridiculous, like a made-up spot in a cricket team. We don't care what they wear. We don't expect them to support some fluffy charity. We don't see them on the covers of magazines. We seldom get their views on anything much.

The exception to the "first man" rule was Tim Mathieson, partner of former Australian Prime Minister, Julia Gillard. He had the temerity to not be legally married to Gillard and to work for a living as a hairdresser. As such, he was accused of being gay (because in Australia, clearly, being gay is the worst thing ever and it is obviously impossible for a heterosexual man to cut and colour hair...). And even then, he wasn't expected to take on a charity or do anything much beyond being a law-abiding citizen.

But Mathieson's treatment was an extension of the mindless sexism that plagued Gillard's ill-starred term as PM. Gillard didn't fit the traditional mould of a married politician. This seemed to confound people, the kind of people whose tiny minds are no doubt blown by the concept of gay people getting married. Whoa!

Yet in Iceland, the former Prime Minister Jóhanna Sigurðardóttir, was openly lesbian. Life went on without her getting slammed down with a load of stupid homophobia. It would appear Icelanders have mastered the art of minding their own business when it comes to the sex lives of their leaders.

If only we could all mind our own damn business in Icelandic style.

Sure, there probably are women out there who aspire to be the wife of a president or a prime minister. Whatever. If they are that sad and shallow, it is probably for the best that they are not aspiring to be presidents or prime ministers themselves. Instead, those whose husbands do rise to great heights will be expected to be decorative, an "asset to her husband's campaign", and to be a public figure, only not one that is too controversial or supports anything too radical or unladylike. It also helps if she is a "fashion icon", has photogenic children who never burp or fart in public and she is into something suitably feminine like interior design.

But this is part of a bigger pile of bullshit. This is the pile of bullshit that deems that leaders should be married, that unmarried leaders are somehow defective, that men, especially married men, are better leaders, that gay leaders are still a bit weird and controversial, and that wives of leaders cannot simply do their own thing. And as long as we keep feeding the pile of bullshit with daft expectations on first ladies, we will not get any closer to being represented by politicians that actually represent all of us. We will miss out on some great people ever being elected to powerful positions and we will continue to be the poorer for it.
Posted by Georgia Lewis at 11:17