G4S, BBC, police: All in it together? 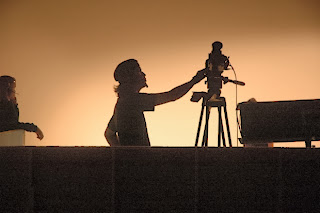 So far, this is what we know about a BBC staff being prevented* from working on a balcony at the Conservative Party Conference in Manchester yesterday...

1. There was a large protest about NHS cuts and privatisation - 50,000 people marching on the CPC - in Manchester.

2. It was a peaceful protest. Only two arrests were made.

3. BBC political correspondent Norman Smith did not film live coverage of the NHS demonstration from a balcony at the CPC venue.

4. According to Norman Smith's Twitter feed (@BBCNormanS), security staff had been told by police not to allow the BBC access to a balcony overlooking the protest, but no reason was given for this ban.

5. On the Greater Manchester Police Twitter feed (@gmpolice), it has been denied that police prevented the BBC from filming.

6. Whoever manages the police Twitter account did say that people were "prevented from entering plaza area outside venue reducing potential tensions between protestors & delegates".

Firstly, the balcony in question is private property in that it is part of the venue where the CPC is currently being held. But to say the CPC is a private event is a little absurd. A BBC reporter wanting to film here is not the same as demanding to film, say, a wedding at the same venue.

The CPC has been getting wall-to-wall coverage on the BBC Parliament TV channel, as did the Labour and Lib-Dem conferences. It is important in an open, functioning democracy that BBC, as well as all other news outlets, cover the party conferences. And it is important that people are free to protest at party conferences, regardless of their views. If a party conference is targeted by protestors, that should be covered and every assistance should be given to the media to properly cover it. If a balcony is a good vantage point for getting live footage of a protest, that should be made accessible to the media just as the CPC is open to cameras and reporters.

The NHS protest as well as the events of the conference are inextricably linked and need to be properly covered. Even if you would happily see the NHS disbanded tomorrow, it cannot be denied that 50,000 NHS-supporting people giving up part of their weekend to protest the party conference at which the Prime Minister and Health Secretary were both present is not newsworthy.

He tweeted: Also to be clear. I was stopped by security staff who said they had been told by police not to allow access. No reason was given #cpc13

Smith doesn't elaborate as to whether he challenged security staff. Nor does he say if he contacted Greater Manchester Police to ask why filming from the balcony was not permitted. All we have from the police is a tweet about other people being denied entry to other areas reduce "potential tensions between protestors and delegates".

Can anyone from the security company (G4S, by the way... Remember them? The company that did such an appalling job of London Olympic security that the army had to be called in...) or Greater Manchester Police elaborate as to what danger could have been caused by allowing filming to take place from a balcony? After all, a balcony would offer a safe, aerial shot of the protest. A bulky TV camera wouldn't be getting in the way of protestors from a balcony, would it? If filming took place from this particular vantage point, BBC staff would not be getting in the way of the police officers patrolling the protest either.

All in all, it sounds like it was a good place to film live events without obstructing either protestors trying to get a message across or police officers trying to do their jobs.

So, here are the questions that the public deserves to have answered. Our taxes pay for the police force and the BBC so accountability is crucial.

1. If nobody's personal safety was going to be compromised by BBC staff working from a balcony, what exactly was the problem?

2. Was there a problem with the BBC running live footage of the protest? Is it the live aspect of filming an event as unpredictable as a protest that caused consternation?

3. Was anyone from the Conservative Party passing on directives about how BBC journalists should do their jobs to members of the police force who then passed these directives on to a private security company?

4. Did the police force and G4S in their combined actions yesterday cross a line from simply ensuring people stayed safe to dictating how a media outlet does its job?

5. How strongly did Norman Smith protest when disallowed access to the balcony?

6. If Norman Smith proceeded to the balcony and carried on filming regardless, would he have risked being arrested?

I know I am not alone in wanting these questions answered. And if you still think this is a storm in a teacup, just remember how many important stories have been broken precisely because journalists showed some backbone and didn't bend to petty rules. A media populated by obedient people is not a media worth having.


* "Prevented" as far as we know from the journalist's Twitter feed. If he wasn't prevented from filming from the balcony, it is reasonable to gather that he would have filmed from the balcony and there would not be any questions that need to be answered about police and G4S interfering with journalists doing their jobs properly.