In defence of Private Eye... 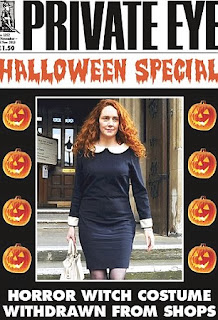 I am sharing this week's Private Eye cover because I can. Not because it is Private Eye's finest ever satire. It's not. I am sharing it because, despite an attempt yesterday by police officers to remove it from sale at a newsagent near the Old Bailey, this cover has been ruled by the Attorney-General to not be in contempt of court. Thus I am free to share this image without risking a prison term. This is a good thing.

Mr Justice Saunders, presiding over the trial of Rebekah Brooks, Andy Coulson, Stuart Kuttner, Clive Goodman, Cheryl Carter, Charlie Brooks and Mark Hanna, concurred with the Attorney General saying: "It's meant to be satire. You ignore it. It has no serious input and is not relevant to your considerations."

There are several charges faced by these seven people. Brooks is charged with illegally intercepting communications, conspiring with others to commit misconduct in public office, as is Coulson and Goodman; and conspiracy to pervert the course of justice, along with Carter, Hanna and her husband, Charlie Brooks. Nobody is being charged with witchcraft so, at a very literal level, the cover is not in contempt of court. Kuttner is charged with illegally intercepting communications.

The judge also described the cover as being in "especially bad taste". But this is not a crime. Nor should it be. We could argue all day as to whether making a witch joke about a woman is misogynistic or about 400 years out of date, but that isn't what this is about.

This is about threats to press freedom in Britain.

What is alarming is that two police officers approached a newspaper vendor to inform him that the publication may be in contempt of court. It is heartening that the vendor knew the law and asked for a court order. Which obviously didn't exist.

Ironically, in the midst of calls for more press regulation, this trial is an excellent example of why we don't need more laws, regulations or Royal Charters interfering with the press. All the charges faced by these seven people are for crimes which already existed before anyone had heard of Leveson. And like Leveson devoting hardly any time to the internet in his lengthy report, the notion of two police officers trying to stop a vendor selling Private Eye near the courthouse despite this being the online age is rather laughable.

Just as many US states should probably look to enforcing existing gun laws properly instead of making more laws, it would behoove British lawmakers to look at existing laws that affect the media, see how effectively they are enforced, and make sure that justice isn't just for the super-rich before adding even more laws to the books. Instead, we have a new and stupid law in which a publication is still liable for the plaintiff's costs in a libel action even if the plaintiff loses and it is proven in a court of law that the publication told the truth. If that isn't a law designed to make the media fearful and to work in a constant state of trepidation, I don't know what is.

As Private Eye editor Ian Hislop himself said on a recent episode of Have I Got News For You, Britain does not have a "pretty press" but it does have a free press. Of course it can be argued that a press that is largely owned and run by capitalists is never going to be entirely free but I'd still prefer a press where market forces and self-regulation rule rather than government. Or Hugh Grant.

Self-regulation seems to be like Kryptonite to many of the left but it is intriguing that one of the best examples of self-regulation came from the Guardian group. The Guardian has, on one hand been a cheerleader for Leveson but on the other hand, it took full advantage of press freedom with the Edward Snowden stories. This is indeed a curious contradiction and the anti-Leveson Daily Mail slagging off the Guardian over this reeks of sour grapes over not getting the scoop. When its sister paper, the Observer ran a piece by Julie Burchill in defence of a piece by Suzanne Moore in which she was accused of transphobia, there was an outcry. The Observer decided to take the piece down.

If I was the editor, even though I thought it was a rather clumsy, unkind piece, I would have left it up and encouraged discussion. But it was decided that Burchill crossed several lines and, gauging the mood of the day, the Observer decided to act. The government didn't demand that they act. There was no need for the police to be called. Nobody was arrested. And a piece of writing that horrifed large swathes of the left was removed apologetically. A perfect example of self-regulation that the left cannot complain about.

And how about another example of self-regulation? In Australia, I worked at the now-defunct antipodean edition of FHM as the lone sub-editor. Not long before I started, another example of self-regulation happened. The mag's disaster-of-the-month spot had run without incident for a long time but when the monthly disaster was Hillsborough, complete with comedy captions on the photos, a relative of one of the victims saw the feature and complained loudly. Again, it was decided that a line had been crossed, the magazine's publisher publicly apologised and a substantial donation to a relevant charity was made.

As a result of that rather expensive incident, just in time for my colourful tenure at FHM, it was decided that on the serious stories (such as features on injured 9/11 firefighters, traumatised war veterans, the sort of stories Lose The Lads Mags campaigners don't realise make their way into some of the mags they'd like to ban...), we'd run straight captions rather than joking about stuff like limbless soldiers and save the funny captions for the rest of the mag. Again, the public mood was gauged, steps were taken to produce something that was at the time still very popular, there was no need for new laws or for the Australian government to intervene.

Self-regulation can and does work. It goes in every media outlet across Britain on a daily basis as decisions are made and boundaries pushed out or pulled in. In light of this week's attempt to take Private Eye off sale, last week's cute kitten cover was rather prophetic. 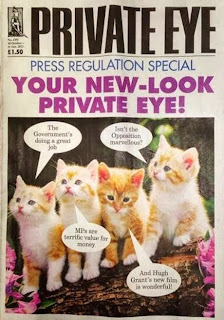 As Hislop said in the same episode of Have I Got News For You, you shouldn't ban publications such as the Daily Mail, if you don't like them, just don't buy them (or give the website the clicks for which it is so hungry).

Take some responsibility as a consumer of the media - seek out news sources that you find to be fair, balanced, that publish stories in the public interest, that offer perspectives you might not get in the mainstream media. If you are reading this, you clearly have access to the internet. Take a look at what's out there. Share it with your friends. Just as the press should be free, you are free to challenge what is said in the press and you are free to choose where you get your information from.

And if the biggest winner this week is Private Eye sales, that is good. In every edition, there are swathes of stories which should be on the front page of every paper in the country but only ever end up in Private Eye. Take a look. And have a read of this excellent piece by Nick Cohen. It might be your first step towards taking responsibility for your media consumption rather than calling for more laws.