The niqab and the Plimsoll line of modesty 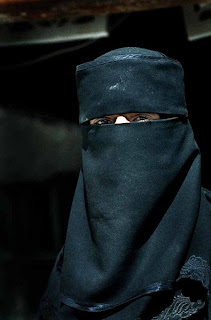 Has anybody who is currently exercising a disproportionate vomit of rage over the niqab ever actually spoken to a woman wearing one? Do they know personally of any niqab-wearers? Have any of their rights actually been violated because of a niqab?

While a woman who is forced to wear a niqab is having her rights violated on a daily basis, every woman who wears whatever the hell she likes, whether it's a niqab or a bikini, is not. That is the basic starting point for not advocating a ban on the niqab, except for genuine reasons of security and identity, such as airports and courtrooms. In airports in Muslim countries, women who wear the niqab have to show their faces at passport control, usually to a female member of staff. It's not as if there is some bizarre rule in other countries that allows veiled women to board planes sight unseen.

The first time I saw a woman in a niqab, I was 15, on holiday in Malaysia. The woman was shrouded from head to toe in grey with only her eyes peeking through a slot and a really thick pair of glasses. It all seemed comical and I found it almost impossible not to laugh. I'd never seen a woman dressed like that in rural Australia.

I may have evolved somewhat since then. I regularly spoke to women in niqabs when I lived in the UAE. The first time, I was in a Dubai bank and was served pretty quickly thanks to the ladies' queues they often have in banks there. I mentally noted that I'd never actually spoken to a woman with only her eyes showing and, at first, I had a ridiculous urge to speak louder as if her eyesight was somehow sharper than her sense of hearing. Then I realised she could hear me just fine, she was perfectly helpful, and I got on with my day.

On another occasion, I spoke at length to a veiled woman in an estate agent's office in Abu Dhabi. I have no idea what her job was - she was more interested in learning about Australia - but she had a big glass office. After talking for a while, I stopped noticing the black cloth across her face and my imagination filled in the blanks as to what her face might have looked like. Suddenly, the muezzin rang out, she excused herself to pray and then continued the conversation without missing a beat.

Even though a niqab hides a major part of a woman's identity from the wider world, every woman behind the niqab is a human being with her own story as to how she came to be wearing such a garment. I completely understand why people find it confronting, weird, scary but as soon as we start banning it from public life, we create a new series of problems.

For women and girls who are forced by husbands, fathers and brothers to wear the niqab, a ban will make them even more invisible. Women who are under this kind of awful male control would be at risk of not being allowed out in public at all by the men who have appointed themselves their guardians. While many feel it is not ideal for women to be walking the streets or attending educational institutions with only their eyes on show, at least they are out in public, they are accessing education and engaging with other people. If these women were stopped from working or studying or leaving the house at all by the men in their lives, they may disappear without a trace. If any of these women want to get help to escape domineering family members, a law that means they may be kept indoors is not going to help.

Which brings me neatly to the bigger picture of abuse of veiled women. It is easy to imagine the glee and dancing in the street by readers of The Sun if a niqab ban ever became law. But it won't do a damn thing to help women access domestic violence assistance, to come forward to report abuse or to leave awful family situations. It's a simplistic response. Plenty of women who are not wearing niqabs struggle to come forward to report domestic violence or leave horrible relationships. Why would it be any easier for a woman who is made to cover her face by a male relative and lives in the fearful shadow of an awful interpretation of Islam?

In France, the niqab is banned but no woman has been prosecuted for wearing one and no man has been prosecuted for forcing a woman to wear one (although it is perfectly reasonable to pass a law against forcing women to do anything against their will). The laws don't appear to have done a damn thing to stop abuse towards Muslim women either in their own homes or by members of the public.

If the niqab is banned, will this clear the way for the banning of the hijab or the abaya too? For other items of religious clothing? What about Roman Catholic nuns who still wear the long enclosure veil? And if you're the kind of idiot who likes to slag off women in "revealing outfits" and you also rail against Islamic clothing, where do you draw the line at either end of the modesty spectrum? Is there some sort of dual Plimsoll line of modesty whereby there is too much coverage at one end, because it is a Muslim thing, and then too little coverage at the other end because you think a woman looks like a slut?

Whenever a law is passed that dictates what women can wear, whether it forces them to cover up or not, nobody really wins.