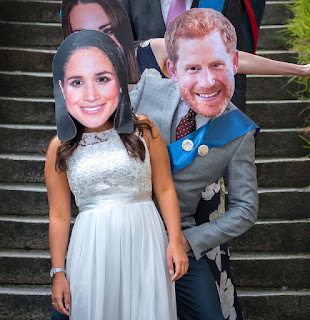 Here's the thing about the royal family - even though their lives are far removed from ours, we still feel like we know them. Based on their limited, highly controlled interviews, absurd magazines and the occasional tell-all from a "palace insider", we reckon we have them all figured out.

Hell, I have Kate and William pegged as a nice but dull couple, the kind of people you'd trust to feed the cat while you're on holiday - but you wouldn't give them the task because then you'd have to invite them over for dinner and that would be excruciating. But Zara and Mike seem fun so I'd happily give them the house keys while I was on holiday. And - this is my controversial opinion - I think Camilla would be a right laugh too. She can pop over for a cheeky G&T.

We know them on first name terms even though we're supposedly meant to address them by ludicrous titles. And as of this weekend, Meghan and Harry will gain their very own ludicrous titles as they embark on married life and attempt to carve out their place in the world.

And speaking of places in the world, with the bizarre news that Prince Charles will walk Meghan at least halfway up the aisle today, in the absence of her ailing father - and despite her mother being in town - plenty of wags have suggested that finally after nearly 70 years on this planet, the hapless Charles has found something to do. The poor bugger has spent his entire life resembling a slightly beside-the-point Quentin Blake illustration.

Of course, the past week's who-will-walk-Meghan-up-the-aisle TMZ-fuelled brouhaha meant everyone felt the need to share their views on the whole notion of men giving brides away. Let's be honest - "giving a bride away" is hardly a feminist statement but when I got married at the ripe, old age of 34, Dad, a man who supports me in all I do, walking me down the aisle was lovely

That said, now we all know Prince Charles is doing the honours, opinion is divided, again as if we know the royals personally and have been privy to all the behind-closed-doors discussions. Did Meghan really ask Prince Charles to do this or was the Kensington Palace statement fake news? Is it a nice way to welcome her to the family? Is it sidelining Doria Ragland, the mother-of-the-bride? Surely the bigger story is sweeping homeless people off the street and not putting on a bunch of hog roasts for the people allowed into the castle grounds? Is it all just a bit weird for a father to give a woman to his son?

My first reaction was "Ick!" but I suppose the most charitable interpretation is that, even in the face of extreme awfulness by Sarah Vine, below-the-line Daily Mail commentators and other assorted racist, snobbish prudes, Meghan Markle is being supported by her new in-laws. Hell, there is a really awful sub-culture on Twitter of women who hate Meghan - they are racist, jealous and generally angry. Their comments in regard to the colour of her skin are not so much racist dogwhistles as honking great bullhorns.

For what it's worth, I like her - she comes across as fun, caring and a bit saucy. Anyone who upsets racists, snobs and prudes is fine by me. They are probably the same people who are, as I write this, whining about the multicultural BBC royal wedding coverage team - although I don't want to ruin my Saturday by going onto Twitter to see if there are idiots who are genuinely angry about the very presence of the gorgeous Naga Munchetty at Windsor Castle.

At the end of today, Meghan Markle will be the Duchess of Sussex - she has had to convert to the Church of England faith, if she has any children with Harry, they will join the in-line-to-the-throne production line and it is all part of an institution that is not based on merit, has only become moderately less sexist with the changes to primogeniture rules and could easily be thrown into confusion if an heir to the throne turns out to be gay. Her life will no longer be her own and everything she says, does and wears will be scrutinised for the rest of her life. I have no doubt that she will do what she can to continue the path of modernising the creaking old institution of the monarchy - and will probably be much quicker about choosing the causes she will support than Kate Middleton was.

Good for her and all that. Only a person with a truly rancid heart would wish Meghan and Harry a miserable marriage. Even a cranky old republican like me can smile at the sight of two people in love. If Meghan somehow brings down the monarchy, as the haters think she will, I would not be upset. But chances are, she won't cause the fall of the House of Windsor - and that will really annoy the haters.

Photography by Last Night of Freedom/Flickr
Posted by Georgia Lewis at 01:40