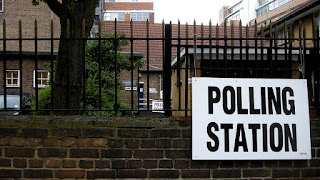 Hopes were high for post-local election gloating for both major parties, particularly in London. Here, Labour hubristically thought they might take Westminster and Kensington & Chelsea, and Wandsworth councils from the Conservatives and wrest Barnet back from no overall control. The Tories won all four.

Jeremy Corbyn had planned to go to Barnet in North London to gloat today but instead, there was a last-minute change of plans and he travelled some 240 miles to Plymouth, the one bright spot for Labour, although by no means a bellwether for the national mood. Labour gained four seats in Plymouth and the Conservatives lost one.

Theresa May, meanwhile, went to Wandsworth to gloat over a result that should surprise nobody with a functioning brain stem - the Conservatives have presided over a low council tax borough where the streets are clean, the parks are green and crime rates are low. That said, the Conservatives only clung on by 141 votes and lost eight seats, while Labour gained seven.

It is true that at local elections, local issues are important. For example, Britain is a nation obsessed by the bins - you don't have to look too far to find someone who will complain that bin collections are not frequent enough, there are too many bins, too few bins, not enough is being recycled, recycling is an onerous burden, some idiot keeps fly-tipping instead of disposing of festering mattresses responsibly and so on and so forth...

But it would be naive to suggest that people didn't use this election to give the major parties a kicking over bigger issues than bins, parking, potholes and dog poo, particularly in regard to Brexit. Leavers and remainers are feeling equally powerless as they watch this government negotiate with the European Union with all the agility of a walrus on a trapeze and struggle to figure out exactly what Labour policy on this not-so-insignificant matter. On top of this, plenty of people are dismayed with the way Labour has dealt with serious accusations of anti-semitism. Therefore, the local elections were seen by many as a good excuse for a protest vote.

So how did this pan out? It panned out pretty well for the Liberal Democrats and Greens with both parties picking up the votes of pro-remain voters, many of whom are currently feeling politically homeless.

Overall, the Liberal Democrats increased their share of the vote by three percentage points to 16% at the time of writing - they were on 444 seats nationally, an increase of 49. This included some curious results, including Labour losing a seat to the Lib Dems in the Pallion ward of Sunderland council. That would be the same Sunderland that voted 60% in favour of Brexit, despite the area's biggest private sector employer, Nissan, setting up shop there in 1984, urged on by Margaret Thatcher who successfully sold the Japanese car-maker the idea of basing a factory there because of free access to the European market.

The Green party won a few more seats - at the time of writing, they had 34 seats across the country, up from five. Interestingly, more than 80 per cent of the council seats gained by the Greens were snaffled from the Conservatives. That would indicate that there is a handful of seriously disillusioned Tory remainers out there, as well as Labour losing pro-EU voters to the Greens.

UKIP proved themselves to be a spent force in British politics with a pitiful three seats across the country, a drop of 121 seats. It would seem that the Conservative Party has scooped up these votes, suggesting the Tories are appealing strongly to a voter base that seeks massive cuts to immigration, probably doesn't give a toss about anyone affected by the Windrush scandal and is startlingly sanguine about the prospect of the UK crashing out of the EU with no deal and having to revert to WTO rules. Last night and this morning, as election results rolled in, Conservatives were happy to go on TV and say they had gained votes from UKIP.

And this is a crucial difference between Labour and the Conservatives right now - the Conservatives are taking a pragmatic approach. Plenty of Tories are appalled by UKIP but they will cheerfully Hoover up their voters. Hell, the Conservatives have cravenly taken control of Pendle council in Lancashire thanks to the reinstating of a councillor who was suspended from the party for retweeting a racist joke. It's not necessarily a principled approach but this is not an era for conviction politicians in Theresa May's desperate Conservative Party.

Meanwhile, a common tactic in the murky world of Twitter political debate among Jeremy Corbyn's increasingly delusional Momentum fans is to accuse Labour-leaning Corbyn critics of being "red Tory scum", "Blairites" and to "fuck off and vote Tory" - colour me shocked to learn that this mindless strategy has not been converted into enough votes to control crucial councils up and down England.

The results are not really a ringing endorsement for either equally incompetent party leader. The only saving grace to come out of all this is that we might be spared having to vote again this year. Another general election would probably result in a similar outcome to the status quo - and Theresa May does not need two consecutive elections in which she recklessly sought a huge mandate but emerged with a grip on power like a limp handshake. Her reputation as a "safe pair of hands" is in tatters, Brexit negotiations will continue to be a car crash, and the Windrush scandal won't quite go away, despite Amber Rudd stepping down as Home Secretary.

But it all boils down to a big pile of "meh" with a huge helping of "whevs". With votes counted in 136 of 150 councils at the time of writing, Labour has 1,896 councillors, an increase of 58, and the Conservatives have 1,256 councillors, a drop of nine. This looks like an easy gloat for Labour but their problem is that this has not translated into a red landslide of taking control of councils across the UK. And it is not an easy gloat for the Tories because nothing much really changes for them, apart from losing Plymouth.

And people up and down this green and pleasant land will still complain about the bins.

Photography by Martin Deutsch/Flickr
Posted by Georgia Lewis at 08:01