Nuance: the first casualty of war 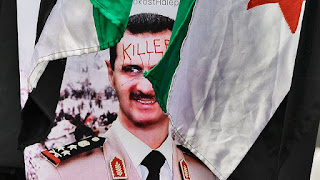 Nuance is in very short supply at the moment. All over the place, sledgehammers are being used to crack walnuts. Binary thinking is commonplace. Seeking a sensible middle ground is out of fashion. Extremists at either end of the political spectrum gain traction. We are truly living in pathetic times.

And this brings us to the disgusting spectacle of Assad gassing his own people once again in Syria. This was followed by Donald Trump ordering airstrikes without the permission of Congress, although this latest intervention has now received conditional bipartisan support. This is in sharp contrast to Trump's campaign rhetoric about not dragging the US deeper into war in the Middle East. But apparently he saw some distressing footage of gassed "children of God" on telly and now it's bombs away!

This, in turn, caused further astounding spectacles. Trumpian cheerleaders, such as Milo Yiannopolis, Paul Joseph Watson and Ann Coulter, all felt betrayed by their phlegm-haired father figure and swiftly announced their disappointment to the world. They seem genuinely stunned that Trump changes policy like he changes his socks, even though it was clear before the election that his foreign policy was always going to be a hot mess. The poor little snowflakes.

Then there was Friday's Stop The War debacle. Stop The War should perhaps be named Stop The War If It Is Waged By The West But Let's Never Call Out The Crap From Tyrants We Cravenly Apologise For Particularly As Our Chairman From 2011 Until 2015 Is Happy To Cash Cheques from Iranian State TV And Russia Today, but honesty is seldom catchy. @STWIIIWBTWBLNCOTCFTWCAFPAOCFTUTIHTCCFISTART is a rubbish Twitter handle,

For an organisation that professes to believe in dialogue instead of bombs and guns, and claims to support the rights of refugees, they were shockingly disinterested in constructively engaging with Hassan Akkad. He approached the protesters to ask them why they weren't protesting against the Assad regime but he was shouted down.

It was a disgrace. Megaphone-wielding, placard-waving fools, the lot of them. Some tosser yelled: "Keep chanting!". Because that is all these people have. They are part of a particularly loud but pointless element of left, and they are as devoid of nuance as Trump's one-eyed fanatics. And, just like Trump's disciples, they hate constructive discussion and seek to silence anyone who might have a different take on things. They are ferociously pro-censorship unless it's something they agree with, something else they have in common with alt-right lunatics.

Hassan Akkad is a Syrian refugee living in the UK. He has been imprisoned and tortured under the Assad regime. He knows first-hand that Syria is not a triumph of secularism, an offensive and ludicrous claim made by many an Assad apologist.

Akkad is an intelligent man who is worth listening to. Here he is sharing the story of his escape from Syria:


Everyone who howled him down at the Stop The War fiasco should watch that video, hang their heads in shame, and personally apologise to him for failing to engage in dialogue or to even try and understand the story of a refugee. Everyone there was a hypocrite.

The protesters refused to listen to a word he had to say. Akkad knows that Trump has no great affection for the Syrian people. He knows that Trump has his own agenda. He also knows that to oppose Assad is to not be an automatic jihadist. And he understands that destroying the airbase in Syria from above is not necessarily a bad thing. Unlike the Stop The War protesters, he is capable of nuance.

Click here to watch the video he tweeted, where he articulately explains his version of events from the protest.

The simple truths are that Assad and Daesh both need to be stopped. A military campaign solely made up of airstrikes will not achieve this. I am not going to pretend that I am sitting here at home in London holding all the answers to the appalling situation in Syria. War is awful but I do think boots on the ground are needed to wipe out Daesh and quite possibly to help the oppressed people of Syria overthrow Assad. Indeed, it has been reported today that US-supported rebels in Syria, with Jordanian and US support, fended off a Daesh assault. The very nature of the conflict, of the geography, of the joint enemies of Assad and Daesh, mean any military action will be long and grinding.

A humane solution for the people displaced by the conflict is also essential. Syria has degenerated into a place where it is hard to tell who the bad guys are and anyone who whines about young, able-bodied men fleeing the conflict would do well to remember this before shooting their damn fool mouths off from the comfort of countries that are not currently war zones.

Boris Johnson has done the right thing by cancelling a trip to Moscow and attending a G7 meeting instead. Anyone who thinks Putin is not in bed with Assad is either naive or stupid. Johnson is in no way suited to the job of foreign secretary, although at least this means he is not behaving like Basil Fawlty in Brexit negotiations. Whether the G7 meeting will lead to a ceasefire and whether any ceasefire will last longer than a New York minute remains to be seen, but it is better than kissing Putin's arse.

Dialogue is essential, military intervention will be a necessary evil, nothing will happen quickly. And if we listen to the experiences of people like Hassan Akkad, people who have lived through the long-term horrors of life under Assad, it might become clear that removing Assad from power and neutering the outrageous influence of Russia are essential to this tragic, horrific process.

Image by zio fabio/Flickr
Posted by Georgia Lewis at 14:22