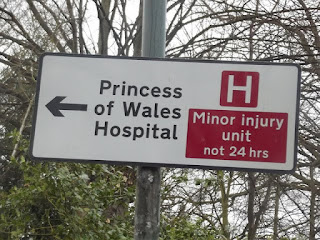 Amid this week's entirely justified furore about the Daily Mail's "legsit" front page in which Theresa May and Nicola Sturgeon's Brexit/Scottish independence discussions were reduced to body parts, there lurked another steaming turd that demanded closer inspection.

Directly below the calf-obsessed photo of our two most senior politicians, there was a deafening headline about NHS reforms that will apparently fix everything and save billions of pounds. The Daily Mail was selling the story as if the reforms are a good thing, the Daily Mirror was taking the opposite view, pointing out longer waiting times and no extra money being spent on the NHS by the current government.

But without an electable opposition, this does not really amount to a hill of beans. That said, shadow health secretary Jonathan Ashworth did a solid job when he was interviewed by Sophy Ridge on Ridge on Sunday this morning. Whenever Jeremy Corbyn quits hanging around the Labour Party leadership like a fart in a car, I'd urge his replacement to keep him on.

In the meantime, however, people continue to prove the notion I put forward last time I blogged on the NHS which is that there is still plenty people will tolerate in terms of stupid healthcare reforms before they will get angry.

The Tories currently own the "free at the point of use" rhetoric - as long as people are not noticing any real difference to the healthcare they receive, it is very hard to get people to care about issues such as taxpayer money going to private companies to provide services formerly provided by the NHS, or private companies getting away with all manner of crap because they are exempt from Freedom of Information laws. The cost of administration of NHS contracts, which renders any cost savings meaningless, is not being discussed especially widely and the billions that are sucked into the PFI debt vortex each year is a problem consigned to the too-hard basket.

The cold reality is that stories such as the Daily Mail's splash about a "blueprint to save the NHS" are swallowed en masse without too much thought. If only more people got their news about the NHS from Private Eye instead.

"Dramatic drive to cut costs unveiled that will see dolling [sic] out of painkillers scrapped and GPs ordered to crack down on health tourists" is the online headline that sets the tone and the agenda.

The health tourism line is routinely trotted out because it appeals to xenophobes. Sure, there is an argument for ensuring that those who are not entitled to NHS care pay up but it is delusional to expect that to magically fill a funding hole - it makes up around 0.3% of NHS spending. Additionally, since 2015, non-EEA citizens who come to the UK for more than six months as students or temporary migrants have paid a health surcharge as part of the visa process. But because the figure is estimated at £300 million, the outrage ensues. Daily Mail readers are held in utter contempt by the paper with the editor and his acolytes assuming they will be dazzled by a big number, the kind of figure very few of us will ever see in our bank accounts.

And the Daily Mail is at it again in this week's report, dazzling its readers with the claim that Simon Stevens, chief executive of NHS England, has a plan that will "save the Health Service up to £1 billion in two years". So all these plans might save around half a billion per year out of an annual budget of around £120 billion. Meanwhile, PFI has left the country £222 billion in debt.

As ever, people are getting excited over plans for the NHS that are the equivalent of getting 20 plumbers over to fix a leaking toilet while nobody is being called on to look at the house's crumbling foundations.

As for the painkillers crackdown, if the NHS simply used its enormous purchasing power better, it would be procuring painkillers far more cheaply. In any case, painkillers will still be given to patients in hospital and the whole "make people pay for their own Panadol" rhetoric is pretty lame. Don't tell Simon Stevens this, but most of us already do buy painkillers for ourselves.

The plan also includes making people pay for their own indigestion and hayfever remedies. Again, millions of us across the country already do this. Even the most die-hard NHS defender probably just pops a pill from the bathroom cabinet in the event of a hangover, a springtime sneezing fit or a growling stomach after too much curry.

The move by Stevens to crack down on GPs prescribing gluten-free food is another pretty stupid distraction. At a cost of £25 million a year, it is far from the NHS's biggest cost pressure but the NHS does get ripped off by suppliers charging it more than supermarkets, but a voucher system for supermarkets would solve that problem - or, once again, better procurement.

In any case, prevention is better than cure, for patients' wellbeing and in terms of cost-efficiency, and ensuring coealics have access to gluten-free food is a good example of this. But it's another easy, lazy headline if people think the NHS has become a gluten-free outpost of Greggs.

Then there is the scandal of the NHS funding unscientific, non-evidence-based homeopathic treatments. It is hard to come by exact figures on how much of our money is spent on woo and bunkum but the excellent Good Thinking Society estimates it at around £5 million per year. Again, it is a drop in the ocean - although still a dazzlingly large sum of money in Daily Mail land - but any plans to entirely scrap this bullshit from the NHS is absent from Stevens' plans. At least the funding of gluten-free food and painkillers is based in science. But with Jeremy Hunt being a homeopathy-loving health secretary and Jeremy Corbyn being a homeopathy-loving ageing student protester, this won't change any time soon.

Unsurprising to anyone who has been paying attention, Brexit will cast a long shadow over any attempts to fix the NHS, including this latest blueprint from Simon Stevens. It is all well and good to desperately tweet "FORGET ABOUT BREXIT! THE NHS IS BEING DESTROYED!" but the harsh reality is that Brexit is now inextricably tied to the future fortunes of healthcare in this country.

The plan includes trying to ensure NHS managers don't hire expensive locum doctors but we are facing a Brexit-induced doctor shortage. A British Medical Association study found that 42% European doctors are considering leaving the UK following the Brexit vote and another 23% are unsure. Out of 10,000 EU-trained doctors, that is a significant number we could lose.

On top of this, from July GP surgeries will be acting as border control when they will be obliged to check if all patients registering have a European Health Insurance Card (EHIC). These are issued by one's home country and entitle EU citizens to NHS care on the proviso that their government pays back the costs. If someone is turned away from a surgery for not having the EHIC, they can simply go away and obtain one and then register. But this alleged reform sounds like it's going to be punitive for EU citizens so it holds appeal for Brexiters.

Additionally, we in the UK are entitled to the EHIC so we can receive medical treatment in Europe. It is a wonderful thing because it works both ways - but once we leave the EU, we will probably lose that entitlement. Possibly. When the blisteringly incompetent Brexit secretary David Davis was quizzed on this by Hilary Benn at the Brexit Select Committee this month, he said he did not know what would happen to our access to the EHIC. He admitted that his department had not looked into this not-insignificant matter.

So there you have it, kids. A blueprint to save the NHS that merely tinkers around the edges, with bonus features that will probably be rendered pointless thanks to the idiocy of Brexit, all brought to you by the Department of Smoke and Mirrors.

Photography by Elliott Brown/Flickr
Posted by Georgia Lewis at 12:23