Enough with the "random nutter" narrative 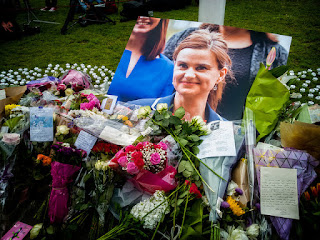 We reached peak desperation from the right-leaning media last week when the Daily Mail website ran the following headline in relation to Thomas Mair, the man convicted and sentenced to a whole life term for the senseless murder of Labour Party MP Jo Cox: "Did Neo-Nazi murder Jo over fear he'd lose council house he grew up in? Terrorist thought property could end up being occupied by an immigrant family - and the MP wouldn't help him."

Firstly, fear of losing your council house does not justify shooting and stabbing a woman in the street in broad daylight. Secondly, the headline is nothing but vile speculation. Thirdly, it is stunning that we are meant to feel sorry for a man who is a textbook terrorist. He embodies the definition of a terrorist as someone who uses violence in pursuit of political aims.

We didn't find out until his trial that he repeatedly yelled: "Britain First!" and "This is for Britain! Britain will always come first!" as he murdered Jo Cox. It is disingenuous at best to think he was merely expressing a desire to put British interests first. As he killed a 41-year-old mother of two in cold blood.

Britain First is an extreme right political party that has been very successful on social media, but not at the ballot box, because of people unwittingly sharing their Facebook posts about issues most people largely agree on, such as opposing animal cruelty or helping homeless veterans, without realising they are a racist organisation. And there are enough people out there who agree with their bullshit and give it traction online.

The fact that he appears to have acted alone, that he was a lonely man, has softened the hard right narrative about Mair. But terrorism is not defined by the number of people involved in the act. It is about the motivations and Mair's motivations were political.

Because he did not kill Jo Cox while shouting "Allahu Akhbar!", because he is a socially awkward white man, he is more easily dismissed as a lone wolf, a random nutter.

The "random nutter" narrative is appalling. It is deeply insulting to all the people in Britain who struggle daily with mental health issues and manage to get through each day without committing murder. It minimises the seriousness of Mair's crime, it is a sly and repulsive distraction from his true motivations.

Just because he was a man of few friends, it does not mean his actions happened in a vacuum.

When Mair's house was searched, police discovered books on Nazi Germany, Nazi memorabilia, newspaper cuttings about Jo Cox. In the days and weeks before he committed his sickening act of terror, he searched online for information on whether a .22 bullet could kill someone if they were shot in the head, the human liver and vertabrae, political prisoners, serial killers, Nazi Germany, murders committed by the Ku Klux Klan, Jo Cox's Twitter page, coffins, paupers' funerals, lying in state, the anti-semitic and white nationalist Occidental Observer, former Conservative MP William Hague, and Ian Gow, who was the last MP to be murdered.

Mair is part of the extreme right and his views came about in the midst of anti-immigrant sentiments screaming from newspaper front pages. Sure, he took this to extremes with a house of Nazi paraphenalia but he is a product of a culture where it is perfectly OK to demonise all immigrants without question, to quote poorly extrapolated statistics about issues such as "health tourism" and refugees.

Welcome to the post-fact world! And the post-fact mentality, so beloved of ridiculous, hate-filled caricatures such as Milo Yiannopolous, has led to a post-responsibility mentality. The likes of the Daily Mail would sooner concoct a load of tripe about a family of imaginary immigrants threatening to move into poor little Thomas Mair's council house than take any responsibility for the messages they spew out that contribute to racism in this country and reduce constructive debate to a load of ill-informed noise.

But if we are quick to dismiss Mair as a random nutter, as someone whose obsession with Nazism is reduced to a cute eccentricity, we do ourselves no favours as a society. Mair, and people like Mair, are dangerous, hate-fuelled people.

I know this because I am related to one such person. My uncle, Stephen Lewis, died of cancer in Australia last year. It was a tragic death for its pitiful loneliness even if I do not miss his presence in my life. But while he was alive, I would tell people that if he went on a rampage with one of his guns, I would not be at all surprised.

Like Mair, Stephen had a house full of books on Nazism. They were stored in an orderly manner on his bookcase, with labels about their specific topics written on masking tape and stuck to the shelves. He dressed in army camouflage. He lived alone for most of his adult life. When he did speak, it was often to say something misogynistic or racist or homophobic. He was, most likely, a closeted, self-loathing gay man who felt like he could not come out, despite one of his cousins coming out as a lesbian without negative repercussions in my family.

He used to write bizarre letters to my grandfather when he was living in a nursing home, suffering from dementia. My grandfather never opened his mail so it was usually my father or I who would take a look. His letters described me as a "mongrel bitch", he told my grandfather I was working as a prostitute in the family home and, chillingly, said I'd be a "good target for his new gun".

And, like Mair, he was a man who had no real friends. In a sad way, this gives me hope for both Australian and British societies. It is darkly reassuring that I live in and hail from a society where the man who dresses in army camouflage, hoards Nazi books and memorabilia, owns guns, and whose conversation veers constantly to the racist, the sexist and the homophobic is a lonely man.

Bu while Mair and Stephen live on the fringes of society, never quite fitting in, struggling to hold down a job or form meaningful relationships, it has become quite clear by some of the revolting reactions to the murder of Jo Cox that such men have their sympathisers, their apologists and their defenders.

When the hatred boils over into acts of deadly violence against innocent people and people excuse this hatred and violence, we have a real problem. To pretend it's not political is to solve nothing.

Photography by Garry Knight/Flickr
Posted by Georgia Lewis at 14:13