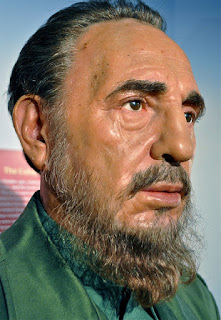 Fidel Castro is dead. And I, for one, will not be shedding a single tear for his passing.

As a journalist, I cannot mourn the passing of a man who on the day of his death left behind a country ranked at just 171 on the Reporters Without Borders World Press Freedom Index. Cuba is ranked 171 out of 180 countries. It is dwelling at the bottom with other press freedom dumpster fires such as North Korea, Eritrea and Syria. It rates lower than Saudi Arabia, Iran, Iraq and Turkey.

Just last month, Cuba arrested journalists who were attempting to cover the Hurricane Matthew disaster. Equipment was confiscated, and in the wake of harassment in recent months, some journalists have fled the country.

Raul Castro's calls for reforms in 2010 have been meaningless. The regime has almost 100 per cent ownership of all media outlets. Access to the internet for citizens is severely limited. Only around 5 per cent of Cubans have internet at home, all internet comes via the government-owned telco Etecsa. Opposition websites are blocked. There is no real editorial independence in Cuba. Censorship and threats to journalists trying to do their job are par for the course.

We will never know for certain how many people have been murdered under Fidel Castro's regime. The Cuba Archive has documented 3,615 firing squad executions since 1959. It's not on the same scale as the deaths under Stalin, Hitler, Pol Pot or Mao but the mentality is the same - wipe out opposition and dissent through executions, a legal system without due process and labour camps.

Why would anyone who claims to chreish freedom, who is appalled by capital punishment, who believes in free and open political debate be OK with such repression, regardless of the scale?

Yeah, that's great as long as the educated, healthy people can actually fulfill their potential, travel freely, express their views freely, and enjoy access to a free press and a polling station once in a while. Have the apologists not noticed that plenty of countries have great educational and healthcare options and democracy? It should not be an either/or situation.

"BUT WHAT ABOUT THE US?!" the apologists yell.

It is precisely this non-nuanced, binary thinking that is turning the world into an idiocracy. It is possible to be angry about more than one thing. There is plenty to criticise the US over, especially in terms of foreign policy over multiple decades. But none of this will bring back the people who were on the receiving end of Castro's firing squads, or reunite families who have been separated, or bring peace to those who want to practice their faith without state repression.

People have risked their lives in dangerous sea voyages to escape the Castro regime. Yet it is stunning how many people who, I am certain, are quite rightly sympathetic to refugees escaping brutality, economic hardship and repression by sea in other parts of the world are seemingly unbothered by the plight of those who felt they had no choice but to leave Cuba. The hypocrisy is breathtaking.

Instead, I stand with the people who are dancing on the streets this weekend. The mere fact that I can sit here in London and criticise both the US and Cuba, and indeed Britain, without fearing for my life speaks volumes. Make mine a Cuba libre.

Photography by Kevin Burkett/Flickr
Posted by Georgia Lewis at 05:18