An open letter to left-leaning Brexiters 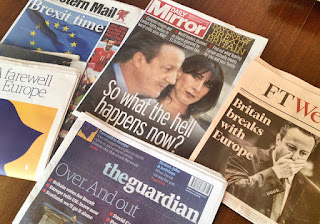 What the everloving fuck were you hoping to achieve? What the everloving fuck did you think would happen if the majority actually did vote to leave the EU? Did you really think leaving the EU would amount to some sort of socialist victory? Why could you not see that it was a choice between two forms of capitalism? Are you really so dim as to believe that leaving the EU was going to herald some sort of workers' revolution?

"But this means we're free from TTIP!", I hear you whine.

TTIP has been killed, largely by France. France has been against TTIP from the get-go and in August, President Hollande stalled negotiations again. Couple this with growing opposition in Germany and Angela Merkel desperate to retain power, and there you have it - the two big hitters of the EU in no position to proceed.

But it isn't just French obstruction or a strong German protest movement that is halting TTIP. Labour and Green MEPs were doing excellent behind-the-scenes work to negotiate terms, going through TTIP with a fine toothed comb. Unfortunately, "behind-the-scenes" are the operative words here - nobody bothered to find out about what our MEPs were doing for us. And soon we will have no MEPs, no power of veto in Brussels, and we will be wide open to a US-UK trade deal, regardless of who wins the US election. If anyone thinks that will be a win for Britain, they're deluded.

"But I wanted to kick Cameron out!", I hear you moan.

Yeah, about that. How is that working out for you, dear lefties? When Cameron quit, the glee was palpable on the left, even though at the time, it seemed to herald an inevitable Boris Johnson move to 10 Downing Street. When that fell through, and Andrea Leadsom revealed herself to be awful and inept all at once, Theresa May became prime minister by default. And she is embracing hard Brexit and pandering to the hard right Brexiters like a long lost lover. So much for the safe pair of hands. It is more like a stampeding pair of jackboots at the moment.

And if you are Lexiter who claims to care about the NHS or scientific research or access to the latest medicines, please hang your head in shame. You are part of the problem, contributing to a vote that will probably end freedom of movement and further compound NHS staffing woes, could cost us our European Health Insurance Card for medical treatment in the EU, the risk of lost research funding as part of the EU, and missing out on being part of clinical trials as part of the harmonised approach to medicines regulation. And you have pretty well lost the right to berate Jeremy Hunt about his ridiculous plan to grow more British doctors, despite making the medical profession less attractive than it has ever been to bright students.

Feel free to wave placards about hospital closures and cuts if you like, it's allegedly a free country, but do know that your vote to leave the EU will make whatever we have left of our health system even more precarious. You are just as absurd as anyone who voted to leave the EU because they genuinely believed Boris' bus of bullshit with the stupid "£350 million for the NHS" claim.

Sorry, Lexiters, but you have dropped a bollock. You have helped the hard right usher in a new era of awful policy and there are plenty of aspects of the Theresa May-led hard Brexit that are appealing to a wide number of people. On top of this, we're left with a hapless opposition with which the hard left is enamoured, even though peak Corbyn has been reached with a stacked and skewed inflated membership. Sorry, but this does not actually reflect what the wider electorate is thinking or wants for Britain. Theresa May is currently on a mission to out-UKIP UKIP and it is working. She is being very careful to find just the right level of UKIP-ness for the electorate to tolerate to keep the Tories in power for a very long time.

For those who voted Brexit because they wanted a hard Brexit with no access to the common market and no freedom of movement, congratulations on getting what you signed up for on 23 June. For everyone else who voted out with a completely different idea of what Brexit might look like, you've made your bed and now we all must lie in it. And for those who voted Brexit because they genuinely thought it would result in some sort of socialist revolution, you are genuinely dangerous and stupid.

If I have offended anyone, I really don't care.

Photography by threefishsleeping/Flickr
Posted by Georgia Lewis at 08:59