Reflections on a visit to Auschwitz-Birkenau 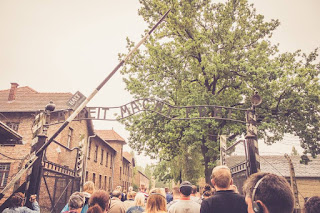 "For ever let this place be a cry of despair and a warning to humanity..." These are the opening words on the inscription at the memorial to people murdered by the Nazis at Auschwitz-Birkenau. And despair is the operative word for it is hard to imagine anyone leaving this place without a pall of despair hanging over them.

A visit to Auschwitz-Birkenau is a visit to a place where the banal and the horrific intersect at every turn. At the Auschwitz site, my first thought was that the infamous "Arbeit macht frei" sign over the gate, a grotesque misrepresentation of what it means to work for living, was not as imposing as it appeared in my high school textbooks. Indeed, the whole Auschwitz site, at first glance, was not particularly terrifying and it is easy to imagine why countless innocent people may have been lulled into a false sense of security upon arrival. I felt a sense of guilt when I noted the stylishness of the art deco exterior lights on the buildings, which were formerly army barracks. But it somehow compounds the horror, that a place with elegant 1930s architectural detail still intact was also a place so unspeakably awful.

And once inside, it becomes clear that the buildings, which served as prisons, offices, laundries, execution facilities and even a brothel are very close together. The mundaneness of the laundry was being done next to a building where people died in starvation cells or were punished by spending all night in a standing cell, measuring just 90cm by 90cm, with three other people, before having to work all day the next day. The vile inventiveness of such inhumanity was overwhelming.

The display of thousands of shoes confiscated from prisoners on arrival was another incidence of the banal meeting the horrific. The sheer range of shoes piled high behind glass on either side of a darkened corridor was astounding - shoes in every size, men's shoes, women's shoes, children's shoes., boots, bedroom slippers, shoes that were meant to be worn to parties - along with all the household items people brought with them to Auschwitz-Birkenau, it becomes clear very quickly that these helpless people thought they were going to be resettled rather than sent to be summarily executed or worked to death.

Again, I felt guilty when I spotted a pair of shoes in that tragic pile that I would choose for myself. But then that's the whole point of this sort of display. In different circumstances, it could one day be any one of us forced from our homes, gathering whatever possessions we could in the pitiful hope that our oppressors might just let us live peacefully somewhere with the people we love. The room full of household objects the prisoners took with them is heartbreaking testimony to the fact that, despite what the Nazi regime had already done, many still thought they were simply being resettled.

If I had been rounded up into a ghetto then bundled onto a cattle train in the early 1940s, then had to face selection - to be sent to the right to be sent to gruelling work or to the left for extermination - I'm pretty sure the guards would take one look at the scars on my club feet, and note that my feet were swollen from days of standing in the train and I was struggling to stand, let alone walk, and send me to the left. At the Birkenau site, a few minutes drive away, we traced the terrible path so many people took from the train to the gas chambers.

Like other genocidal regimes, the Nazis were fond of getting rid of educated people, the people they considered the "elite" - the writers, the teachers, the people who might question the brutality, the anti-semitism. Eliminating such people eliminating press freedom was essential for the enforcement of a cruel statist regime where conformity and mindless obedience would help ensure survival or even promotion.

When people today, from the left or the right, slag off the "elite" but actually mean educated people, it seems facile to cry "Godwin's law!". But visiting Auschwitz-Birkenau throws the whole notion of Godwin's law - the internet adage that the longer an online discussion takes place, the higher the likelihood of someone making a comparison to Hitler or Nazism becomes - into a tailspin.

Dark, gruesome extremes kept reminding me of things that are obviously not nearly as bad as Hitler or Nazism. The standing cells denied workers even the basic right to sleep and, absurdly, this made me think about what might happen if UK workers lose the protection of the European Working Time Directive. The whole place made me think about what a post-Brexit Britain may mean for human rights.

Hitler's effective censorship played a big role in keeping the media to his message, with little room for deviation or dissent. Our guide at Auschwitz-Birkenau spoke about Nazi control of the media. I kept thinking about all the people, especially those on the left, who constantly make attacks on a free media. Calling for the BBC's Laura Kuenssberg to be sacked (which I think is an utterly appalling thing to do) or the more unworkable bits of Leveson's recommendations are not quite the same as the Editors Law of 1933, where registries of "racially pure" journalist were kept, journalists had to register with the Reich Press Chamber and editors were legally bound to redact anything "calculated to weaken the strength of the Reich abroad or at home". But the obsession with an ideologically "pure" media - as in a media that never dares print anything you might disagree with - is dangerous and anti-freedom. It is still a mentality that has at its heart a desire to control what newspapers print and what radio and TV broadcasts to suit a single agenda.

It also made me think a lot about how a united Europe is surely better than one that is fragmented and, as is the case now, moving in multiple places towards the far right. Incidences of people being singled out on the basis of their race or religion are still happening, and seem to be happening more at the moment, with police stats bearing this out across parts of the UK.

On a global scale, ending the atrocities of Nazi Germany did not mean an end to genocide. Cambodia, Rwanda, Bosnia all happened since 1945. Human rights abuses didn't come to an end. Racism didn't stop. Singling out people on the basis of race and religion carries on unabated. There are still anti-semitic morons who deny or downplay the holocaust.

The cry of despair on the memorial's inscription remains, utterly depressingly, a cry in the dark that has, in many corners of the world gone unheeded in many ways. And that is the biggest tragedy of all.