We need to talk about Jeremy 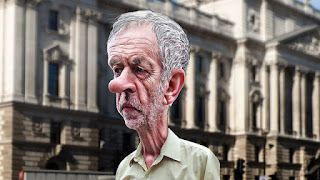 The NHS should be a gift for Labour right about now. The opposition should be scoring points left, right and centre given the sorry state of the NHS at the moment. Jeremy Hunt is still the Health Secretary, clinging to the post like an incompetent, gurning barnacle, there is no end in sight to the junior doctors' dispute, and the little-reported Sustainable Transformation Plans threaten the future of hospitals across the land.

So naturally, in his first question time facing the new Prime Minister this week, Theresa May, Jeremy Corbyn didn't mention any of these things and opened the session with a question about the Orgreave Inquiry. Don't get me wrong - the events of 1984 involving a violent confrontation between miners and South Yorkshire police deserve scrutiny and bereaved families deserve justice and closure - but as far as opening gambits go on one of the most-watched sessions of Prime Minister's questions for 2016, it was not ever going to dominate the headlines. That is the harsh reality of modern politics. Dominate the news cycle or die. It's a shame Seamus Milne does not seem to understand this.

Theresa May didn't really give a straight answer to any of the questions anyone asked her but she didn't really have to. She just did an obviously rehearsed Diet Coke Thatcher routine and got away with it. Corbyn could have kicked off with an excoriating NHS question but he didn't. Instead, Labour MP Jamie Reed and Liberal-Democrat leader Tim Farron were the only members to mention the NHS. Reed invited Theresa May to visit a hospital in his constituency.

Corbyn - and his Labour leadership challenger, Owen Smith - are saying the same NHS soundbites that every NHS defender wants to hear. That it should be publicly funded, publicly run and free at the point of use (although this caveat leads to multiple interpretations on how the services should be provided and by whom). And it is only right that over the course of the Labour leadership campaign, both Corbyn and Smith are vigorously questioned on NHS policy and how it will be funded. Of course, if a journalist dares ask Corbyn a hard question on pretty much anything, the Corbynistas come out, pitchforks aloft, crying: "MAINSTREAM MEDIA BIAS! BLAIRITE MEDIA! RED TORY JOURNALISTS!". And then daft e-petitions do the rounds demanding journalists be sacked and that nobody rest until the BBC morphs into Pravda.

It's pathetic and it demeans democracy.

Owen Smith has been called out because he used to work for pharmaceutical company, Pfizer. And, if he is a potential future Prime Minister, he should expect his entire CV to be scrutinised with the same forensic brutality Andrea Leadsom was subject to before she stepped aside for Theresa May.

But the understandable desire to criticise Smith's previous employment turned into something utterly ridiculous under Corbyn's leadership this week. The desperation to slag off Smith and, as a bonus, big pharma, led to pitiful back-of-a-fag-packet policy formed on the hoof.

Jeremy Corbyn said: "I hope Owen will fully agree with me that our NHS should be free at the point of use, should be run by publicly employed workers working for the NHS not for private contractors, and medical research shouldn't be farmed out to big pharmaceutical companies like Pfizer and others but should be funded through the Medical Research Council".

Not only did Corbyn fail to make it clear exactly who is "farming out" research to pharmaceutical companies, but he clearly advocated full nationalisation of all medical research. How else could this statement be interpreted?

This morning on Marr on the BBC, shadow chancellor John McDonnell was asked about this statement. He insisted that Corbyn was "misrepresented". McDonnell said medical research needs to be "better managed and more effective" and that we should be "increasing our resources". Fine. Fair enough. That all sounds great but one would expect the shadow chancellor to be able to explain how this would be funded.

Last year, the Medical Research Council spent £506 million on research grants. It's one of those figures that sounds like a lot of money to most of us because it's a figure we'll probably never see when we pull a mini statement out of an ATM. But Pfizer spent £4.8 billion. One company alone had a research budget to dwarf that of the MRC. If Corbyn and McDonnell are serious about implementing such a policy if they ever manage to take hold of the levers of power, they had better explain how it will be funded. That is their job as an alternative government, to explain how they would alternatively govern.

On the BBC, Andrew Marr pointed out that the policy of cutting back tax breaks on research for pharmaceutical companies would only save around £200 million per year. McDonnell floundered again, saying Corbyn was not about taking money away from companies but he was about "managing it more effectively so it's better used". Marr went on to add that the MRC has a budget of less than a billion pounds per year and that it costs more than that to bring one single drug to market.

Naturally, Twitter exploded with frothing Corbynistas fulminating on "BBC right wing bias". No. It was merely a case of Andrew Marr doing his damn job. We still have no idea how the Labour Party would pay for all this medical research if the MRC was to take over. When medical research is currently under a large, Brexit-shaped cloud, the policy Corbyn announced is reckless, irresponsible and unaffordable.

There is plenty wrong with private sector involvement in the NHS as it stands at the moment, as a result of the Health and Social Care Act 2012. In my area alone, Croydon University Hospital's urgent care facilities are being run into the ground by Virgin Care and led to an unnecessary death, G4S still has the patient transport contract for St Helier Hospital despite killing an amputee who was not properly secured, and I have been unable to get a straight answer from the Epsom-St Helier Trust as to whether there is any link between an alarming spike in MRSA infections and hospital cleaning being farmed out to a private company.

But the NHS will still have to procure things. Many, many things. It is unrealistic to nationalise production of every single thing the NHS needs to function, from bed linen to brain scanners. They need to be bought from companies and the NHS has a responsibility to taxpayers to use its enormous purchasing power effectively.

Hell, why didn't Corbyn mention the NHS Reinstatement Bill in question time this week? After all, he is one of the supporters of the bill but how many people out there have actually heard of it?

On top of all this, Jeremy Corbyn has, like Jeremy Hunt, indicated he would support NHS-funded homeopathy. The two Jeremys would like to see our taxes fund non-evidence based bunkum. So that's awkward.

You'll have to forgive me if I'm not exactly confident that a Corbyn government would effectively run the NHS. But what would I know? I'm just a red Tory scum journo...

Image by DonkeyHotey
Posted by Georgia Lewis at 15:53